U.S. Residents Now Include 61 Million Immigrants and Their Minor Children

The latest analysis of Census data from Center for Immigration Studies hardly needs any words, since the basic graphic tells all: 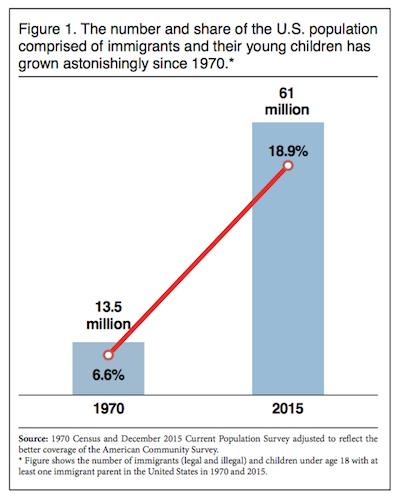 Obama’s promise to “fundamentally change America” looks moderately successful but really is a late-comer’s claim to have created something that has actually been building for decades: the deed was done by 1965 immigration legislation and the demographic effects have been accumulating ever since. The evil changes Obama has managed to push through have only been possible because the nation is becoming increasingly less American.

It’s useful that the CIS count includes the minor children of immigrants as well as the newcomers themselves: the offspring are a difficult group, being neither fish nor fowl, neither foreign nor culturally American after growing up in an immigrant household. Their split identity causes a number to turn to gang formation, a fact which sociologists have noticed. The same anti-assimilation urge also shows up in jihad activities among young Muslims.

The report, 61 Million Immigrants and Their Young Children Now Live in the United States, includes these findings:

You can read the complete CIS study here.

Immigrant families account for 61 million people in the U.S., according to research released Monday that raises questions about the extent to which immigration affects everything from schools to congested cities to the future of Social Security.

The level marks a staggering increase over the past 45 years, from 13.5 million in 1970, according to the Center for Immigration Studies, which crunched the numbers based on Census Bureau data from December.

Steven A. Camarota, research director at the center, said the numbers should spark a conversation that has been missing from political debate, which has focused too heavily on illegal immigration, missing the much larger share of legal immigrants who are shaping the country.

“The fundamental questions that have to be asked are not even being asked. What is the desirable level of immigration?” he said. “Most immigration is legal. We have 45 million legal immigrants and their kids living in the United States right now. That has enormous implications across public policy.”

Nearly 1 in 5 U.S. residents live in an immigrant family — a figure that has grown rapidly. The overall share of immigrants as a percentage of the total population is nearing record levels set at the turn of the 19th century, and the Census Bureau’s projections suggest the U.S. will break that mark in 2023, Mr. Camarota said.

Total benefits or costs resulting from immigration are difficult to pin down. The Congressional Budget Office has concluded that legalizing illegal immigrants and bringing in millions of new workers over the coming decades could boost the economy and save the federal government hundreds of billions of dollars — though wages for some native-born workers would drop as a result of competition, and the economic gains would be spread out among more people overall.

Mr. Camarota said immigrants use welfare programs at higher rates than native-born and cities and states should begin to consider other effects such as congestion and additional pollution.

“You might respond, ‘Oh, with the right planning it can all work out.’ Maybe. But to not even have a debate about it? There are just these really important questions that no one’s asking,” he said.

Even the cursory debate the Republican presidential candidates have had over whether to boost or cut immigration has caused hiccups, with Donald Trump the latest to stumble last week.

His campaign had taken a stance that he would trim the H-1B visa program that recruits highly skilled foreigners to take jobs in the U.S., particularly in computer science and engineering fields. But at last week’s debate, Mr. Trump said he was changing his stance and wanted to admit more H-1B applicants.

“I’m changing,” he told Fox News moderator Megyn Kelly, announcing his shift. “We need highly skilled people in this country, and it we can’t do it, we’ll get them in.”

Minutes after the debate, though, he recanted.

“Megyn Kelly asked about highly skilled immigration. The H-1B program is neither high-skilled nor immigration: These are temporary foreign workers, imported from abroad, for the explicit purpose of substituting for American workers at lower pay,” he said in a statement.

Sens. Marco Rubio and Ted Cruz, likewise, have backed off of support for a massive influx of immigrants.

On the Democratic side, the issue has received even less attention — though Sen. Bernard Sanders has voted to cancel at least some immigration programs.