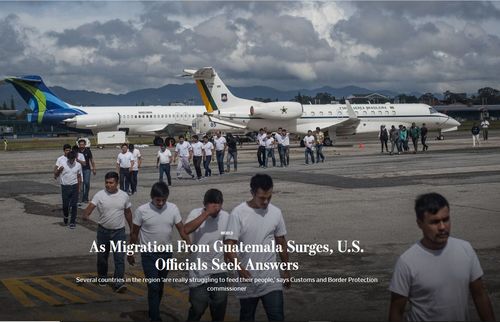 U.S. Officials and the WSJ Puzzled By Reason For Guatemalan Surge—Mexico Is The Answer

The Wall Street Journal tells us that the Guatemalan exodus to the United States is surging, and that august journal and U.S. officials are trying to figure out why.

QUETZALTENANGO, Guatemala - These rugged rural highlands bordering the Pacific Ocean have become a prime source for the skyrocketing number of immigrant families crossing the U.S. border illegally and asking for asylum. Migrant families from Guatemala seeking asylum in the U.S. have surged past those from neighboring El Salvador and Honduras. More than 42,000 Guatemalans traveling as families were arrested at the U.S. border from last September through August, up 71% from the same period a year ago, according to federal government data.
As Migration From Guatemala Surges, U.S. Officials Seek Answers, by Alicia A. Caldwell, Wall Street Journal, October 13, 2018

OK, but for Guatemalans to get to the United States they have to cross through Mexico. That means either Mexico can’t or won’t stop the Guatemalans passing through.

As of August, more than 90,000 immigrants traveling as families had been arrested at the border over the past 11 months, up 27%. That figure likely reach about 105,000 by September, the end of the federal fiscal year, according to a person familiar with the government’s border arrest data. The prior high for a full fiscal year was 77,000. The record number of asylum-seeking families has overwhelmed border agents and immigration authorities. Border Patrol facilities are crowded with newly arrived families, bed space at family detention centers in Texas is at a premium and immigration court backlogs are growing.

Authorities suggested there is little more they can do from the U.S. side of the border to deter people from coming into the country illegally. Attempts to increase deterrence—including the Trump administration’s controversial family separation policy that was abandoned in June—haven’t been effective in slowing the influx of families.

So why is Guatemalan migration to the U.S. up? That’s what the article struggles with.

I have a few suggestions that aren’t mentioned in the article.

And once again, why is Mexico allowing all these Guatemalans to pass through their territory?

All of these factors are ignored by this Wall Street Journal article.

U.S. Customs and Border Protection Commissioner Kevin McAleenan went to the area seeking to understand why so many Guatemalans are heading north.

So a U.S. official wants to figure this out. After all, says Caldwell

Understanding why migrants leave their home countries could help government authorities develop programs to deter them and ease the continuing family migration crisis at the southern U.S. border.

So as for“U.S. Customs and Border Protection Commissioner McAleenan, “[b]efore his trip, he suspected hunger to be the leading cause.” After all "Several countries in the region “are really struggling to feed their people,” Mr. McAleenan said in an interview."

The article quotes Guatemalan NGO activist Lorena Lopez Mejia, who reported widespread malnutrition among Guatemalan Indians. Also, there are problems of access to land or crops.

But these problems would be better dealt with in Guatemala than by having Guatemalans trek across Mexico to get to the United States.

As for violence “Although official data shows no increase in violence in Guatemala in recent years, it is still a reason some newly arrived immigrants cite for leaving.”

“Many of our Guatemalan clients are indigenous Mayans who have faced continuous systemic discrimination and oppression that they are now fleeing,” said Patricia Ortiz, a program director at the Esperanza Immigrant Rights Project at the Catholic Archdiocese of Los Angeles.

Sounds like she’s speaking of the gap between white and mestizo Guatemalans and Indian Guatemalans, which dates back to the Spanish Conquest.

They haven’t closed that gap in nigh on five hundred years, and they’re going to solve the problem by having Guatemalan Indians go the United States?

More jobs need to be created.

The Guatemalan government isn’t able to do enough to “offer the right conditions to stay,” according to Dora Alonzo Quijvik, a co-founder of the Guatemalan Parliament for Youth and Adolescence. Those conditions, she said, included providing indigenous communities access to education and protections from gangs and drug traffickers that use the country as a transit point.

This Central American migration expert blames a number of factors.

Anita Isaacs, a political science professor and Central American migration expert at Haverford College in Pennsylvania, said a persistent drought and hunger were likely contributors to the high number of Guatemalans leaving the country for the U.S. in the past year. But political unrest and concerns about the future of a U.N.-backed antigraft agency that has helped to keep crime and corruption in check play a growing role as well, she added.

During visits to Guatemala, Honduras and El Salvador, Mr. McAleenan heard about multiple efforts to improve security, add jobs and encourage more people to stay in their home countries. But there were also indications that government officials here aren’t discouraging their citizens from making the illegal and often dangerous trip north. “No-go” campaigns are ineffective, several officials told Mr. McAleenan. One official said people have a right to migrate and thanked Mr. McAleenan for the opportunities the U.S. has provided.

Well, at least he said "Thank you."

So what did Commissioner McAleenan conclude?

As he finished his trip, Mr. McAleenan said he hadn’t received the “clarion bell” for which he had anticipated. Food insecurity turned out to be one element in a complex set of reasons why so many Guatemalans have been coming to the U.S. illegally, he said. He was also frustrated that so many would-be migrants know the risks of the trip to the U.S. but chose to come anyway. “This is not an acceptable situation,” Mr. McAleenan said.