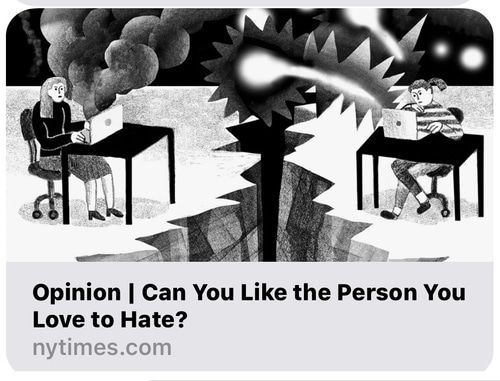 Two Jewish Women Have A Nice Day Together, The Left Freaks Out

Eve Peyser, a Socialist writer for Vice, and Bari Weiss, the liberal Editor of the New York Times opinion page recently got together and had a nice time. The two wrote about the experience in the latter’s publication: Can You Like the Person You Love to Hate? by Bari Weiss and Eve Peyser, New York Times, December 3, 2018.

Apparently, the two met at a conference, chatted, and got along. Why is it a big deal (or surprising) that two leftist Jewish women who write about politics and live in New York City met and found each other pleasant?

Strange as it might seem to readers of this website, America’s paper of record is viewed by many as a spineless center-right apologist for capitalism and bigotry. Furthermore, Weiss and her role at the NYT is viewed with particular loathing—if you are curious here is a good example of it written by a personal friend of Peyser’s (and longtime enemy of VDARE.com): If You Truly Care About Speech, You Will Invite Me to Your Office to Personally Call You a Dipshit, by Alex Pareene, Spinter News, March 8, 2018.

Peyser is one of the people who views the NYT and Weiss this way, and admits (addressing Weiss), to, “tsk-tsking various columns of yours, occasionally snarking about you on Twitter, and ascribing to the belief that The New York Times’s decision to hire you was most likely bad for America and the future of liberal democracy.”

Well, both women turned out to be human after all and got along swimmingly at whatever conference that finally put them together in the same physical room. The lesson of the essay is supposed to the generic, “social media makes us mean and myopic, we should all take a step back and strive for empathy, etc.” Aside from a throwaway line by Peyser, “We also connected over our Jewish upbringings, being women writers,” no great heft is assigned to the fact that the two have a ton in common: Jewish, Leftist, New York City-based, political writers.

The number of Americans who meet all four of those criteria is not particularly large. About 1.1 million Jews live in the Big Apple. Obviously, half of those are women, so 600,000 or so. Out of that number, how many do you figure work in political writing full time (thus excluding academics who sometimes write on politics and freelancers who have written about politics, but mostly tend bar)?

I would be blown away if the number was 1,000—it would not surprise me if the number was in the dozens. Yet, because they disagree about the extent to which the welfare state should reach, the two are supposed to be natural enemies…

Unsurprisingly, the many reactions to this piece on Twitter did not make much mention of this, with most of Peyser’s comrades on the Left-of-the-Left unironically taking to Twitter to deplore her willingness to talk to the enemy…

Jeet Heer of The New Republic was the only one to approach an inkling of understanding:

Imagine believing that the fraying of the social fabric (the consequence of growing inequality & regional disparities) can be repaired by having members of the elite be polite to each other.

Everyone else just condemned or mocked:

Can You Like the Person You Love to Hate?
Bari Weiss and Eve Peyser were Twitter enemies. Then they met. pic.twitter.com/377sDRjp3S

I read something about this once pic.twitter.com/6xM86MW3SV

pay me to have dinner with someone I hate on here then write a piece that’s just “I was correct that bitch sucks!!”

My favorite was Sarah Jones’ take:

maybe i'm a fanatic, but i've never felt much obligation to befriend anyone whose political commitments would demonstrably increase human suffering if given the force of law

Will Wilkinson, who fancies himself the “reasonable libertarian liberals like,” tried to interject:

But Jones was not having Wilkinson’s typical libertarian suspicion of assured outcomes:

i don't think it's very difficult to demonstrate that at all. i would also argue that the bonds of friendship are informed, at least in large part, by shared values

To which Jones closes with:

Is Jones suggesting Weiss takes food out of the mouths of the poor? Not sure, but I am sure that this is a hilarious example of Leftist self-cannibalism.