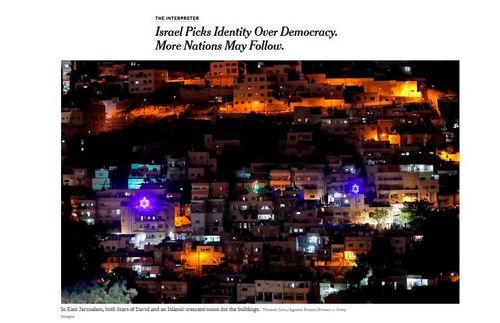 Two Definitions of "Democracy:" "Rule of Majority" vs. "Rule by the Democratic Party"

In the New York Times, Max Fisher offers a little bit more sophisticated take on Israel declaring itself to be the Jewish Nation-State after 70 years as the Jewish State. But he doesn’t appear to know what his favorite word, “democracy,” means:

… But Ben-Gurion insisted that Israel give up the territories it had conquered. If it did not, he said, occupation would distort the young state, which had been founded to protect not just the Jewish people but their ideals of democracy and pluralism. …

But to others, it is a step along Ben-Gurion’s prophesied path: from occupation to endless conflict that would corrode democracy from within, endangering a national character thought to come from ideals as well as demographics.

Above all, the law may be a choice between two visions of Israel that have come into growing tension. American diplomats have long issued a version of Ben-Gurion’s warning: If Israel did not make peace with the Palestinians, they said, it would have to choose between its dual identities as a Jewish state and democratic one.

Polls suggest that Israelis have come to agree: Growing numbers see their country as facing a choice between being Jewish first or democratic first. And for many on the political right, the choice is identity first.

Though Israel’s circumstances may be unique, its sense of facing a looming decision about its national identity is not. There is a growing backlash to the idea that countries should privilege democracy over all else. That movement, driven by perceptions of physical and demographic insecurity, insists that, now, identity will come first.

The modern era endowed countries with two rights, supposedly unassailable, that turned out to exist in tension. The right of national self-determination envisioned states as unified collectives; one nation for one people. And the right of democracy prescribed equal participation for all, including in defining the nation’s character.

In contrast, here’s the Merriam-Webster definition of democracy:

1 a : government by the people; especially : rule of the majority
b : a government in which the supreme power is vested in the people and exercised by them directly or indirectly through a system of representation usually involving periodically held free elections
2 : a political unit that has a democratic government
3 capitalized : the principles and policies of the Democratic party in the U.S.
from emancipation Republicanism to New Deal Democracy —C. M. Roberts
4 : the common people especially when constituting the source of political authority
5 : the absence of hereditary or arbitrary class distinctions or privileges

I think Fisher, like so many pundits lately, is overlooking definition #1 — “government by the people; especially : rule of the majority” for definition #3 — “capitalized : the principles and policies of the Democratic party in the U.S.”

In Fisher’s mind, democracy is whatever is good for the Democratic Party and its allied parties abroad.

What could be simpler?

Idealistic world leaders who set out those rights a century ago imagined countries that would be internally homogeneous and static. But reality has proved messier. Borders do not perfectly align with populations. People move. Identities shift or evolve. What then?

Well, in democratic Israel, the majority votes to not let non-Jews move to Israel and become citizens. Israel democratically elects leaders who builds walls to keep outsiders out.

What could be simpler?