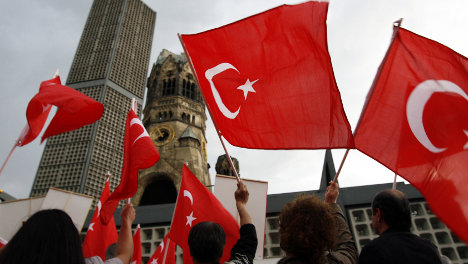 Turkish Prime Minister Erdogan likes to visit his colonists abroad often. Germany is home to three million Turks, and the homeland doesn’t want them to forget their Turkish loyalties. He is also beating the drum for Turkey being admitted to the European Union — which was an insane idea from the start, and even more so now that European leaders Merkel of Germany, Sarkozy of France and Cameron of the UK have figured out that “multiculturalism” (aka Muslim immigration) has been a colossal failure.

With that growing consensus in mind, how does opening up Europe to 73 million Turks sound? Membership in the EU means borders disappear into one big kumbaya continent.

Maybe something was lost in translation, but Erdogan exhorted his fellow tribalists to integrate but not to assimilate; he essentially wants his people to learn German in order to be financially successful, but remain Turkish at heart. It’s a familiar pattern of promoting economic assimilation only, not that different from Mexico’s ongoing propaganda effort to keep their immigrants hooked in as loyal Mexicans. Erdogan also pitched Muslim victimhood, Islamophobia, Turkish nationalism and Islamic politics.

Erdogan’s promotion of a Muslim fifth column didn’t go over well in Germany:

How well are Turks fitting in to German society? A 2009 visit from der Spiegel to a Turkish family was fascinating, in a disturbing way. The family practices gender segregation in their apartment, where men get the living room and women occupy in the kitchen. The teenaged son would prefer to live in Saudi Arabia, “where you can’t see the women” which he liked.

Erdogan Urges Turks Not to Assimilate:
‘You Are Part of Germany, But Also Part of Our Great Turkey’, Der Spiegel, 02/28/2011

Thousands of Turkish immigrants gave Prime Minister Recep Tayyip Erdogan a rock star welcome in Germany on Sunday in a show of national pride that remains fervent, even after decades spent in Germany. He told them they remain part of Turkey, and urged them to integrate into German society — but not to assimilate.

The lyric keeps echoing around the hall in Düsseldorf. “The land belongs to us all.” The sentence isn’t referring to Germany, but to Turkey.

Immigrants are waving hundreds of Turkish flags and the chanting and the music are deafening. One woman shouts “Turkey is great!” into a microphone to cheers from the crowd. Everyone in the ISS Dome, a huge sports and concert venue, is fired up, as if they’re waiting for a rock star. There’s only one show in town this Sunday, and his name is Recep Tayyip Erdogan.

The Turkish prime minister has come to Germany. He wants to meet Chancellor Angela Merkel but first he wants to speak to his “compatriots.” To people who have been living in Germany for decades, who were born here, and of whom many have German passports.

They have come from all over Germany to see him live, some 10,000 people. They say things like: “The Germans will never accept us, but we have Erdogan.” Or: “At last someone feels responsible for us, for the first time a Turkish prime minister isn’t forgetting his compatriots abroad.” One woman says: “Erdogan may get Merkel to see us as part of this society. He is our savior.”

Some 3 million people of Turkish origin live in Germany, most of them descendants of Turks invited by the government in the 1950s and 1960s as “guest workers” to make up for a shortage of manpower after World War II.

Muslim immigrants have been the focus of a heated public debate in Germany over the last year, with conservative commentators and politicians accusing them of failing to integrate into German society. Many immigrants in turn complain that they are still being called “foreigners” even if they were born in Germany, have German citizenship and speak the language perfectly.

‘I Am Here to Show That You’re Not Alone!’
The savior arrives almost an hour and a half late. “Turkey is proud of you,” the crowd chants in this city in the heart of the Rhineland. “We are proud of you,” Erdogan replies.

He starts out by appealing straight to people’s hearts: “I am here to feel your yearning with you, I am here to enquire about your welfare. I am here to show that you’re not alone!”

Erdogan wants to give his audience a clear identity. “They call you guest workers, foreigners, or German Turks. It doesn’t matter what they all call you: You are my fellow citizens, you are my people, you are my friends, you are my brothers and sisters!”

“You are part of Germany, but you are also part our great Turkey,” says Erdogan.

It sounds like a domestic campaign speech ahead of elections in Turkey this summer. Erdogan is wooing for votes among Germany’s Turkish population. In previous elections, immigrants with Turkish passports flew to Ankara, Istanbul or Antalya just to cast their ballots at the airport.

That is why Erdogan keeps highlighting the successes of his government in his speech, and paints a picture of Turkey as a modern, major power. “We’re not a country that draws on help, we provide help too,” he says. And: “Now my compatriots are no longer traveling in buses, they go by plane.” There are martial-sounding tones too: “Now Turkey will at last start building its own war planes.”

‘No One Has the Right to Deprive us of Our Culture’
Erdogan portrays himself as a supporter of democracy and freedom of opinion. Turkey is changing, he says, adding that all artists and writers who left Turkey and went into exile should return. The message is that the European Union should let Turkey join.

In a newspaper interview published ahead of his speech, Erdogan urged Merkel to drop her opposition to Turkey’s accession to the EU. “Never have such political obstacles been put in the path of an accession country,” he said.

Human rights, innovation, progress — the rural way of life that many Turks now living in Germany left behind them in the 1960s, no longer exists, Erdogan told the crowd. “We mustn’t cling to it anymore. I want you to learn German, that your children learn German, they must study, do their masters degrees. I want you to become doctors, professors and politicians in Germany,” says Erdogan.

And then he repeats the sentence that caused such a stir at a speech he held in Cologne three years ago. He warns Turks against assimilating themselves. “Yes, integrate yourselves into German society but don’t assimilate yourselves. No one has the right to deprive us of our culture and our identity.”

Erdogan knows that this statement amounts to a provocation in Germany — no politician here is demanding that Turkish immigrants should deny their roots or give up their culture. Erdogan adds: “German newspapers will pick up on this tomorrow, but that’s a mistake.”

His message to devout Muslims is similar. “Islamophobia should be seen in the same way as anti-Semitism,” he says.

And he has brought along a gift for his compatriots — a kind of light-weight dual citizenship. The so-called “Blue Card,” which gives Turks with German citizenship certain rights in Turkey, is to be upgraded. Holders of the card will, in the future, have the same rights as Turkish citizens in dealings with authorities and banks.

For minutes, confetti in the red and white Turkish national colors rains onto the stage. Erdogan’s speech is over.

It was a call for more integration but with strict conditions attached. Adapt yourselves a bit, don’t allow yourselves to be treated badly and if there’s a problem, I’ll come and help! It was a speech that did nothing to reinforce any feeling of belonging to Germany — Erdogan steadfastly appealed to the Turkish national pride of people who have been at home in Germany for four generations.

One woman stood outside the hall with tears streaming down her face. “I don’t need to go on a summer vacation this year. In my heart, I’ve just spent hours in Anatolia.”