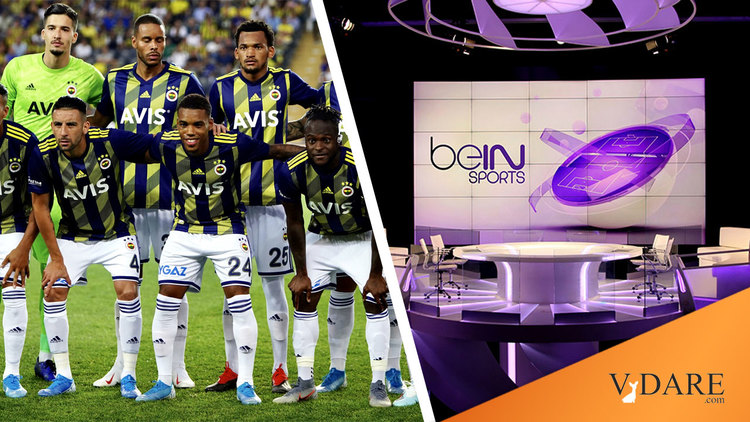 As we all know in the United States, conspiracies couldn’t possibly happen because of Reasons, so anybody accused of being a conspiracy theorist must be low class (unless you are black, such as Ta-Nehisi Coates, whose conspiracy theory about why his having been beaten up so much by the other black boys was actually the fault of “those who think they are white” made him a MacArthur Genius).

But as everybody knows in Turkey, the more complicated the conspiracy theory you concoct, the smarter you are. Thus from the New York Times news section:

A feud between a top Turkish soccer team and the league’s broadcaster is rooted in taped chants, time stamps and club rivalry. But the fight’s cost could be enormous.

The offending chant had been broadcast during Turkish league matches for months before anyone noticed it. The refrain, a variation of which is often heard in stadiums around Turkey, ends with a profanity directed at Fenerbahce, one of the country’s biggest and richest clubs.

For months, it had been included in the prerecorded crowd noise that has become the soundtrack to live sports in empty stadiums in the coronavirus era. And for months, no one in Turkey said a thing — until January, when a keen-eared observer noticed the chant in the background of games involving one of the league’s smallest teams.

Now, it is the latest flash point in an increasingly bitter dispute pitting Fenerbahce — a Turkish soccer team which has millions of passionate fans and is led by one of Turkey’s richest men — against beIN Media Group, one of the world’s largest buyers of sports rights.

Fenerbahce has seized on the revelation about the chants as proof of its long-held belief that the Qatar-based broadcaster, through its beIN Sports Turkey subsidiary, had an agenda against the club. The fight has sabotaged interviews and played out in on-field protests, perceived injustices and, most recently, a lawsuit in a Turkish court. It could have serious financial consequences for the entire league, and the club is showing no sign it will relent. …

“Conspiracy and paranoia is part of the culture in Turkey,” said Emre Sarigul, a co-founder of Turkish Football, the largest English website solely devoted to Turkish soccer.

The Turkish motto ought to be, “Those who conspire first, laugh last.”

… Fenerbahce’s response was laced with the language of conspiracy theory. “If our arguments are considered individually, they would not make much sense,” said Kizilhan, the general secretary, “but seeing them as the parts of a puzzle, it shows the big picture clearly.”

Kizilhan acknowledged that some of the nuances of the fight would be difficult to understand for anyone “without having clear understanding and knowledge of local intricacies and ingredients of Turkish football.”

So I’m not going to recount any of the details.

Turkey, with its non-Indo-European language, may seem alien to the West, but it interacts with Western thinking. For example, I picked up the concept of the “Deep State” about a dozen years ago, which had originated in Turkish leftist critiques of the ruling Kemalist apparatus. It implies, among much else, that even people who are seemingly retired from government office maintain a web that is hard for outsiders to overcome.

When I was in Turkey in 2009, I ran into a personal problem and asked the hotel management for advice in finding out what I needed to know about somebody’s movements within Turkey. They sent me their hotel detective, a grizzled older man, with fervent assurances that he had been in “Security,” and that he had a son and daughter who currently work in “Security.” He almost immediately found the information I needed. Since he didn’t speak English, I couldn’t ask him how he did it after everybody else I had asked had failed. So I asked the hotel manager how the man from Security had done it: “Government computers,” he replied.

One important difference between the kind of conspiracy theorizing that grew out of the Fertile Crescent versus today’s conspiracy theorizing rampant in sub-Saharan Africa (and increasingly in America) is over intentionality. In the temperate world, witchcraft is assumed to depend upon malign actions, such as making the Evil Eye. But as anthropologist Henry Harpending discovered during his years of research in Africa, in Sub-Saharan Africa, however, witchcraft is assumed to depend merely upon unfortunate thoughts, which can project malign forces across great distances, even if you resist acting upon those thoughts. In other words, African theories of witchcraft resemble African-American academic theories of implicit and systemic racism in which malign forces are propagated by bad thoughts across vast distances of time and space without any specific mechanism needing to be identified.