Tucker Carlson: The Left Wants America To Be Less White

The obsession of elites over Race and Racism to the exclusion of almost everything else now is really remarkable. The alleged victimhood of certain tribes is a top narrative every day in the news. The group to blame, the media now asserts, is white people.

The United States was founded and designed by white Protestant men, yet millions of diverse foreigners around the world want to immigrate here. So the narrative is false, but the noise distracts from what the Democrat government is up to—gaining more power.

Tucker Carlson recently discussed the left’s “whiteness” racism and the behavior it requires. Guest JD Vance further observed that “we’re constantly divided against each other, because that’s the way our leaders want it.” 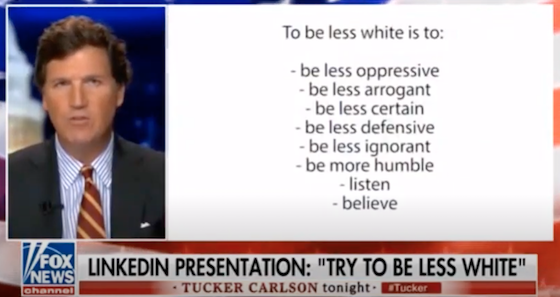 A spare video is here.

TUCKER CARLSON: So you’re not really allowed to notice what’s happening in Seattle or any of our big cities which are collapsing, and people like Robin DiAngelo are charged with making you not notice.

According to Robin DiAngelo, America’s biggest problem has nothing to do with economics. It’s not crime or unemployment. It’s not the mismanagement of the people in charge. The problem with Americans is their DNA.

Now, a sane society would reject that for what it is, open racism, but Robin DiAngelo has gotten richer and more famous. She’s all over television saying the same thing. Your skin color determines whether or not you’re a good person.

(BEGIN VIDEO CLIP)
“WHITE FRAGILITY” AUTHOR ROBIN DIANGELO: I’ll never forget asking a group, okay, so what if you could just give us feedback on our inevitable and often unaware racist assumptions and behaviors and I’ll never forget this black man raising his hand and saying it would be revolutionary.  And you know, just like — just take that in. I just want all the white people to just take that in.

Revolutionary that we would receive the feedback with grace, reflect and seek to change our behavior.  That’s how difficult we are. That’s how big a-holes we are.

CARLSON: Poor Jimmy Fallon. He just wanted to sing songs and do his little comedy thing and yet, he got caught up in this horrible moment and he is going along with it. It is a hostage tape every night.

That was last year, by the way, Robin DiAngelo has not gone away. Now, she is delivering video lectures as part of something called “The LinkedIn Learning Series.” And if LinkedIn is behind it, it’s everywhere.

Several major corporations direct employees to the learning platform, which is owned by Microsoft. In wonderful lunatic presentations, DiAngelo notes that quote, “To be less white is to be less oppressive, less arrogant, less defensive, and more humble.” You’re seeing that slide on your screen.

The presentation goes on to urge employees to quote, “Try to be less white.” Again, many corporations are using LinkedIn for training including Coca-Cola, which is run, you won’t be surprised to know, by a white guy.

J.D. Vance is the author of “Hillbilly Elegy.” He joins us tonight. J.D., I have to wonder what effect this kind of stuff is having on our society.

And what these people are doing by constantly forcing us to focus on the color of our skin is they are destroying an essential part of American heritage that we can judge people based on the content of their character.

They’re doing it, I think, for cynical reasons, but at the end of the day, they’re going to destroy something that’s critical and important and good about this country and we should fight back against it.

CARLSON: I wonder how you can you live in — I mean, we have, cynicism aside, a truly diverse country. There is no majority religion, even barely ethnicity at this point. That’s — I don’t think anyone’s mad about that. But how do you have a country like that if you’re taught by your leaders to hate each other because of your differences? Like how does that work long term?

VANCE: Well, at the end of the day, it doesn’t work, Tucker. And I think one of the big things that’s happening in our country right now is that we’re constantly divided against each other, because that’s the way our leaders want it.

And it’s important to ask what’s going on? Why is this happening? And if you look behind identity politics, it’s almost always about power.

CARLSON: That’s right. This can’t be legal. It’s happening everywhere. At some point, people are going to start to file class action suits, and we’ll support them when they do.

In the meantime, J.D. Vance, great to see you. Thank you so much.