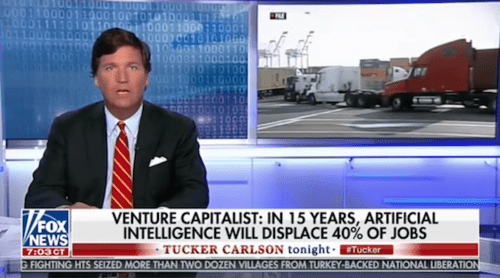 On Thursday’s show, Tucker Carlson connected the very important dots between automation-fueled job loss and immigration. He had seen the preview of the upcoming Sixty Minutes segment titled, Venture capitalist: AI will displace 40 percent of world’s jobs in as soon as 15 years.

Here’s a teaser video from Sixty Minutes (1:38 minutes in length) which is a bit longer than the two sentences Tucker presented:

Clearly the headline got attention in the Carlson office, since 15 years is a tangible time frame, and 40 percent of the world’s workforce unemployed means a social earthquake we cannot begin to imagine.

Regarding recent events, it’s simply crazy for America to continue admitting low-skilled uneducated foreigners from Central America who claim asylum at the border and then disappear after being released. There’s no place in the modern American workplace for non-English-speaking rural people with sixth-grade educations because the world has changed. Even as ultra-cheap labor, Hondurans et al will become unemployable when smart machines become cheaper than workers.

Machines and AI are about to change the world fundamentally, yet Washington remains on snooze mode, still stuck on importing cheap labor when that whole endeavor is about to be made history by advances in technology. Remember:

Tucker begins with a slam of clueless reporter Jim Acosta, and the material about AI starts at around three minutes in:

TUCKER CARLSON [2:55]: There was one fascinating and highly relevant story about immigration this week and it didn’t even mention borders or walls: it’s from an upcoming edition of Sixty Minutes on CBS. in the piece a researcher called Kai Fu Lee describes what’s about to happen to this country’s labor market thanks to the growth of artificial intelligence. Watch this:

KAI FU LEE: AI will increasingly replace repetitive jobs, not just for blue-collar work, but a lot of white-collar work. A lot of things will become automated — we’ll have automated stores, automated restaurants and altogether in 15 years that’s going to displace about 40% of jobs in the world.

CARLSON: Forty percent of the world’s jobs, approaching half. As Lee warns in the segment, all jobs are at risk — high-end, attorneys, for example, but it’s the remaining low-skilled jobs that are most likely to disappear — professional driving for example, taxis, trucks, delivery vehicles. Five million Americans now do that for a living and support their families on those wages: self-driving cars could put them all out of work very soon.

And not just them — store clerks, waiters, cooks — they’re in imminent danger too. Just about any repetitive job is at risk of going away.

Automation is accelerating. This is real. It’s going to have a nearly unimaginable effect on what Americans do for a living, and on American society itself. Our country’s low-skilled workers already live in a pretty precarious spot. Their wages and their benefits have stagnated for decades. In fact, millions of them aren’t really workers at all but, instead, get by on disability payments or other government programs.

Some don’t even survive. They’re overdosing and committing suicide at steadily higher rates, as you know. But in the next few years, if anything, things will get even worse. Some of the last remaining options for these workers are going to vanish, and there’s nothing obviously waiting to replace those jobs. This is happening.

So, what is Washington doing about it? Well, nothing, but not just nothing, worse than that. Our policymakers are exacerbating the problem, making it far more painful and harder to solve. At the very moment that millions of American jobs are about to vanish, their top priority, literally, the top priority here, is importing millions of new low-skilled workers. Both parties want that. It’s insanity.

Now, to be clear, as we’ve been before, we are not attacking illegal immigrants. They’re doing exactly what we would do if we lived in Honduras. We’d try to come here. That’s understandable. What is baffling, what is impossible to understand, is that our policymakers haven’t thought any of this through, and they don’t care to.

Questions like what are all these people going to do for a living 10 years from now, when the jobs they expect to fill are gone. And, most pressingly, what about our own people? How does this help them, as they stare down the barrel of economic irrelevance in the digital age?

Thanks to technology, their labor, middle-class labor is worth less than it ever has been. And as a result of that, our middle class has less power and less economic security. Mass immigration makes them even weaker. It’s simple economics, supply and demand.

The one thing they do have, and here’s what Washington should pay close attention, is the vote. This is still a democracy. And if our policymakers keep pushing Americans with lunatic economic policies like this, you’re going to start to see voters vote for some very radical candidates, very radical, and that’s guaranteed. This is exactly how revolutions start. Wise leaders would already know that.