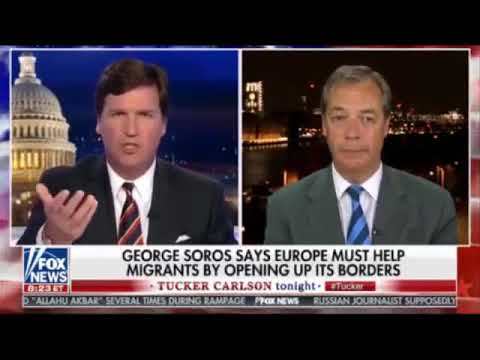 There’s not enough psychological analysis applied to politics and the world situation, but on Wednesday Tucker Carlson and Nigel Farage tried to sort through some larger issues about national sanity. One topic was why does Europe seem bent on suicide — something noticed by many, including Douglas Murray who wrote The Strange Death of Europe. Some of the national elites appear to be affected with an odd insanity, like German Chancellor Angela Merkel who apparently wanted to expunge her nation’s Nazi guilt by inviting the Muslim world.

Many of Europe’s new residents behave like invaders rather than immigrants. 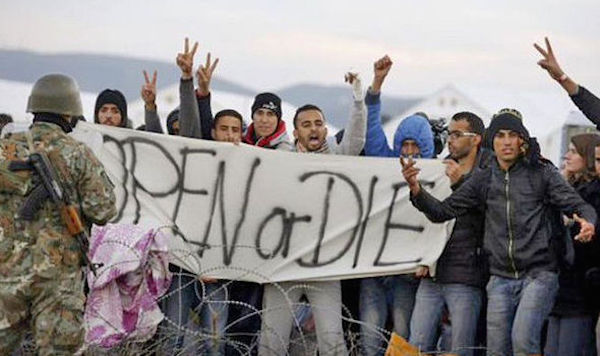 Meanwhile, regular Europeans aren’t much interested in collective guilt, which explains the recent populist revolt to a degree.

TUCKER CARLSON: Nigel Farage once led the UK Independence Party and he joins us now. Nigel thanks for coming on, I wanted to ask you about this because you have an international perspective and I don’t think these trends are just American. I think these impulses are also shared by a lot of the people in charge of the world the West and one of the driving impulses seems to be masochism or the desire to destroy our civilization, even suicidal in some cases, but the idea that you’re not allowed to defend yourself seems to undergird a lot of what we’re seeing. Have you noticed this?

NIGEL FARAGE: Yes, not just yourself but in fact the whole shape of society. George Soros’ Open Society Foundation which he has poured billions of dollars into — this is the biggest political campaigning organization in the world. He wants to break down the fundamental values of our society, and in the case of Europe, he doesn’t want Europe to be based on Christianity.

All of this — whether it’s Soros or some of those very strange people in California — all of it is based on some kind of self-loathing, some sort of guilt trip about the past and in Soros’ case, it’s a guilt trip of course about Germany’s wartime actions, the way a Jews were treated. In America, in many cases it’s how the native Indians were treated. It’s all based on guilt, but it’s not based on reality, I have to say. In the case of Soros, the bosses in Brussels will be furious with his timing right now; we have Italy in revolt because the new government or the attempted new government wants to get rid of half a million illegal migrants, and Soros appears to be going ever so slightly mad.

CARLSON: Right, look I would say that there are a lot of sins that we collectively have committed as a society, as a civilization obviously, but I wonder can we continue if those sins so shake our faith in ourselves that we refuse to defend ourselves. I mean the church in Oakland that we described in the intro is encouraging its members not to call police even when they feel they need the police. I mean if that’s not a suicidal impulse, what is it?

FARAGE: No I mean look, you know there are many European cities now where the total failure of our political class to defend our Judeo-Christian culture, which actually underpins our whole society, is in many ways what’s open the doors to Islamic extremism, so we are engaged in some very very dangerous policies here. The good news though is that voters are rebelling — BREXIT, Trump, the recent Italian elections, the victory of Viktor Orban in Hungary — whatever these people say, ordinary people, real people — you know those that pay their taxes, obey the law and go to work — they want none of this.

Farage is a smart guy, but I disagree with him about Soros being motivated by guilt — it isn’t that simple. Why would Soros be investing $1.5 million into California District Attorney races if guilt were his political motivation? He is dropping big cash to defeat law enforcers and install prosecutors who will liberalize drug policies and criminal penalties — as if California doesn’t have enough crime already.

Soros has bigger fish to fry than mitigating European guilt; one interest appears to be creating a different sort of governance for the planet. He openly admits to preferring globalism over the nation state.

Anyway, Soros is a dangerous influence on the world’s politics when sane leadership is in short supply.