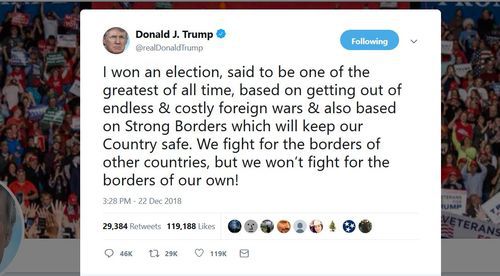 But Dana Milbank in the Washington Post schools Trump:

Perhaps the timing of George H.W. Bush’s death last month was merciful. This way he didn’t have to see America lose the Cold War.

Bush presided over the Soviet Union’s collapse in 1991. But the triumph he and others earned with American blood and treasure over 71 years, defeating the Soviet Union and keeping its successor in check, has been squandered by President Trump in just two.

Trump’s unraveling of the post-war order accelerated this week when he announced a willy-nilly pullout from Syria, leaving in the lurch scores of allies who participated in the campaign against the Islamic State, throwing our Kurdish partners to the wolves, isolating Israel, and giving Russia and Iran free rein in the Middle East. Then word emerged that Trump is ordering another hasty withdrawal, from Afghanistan. Trump’s defense secretary, retired Gen. Jim Mattis, resigned in protest of the president’s estrangement of allies and emboldening of Russia and China.

The TV series “The Man in the High Castle” imagines a world in which Nazis won World War II. But we don’t need an alternative-history show to imagine a Soviet victory in the Cold War. We have Trump.

Mattis, in his memorable resignation letter (a bookend to George Kennan’s “long telegram” of 1946) wrote: …

Generations of Americans paid any price and bore any burden, from Berlin to Saigon to Havana. Now, 29 years after the wall fell, Trump is handing Moscow the Cold War victory it could never win.

It’s the Zeroth Article of the Constitution: