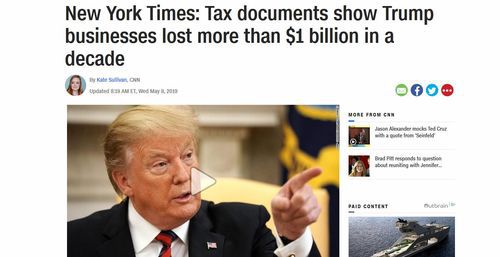 One of the more telling obsessions of the last four years has been the Democrats’ conviction that if they could just get their hands on even more of Trump’s old tax returns they could prove this reclusive, mysterious figure is NOT A REAL BILLIONAIRE.

Hillary, in-between bringing up Alicia Machado and the dispute between the clubhouse architect and the owner at the Trump Westchester country club where Hillary is a member, was always asking “Is he even a real billionaire?” At Hillary’s “basket of deplorables” speech to gay Wall Street donors, the musical highlight was Barbra Streisand singing a parody adaptation of “Send In The Clowns,” in which she began:

IS HE THAT RICH?
MAYBE HE’S POOR?
’TIL HE REVEALS HIS RETURNS
WHO CAN BE SURE?
WHO NEEDS THIS CLOWN?

One assumption behind the Democrats’ was that nobody is aware that Trump ran into financial trouble in the 1980s. But at the time, the hope that we’ll never have to hear again from this blowhard was wildly popular. For example, some David Letterman Top Ten Lists from 1990-1991:

Top 10 Signs that Trump Is in Trouble

9. Trump Shuttle now used to haul lumber.
8. Attracting a lower class of bimbo.
7. Recently asked advisors how they thought a “Battling Billionaire”
character would go over on the pro wrestling circuit.
6. Has been sucking up to Merv [Griffin]
5. This morning, he had himself evicted. …
3. Now does tacky embarrassing things on a much smaller scale.
2. Just got a paper route.
1. He now takes my calls.

10. Might have to borrow money from Merv.
9. Fear that if he sells Taj Mahal, new owner will turn it into a
tacky ostentatious eyesore. …
5. Other guys in the shelter snore.
4. Drunk houseboy Ernesto blasting car stereo while lifting weights
in garage at 2 a.m.

Top 10 Reasons for the Trump-Maples Break Up

9. Banks forced him to sell Marla as part of debt restructuring.
8. Shy, reclusive Trump feared marrying an ex-model might attract
attention.
7. Caught him stealing tips off other tables at restaurants. …
5. Philosophical differences about Dead Sea Scrolls. …
3. He found out she was lying when she said her father invented maple syrup.