Since winning the Republican nomination, Trump’s most discussed action was not a VP pick or appealing to his previous enemies, but a tweet celebrating Cinco de Mayo: 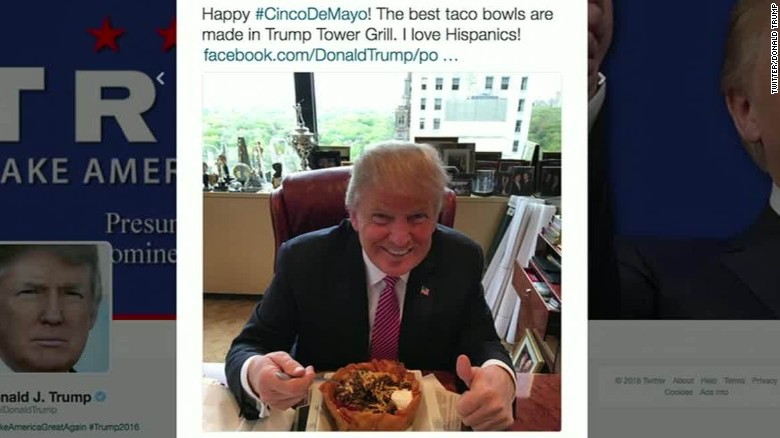 Over 80,000 users have retweeted his post, three times more than any other of his other tweets.  Beyond the usual unfunny leftist snark—some variation of Hitler eating a bagel— many took this tweet very seriously.  The New York Times faithfully asked La Raza for their opinion:

“We’re going back to the day when politicians thought all they had to do was eat a taco or wear a sombrero to win our vote,” said Janet Murguía, president of NCLR (also known as the National Council of La Raza), the nation’s largest Latino organization. “Really? This is 2016 and those days are long gone.”…. Ms. Murguía also said that Mr. Trump had missed the mark on his Cinco de Mayo  menu choice. “I don’t know that any self-respecting Latino would even acknowledge that a taco bowl is part of our culture.”  [Donald Trump’s ‘Taco Bowl’ Message: ‘I Love Hispanics’, by Ashley Parker, May 5, 2016]

Beyond the “It’s the Current Year” cliché, it’s particularly rich that Trump’s opponents are upset with him praising Tacos.  After all, ethnic food is usually the only benefit most immigration boosters can credit to diversity, though apparently the term “ethnic food” is now offensive.  See, e.g.

And in fact, many open borders enthusiasts justified amnesty because of 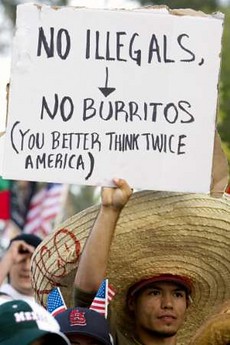 In 2006, a pro-amnesty protester in a  Sombrero held a sign, stating “no illegals, no burritos”.

More recently, protesters held a sign stating “Roses are red, tacos are enjoyable, don't blame a Mexican because you're unemployable."  Luke Russert and cuckservative Eric Erickson both found this amusing enough to tweet.

"Roses are red, tacos are enjoyable, don't blame a Mexican because you're unemployable." #SCOTUS pic.twitter.com/zqWhRyqOpW

So please make up your mind: must we have massive Hispanic immigration for tacos, or is it racist to credit Hispanics for it?