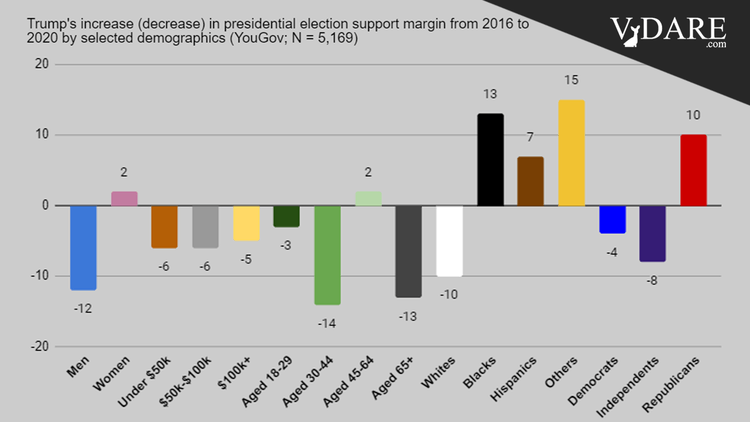 The following graph shows the change in Donald Trump’s advantage or disadvantage against his Democrat opponent by various demographics from 2016 to 2020. In 2016, Hillary Clinton had a one-point edge among those aged 45–64. In 2020, Trump has a one-point lead over Joe Biden among that age group. The change is thus represented in the graph as +2: It should be noted these polls weren’t taken at the exact same point in the election cycle. YouGov switched to the current cross-tab format for its last round of polling in early November of 2016 but not before then. The 2020 poll employed here is from the beginning of October 2020, a month earlier in the cycle than the 2016 poll.

These results are striking. They show Trump improving by a net of 11 points among non-whites but declining by a net of 10 points among whites from 2016 to 2020. Because whites still comprise nearly three-quarters of the voting electorate, this is not a wash for the president. It represents an apparent decline in total support, albeit arrived at in exactly the opposite way the major media Narrative would have us believe. Trump is not doubling down on white men at the expense of everyone else. To the contrary, he’s making inroads with everyone else as he concedes support among white men.

The sex shift is probably at least partly attributable to his having run against Hillary last time and Biden this time.

But the racial dynamic isn’t as easily accounted for. I suspect there is a Boy-Who-Cried-Wolf aspect to this. In the lead up to 2016, people were screaming about how Trump was going to put black people in chains, deport brown people on cattle cars, and throw gays in concentration camps. When none of these things happened, hysteria gave way to something more like moderate disapproval or even begrudging respect.

As for conjecture on the white shift, some must be laid at the feet of the president. He promised a wall, a renaissance in American manufacturing, and an end to foreign wars—and all we got were these lousy tax cuts.

Another aspect, though, is one we’ve emphasized repeatedly here. The reason we keep bringing it up is because it’s a part of the story that has gone largely unremarked upon in coverage and analysis of the election, even among dissidents. That is just how much better a candidate Biden is than Clinton was.

In 2016, when it was one-v-one, Clinton beat Sanders 55%–45%. When it was one-v-one in 2020—after four years of the Vermont senator’s star rising—Biden beat Sanders 65%–35%. While Clinton had to claw and scrape to triumph over Sanders in the Democrat primaries, Biden blew him out of the water once the other boats had docked. And Biden managed to do so while still maintaining a greater appeal to independents than Clinton could manage.

Beyond the big question marks over how mail-in voting, Covid, and civil unrest will influence things, Trump’s one unambiguous improvement from 2016 is found among traditional Republicans. Many 2016 Never Trumpers have since climbed aboard the Trump train. The rock-ribbed conservatives who defended Ted Cruz’s shanking Trump at the Republican National Convention four years ago are now the president’s most ardent supporters. Are they enough to make up for the politically disaffected whites who took a chance on the outsider in 2016 but won’t be reupping this time around?