It’s a constant source of amazement that many of the world’s people regard the United States as a deluxe welfare office, jobs referral service and free school for residents of the entire planet, and the only requirement is getting here past the dismal border defenses.

The entitled invaders never consider that they could have their own nation of law and order at home if they did they hard work of reforming what’s broken.

Instead it’s just easier to mooch off America, like the characters in the newspaper article below planned to do.

Naturally, the gang members often tag along through the squishy border because they like the free stuff too. The Obama administration was particularly helpful in welcoming foreign criminals, even though crime is a job (some) Americans will do. 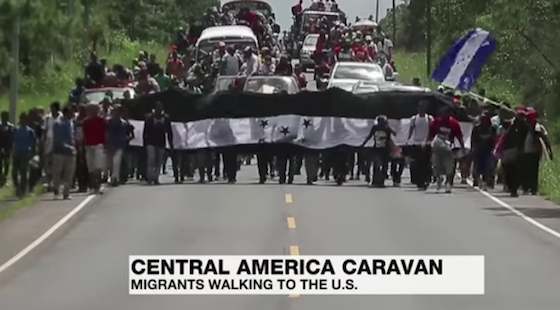 As a result, America has been plagued with increased crime diversity from Central America, a reminder of which occurred a couple weeks ago when authorities arrested 96 members of the MS-13 gang.

So the permissive-immigration-as-rescue project has a fundamental problem — the people trying to escape crime often bring it with them.

Meanwhile, according to the press, America should rescue more of the billions on earth who would benefit from relocation.

Instead, an American judge swiftly denied their asylum requests. The Trump administration, in making asylum an increasingly remote possibility for everyone, had closed the door on them.

In early August, immigration officials escorted the couple onto a chartered airliner packed with deportees that flew them back to this industrial city in one of the world’s most dangerous countries.

They were home, back in a two-room apartment in the dusty San Pedro Sula neighborhood of Rivera Hernandez.

There was nowhere more frightening.

“They own Rivera Hernandez. The gangs own it,” said the wife, a driven, barely educated daughter of farmworkers who had promised herself as a little girl that she would escape the drudgery of itinerant field work. She, like most migrants living underground in Honduras, spoke on condition that her and her husband’s names not be used, fearing retribution by gangs. “They own the whole place. They walk around freely.” (Continues)

The couple lives in a dangerous country—and why exactly should this be America’s problem when we have plenty of crime already?