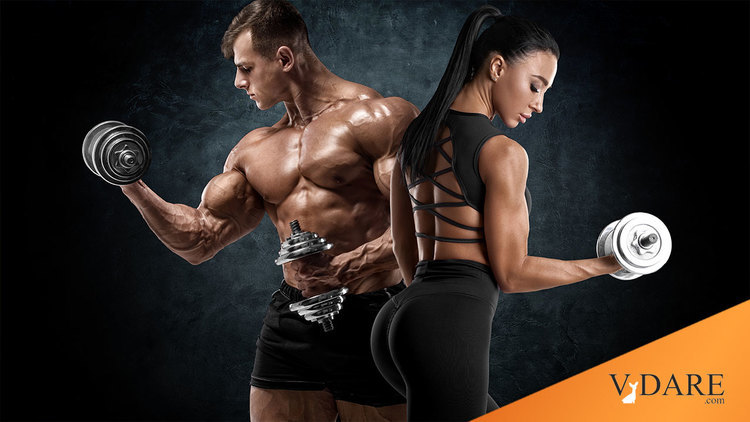 "Track and Battlefield:" Sailer and Seiler on Women in Combat from 1997

It was widely believed in the 1990s that women athletes were "closing the gap" with men athletes. (Look how fast Flo-Jo is!) In turn, this assumption of equalizing athletic performance was used to justify sending women into combat: obviously, prejudices about women warriors not being able to carry their fair share of their platoon's equipment were outdated.

So, the 12/31/1997 article "Track and Battlefield" in National Review by sports physiologist Stephen Seiler and myself was kind of a bombshell. We demonstrated that, contrary to nearly universal assumptions, the performance gap between male and female runners in the Olympics was widening.  This was because the Fall of the Berlin Wall exposed the East German doping program and the Ben Johnson scandal at the 1988 Olympics slowed Western cheaters. In other words, the narrowing of the gap after 1976 had been largely due to women runners taking artificial male hormones. (This was published, by the way, the year before the McGwire-Sosa home run fiasco.)

Here's the last section of our article:

In conclusion, studying sports' gender gaps offers new perspectives on a host of contemporary issues seemingly far removed from athletics, such as women in the military. Ironically, feminists in sports have successfully campaigned for the funding of thousands of sexually segregated, female-only teams, while feminists in the media and Congress have compelled the Armed Forces (outside of the defiant Marines) to sexually integrate basic training and many operating units, even including some combat teams.

Who's right? Female college coaches have some powerful reasons for believing that coed competition would badly damage their mission of turning girls into strong, take-charge women. For example, they fear that female athletes would inevitably be sexually harassed. Even more distracting to their mission than the unwanted sexual advances from male teammates, however, would be the wanted ones. This opinion is based on more than just lesbian jealousy: research on single sex vs. coed schools shows that teenage girls are more likely to develop into leaders in all-female groups, whereas in coed settings young females tend to compete with each other in coyly deferring to good-looking guys. Any hard-headed female basketball coach could tell you that merging her team with the school's men's team would simply turn two dedicated squads now focused on beating their respective opponents into one all-consuming soap opera of lust, betrayal, jealousy, and revenge. (Does this remind you of the current state of any superpower's military?) Yet, feminists utterly forget to apply their own hard-earned wisdom to the armed forces: on the whole, deploying young women in cramped quarters alongside young fighting men does not make the women into better warriors, it make them into moms. For example, the Washington Times reports that for every year a coed warship is at sea, the Navy has to airlift out 16% of the female sailors as their pregnancies become advanced.

Reorganizing the military along the lines of the sexually segregated teams characteristic of contemporary college sports will do much both to more fully use the potential of women in uniform and to quell the endless sexual brouhahas currently bedeviling our coed military. Yet, the crucial issue remains: Should women fight? The main justification feminists give for a coed-izing the military is that lack of combat experience unfairly hampers female officers' chances for promotion.

We can again turn for guidance to female coaches. The main reason they favor sexual apartheid on the playing fields is that in open competition males would slaughter females. It seems reasonable to conclude the same would happen on the battlefields. This may sound alarmist. After all, running's gender gap is a rather marginal-sounding 1/8th; surely, many women are faster than the average man, and, by the same logic, many would make better soldiers.

First, though, as economists have long pointed out, competition occurs at the margins: runners don't race against the average Joe, but against other runners. And soldiers fight other soldiers. Second, while the moderate width of track's gender gap is representative of many simple sports that test primarily a single physical skill (the main exceptions are tests of upper body strength like shotputting, where the top men are as much as twice as strong as the top women), in free-flowing multidimensional sports like basketball where many skills must be combined, overall gender gaps tend to be so imposing that after puberty females almost never compete with males. Consider what traits help just in enabling you to dunk a basketball: height, vertical leaping ability, footspeed (to generate horizontal momentum that can be diverted into vertical liftoff), and hand size and hand strength (to dunk one-handed). Not one of these five individual gender gaps is enormous, but they combine to create a huge difference in results: almost everybody in the NBA can dunk compared to almost nobody in the WNBA. Basketball, however, is far more than slam and jam. Throw in the need for massiveness and upper body strength in rebounding and defense, wrist strength in jumpshooting, etc., and multiply all these male advantages together, and the resulting gender gap in basketball ability is so vast that despite the WNBA's state of the art marketing, it's actual product resembles an all white high school boys' game from a few decades ago.

Strange as it seems today, back in 1997 the media acted as if the WNBA was cool.

Although the unique ease of our Gulf War victory encouraged the fantasy that technology has made fighting almost effortless, the chaos of combat will continue to demand a wide diversity of both physical aptitudes (like being able to hump a load of depleted-uranium ammunition) and mental attitudes (like the urge to kill) that interact to create a huge gender gap in fighting ability.

While in theory it might be nice if we could accommodate ambitious female officers' need for combat experience by negotiating during wars with our enemies to set up separate all-female battles between our Amazon units and their Amazon units, this is where the analogy with sports finally breaks down: opponents in war don't have to play by the rules ... causing our women to be defeated, captured, raped, and killed. Still, if (as, in effect, so many feminists insist) female officers' right to equal promotion opportunities requires that they be furnished with female cannon fodder, there is one proven formula for narrowing the gender gap to give our enlisted women more of a fighting chance. Feminist logic implies that just as our military once imported ex-Nazi German rocket scientists, it should now import ex-Communist German steroid pushers.