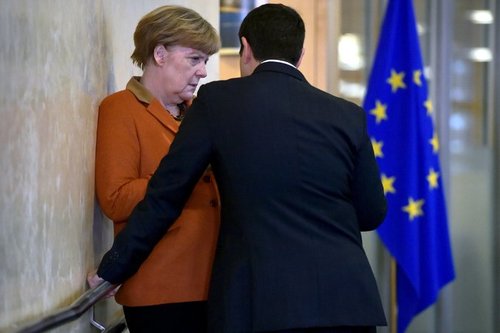 To Understand Brussels Deadlock, You Need To Know WHO Is Trying To Destroy Europe

BRUSSELS — Chancellor Angela Merkel of Germany met here on Sunday with leaders of East European countries along the main migrant trail to affluent parts of Europe in a new push to bring some order to a chaotic flow of tens of thousands of people seeking shelter from war or simply better lives.

The gathering, called at Ms. Merkel’s behest by the European Union’s top executive, Jean-Claude Juncker, was the fifth consecutive meeting of leaders focused on so far fruitless efforts to deal with Europe’s biggest refugee crisis since the end of World War II.

Voicing despair at Europe’s failure to forge a common policy, Miro Cerar, the prime minister of Slovenia, which has been swamped by 60,000 people from Syria and elsewhere over the past 10 days, said that continued failure to act in concert would signal “the beginning of the end of the European Union and Europe as such.” Europe, he said, “will begin falling apart.”

The European Commission, the union’s executive arm, has proposed a raft of plans and programs since the early summer to deal with the migrant crisis but a wide chasm has opened up between talk in Brussels and real action on the ground. …

Warning that the flow of refugees will only increase as a result of intensified fighting in Syria, Johannes Hahn, the European Union’s senior official for regional policy, pleaded Sunday for a “coordinated and coherent answer” and said that attempts by individual nations to stop the flow would only turn other countries into “parking lots” for stranded migrants. “Don’t look for individual solutions. This is not a way out,” he said.

Mr. Hahn’s comments signaled growing alarm in Brussels over efforts by some countries in Eastern European, notably Hungary, to keep asylum seekers out. A fence built by Hungary along its southern border to prevent migrants and refugees flowing through its territory has pushed the flow toward Croatia and Slovenia.

Viktor Orban, Hungary’s pugnacious prime minister, sounded a characteristically defiant tone upon his arrival Sunday in Brussels, saying that he was attending as only an “observer” as Hungary is no longer part of the migrant trail. Mr. Orban repeated his longstanding position that the only realistic way to solve the crisis is for the European Union to take over control of Greece’s eastern border with Turkey, the main corridor for migrants and refugees seeking entry to Europe.

“We should go down south to protect the borders of Greece,” Mr. Orban said, complaining that he had proposed this many times “but no one accepted.”

The repetitious failure of these European meetings don’t make any sense as long as you subscribe to the conventional wisdom’s categories in which Ms. Merkel is the upholder of European peace and cooperation and Mr. Orban is the evil nationalist trying to destroy Europe. If you undergo a gestalt shift, however, in which you suddenly realize that Ms. Merkel is attempting to destroy the networks of international treaties under which the E.U. was built up to reduce Europe to a New Order under the suzerainty of the Berlin-Brussels axis, while Mr. Orban is standing up for Europe by advocating the necessity of E.U. perimeter defense, then things becomes a lot clearer.