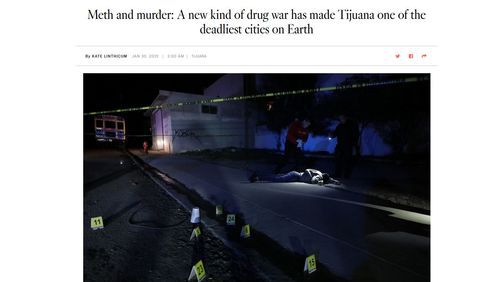 Meth and murder: A new kind of drug war has made Tijuana one of the deadliest cities on Earth
By KATE LINTHICUM, JAN 30, 2019
| TIJUANA

Tijuana, a city of 1.8 million that not long ago was celebrating a major reduction in violence, is in the grip of an unprecedented homicide crisis.

Substantial border walls were built in San Diego County in the 1990s, which did a lot to help San Diego fulfill its potential.

The root cause of the bloodshed is fundamentally different from previous iterations of violence in Tijuana.

In the past, the body count was driven by powerful drug cartels battling over lucrative trafficking routes to the United States. Now the main cause is competition in a growing local drug trade, with low-level dealers sometimes dying over the right to sell drugs on a single street corner.

Interestingly, we are constantly told by the U.S. press that there will never ever be another immigration surge from Mexico because life is so nice there now. In contrast, we are told that caravans must flee Central America because of the high level of criminal violence there.