Originally posted here on VDARE.com on this day in 2014.

Every city news outlet should replicate the New York Post's detailed report on the effects on local schools, including dollar costs, from the flood of illegal alien kiddies from Central America.

Educating backward children from the Third World is an expensive project. One example is Lynn Massachusetts, where the mayor had to rejigger the entire budget by reducing funds to city departments to pay for the extra costs of 600 illegal kids. Those needs include free food, tutors, Spanish-speaking teachers, psychological counseling and healthcare. Some of the little aliens don't even understand Spanish but were raised speaking indigenous languages like Kanjobal or Ixil. Some have never attended school at all. 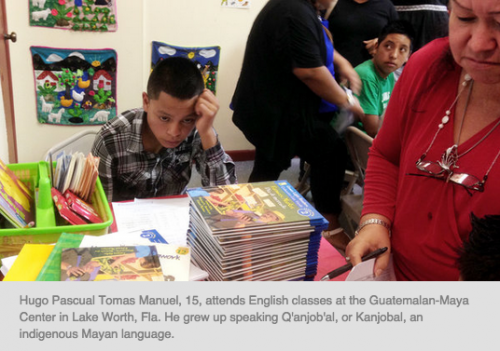 An administration education bureaucrat opined, “The DOE believes that every child has a right to a great education," and that means any foreign kid who can bypass the border gets the whole education-welfare enchilada courtesy of the unwilling taxpayer.

The upshot is this: either taxes are raised to pay for the higher school costs or resources are moved around so citizen kids get less so illegal alien kids can get more. Every American parent with a kid in public school should be concerned and angry about the downgrade.

New York has sent a warning to its schools: Expect more illegal immigrants.

The city Department of Education has told principals it plans this year to enroll 2,350 migrant children from Central America who crossed into the United States unaccompanied — with many more to come.

“It is expected that children will continue to arrive in large numbers in the coming years,” says a DOE memo to principals obtained by The Post.

The notice comes as the city rolls out a $50 million red carpet for 1,662 minors who crossed the border this summer to escape ­violence and gangs in Guatemala, Honduras and El Salvador.

In the “surge,” 5,000 of the 63,000 migrant kids caught trying to cross US borders — or who turned themselves in for refuge — have been released to relatives or other “sponsors” in New York state. Most live with other illegal immigrants.

In the city, Queens has received the highest number of unaccompanied children, 732, followed by Brooklyn (434), The Bronx (433), Manhattan (63) and Staten Island (less than 50), federal reports show.

The recent arrivals join an estimated 350,000 children of illegal immigrants already in New York state — about 12 percent of the public-school population.

The DOE refused to discuss the exact numbers of recently enrolled children, claiming it would violate student privacy. Officials ignored questions about the cost.

But the costs could soar, because the youths — many of them victims of poverty and abuse — will need state-mandated English-language instruction, free or reduced-price lunch, and a range of other services, including psychological counseling, medical and dental.

“The DOE believes that every child has a right to a great education, and we are committed to providing children who have escaped violence with the academic foundation and access to services that they need to establish a path to long-term achievement,” said DOE spokeswoman Devora Kaye.

But parent leaders worry the ­influx will strain school budgets.

“Unless the mayor, governor or president announces that funds will be made available immediately, our already-struggling schools will have to provide more,” said Sam Pirozzolo, vice president of the New York City Parents Union.

“NYC public schools are already failing to meet the needs of the students they have — 70 percent cannot read, write and do math at grade level. How can they handle thousands of new students competing for the same services without things getting worse?”

Under US law, all children have a right to enroll in school and ­receive government services, ­regardless of immigration status.

On Long Island and upstate, several school districts have been accused of blocking enrollment of migrant youths by demanding a birth certificate, proof of residency and education records from their home countries.

DOE has instructed staff to register them without delay and follow up later on documentation.

“In the city, they don’t tend to give you a problem,” said Manhattan-based immigration lawyer John Cavallo.

DOE representatives even sit at a desk in Immigration Court downtown, where the migrant kids appear for hearings, to help them enroll in school and sign up for free health care.

In court, Melvin Bonilla, 17, said he traveled alone from Honduras on a “scary” journey to the United States four months ago. He lives with an uncle in Brooklyn but has skipped school.

Bonilla told Immigration Judge Virna Wright he finished sixth grade in Honduras and had not enrolled in a school here because his uncle wanted him to learn English first and was paying for lessons. Wright ­instructed him to register.

Children can stay in the country if they convince authorities that they faced harm or persecution in their native land. Judges may also grant “special immigrant juvenile” status to a child found abused, neglected or abandoned.

The migrant kids are not directly affected by President Obama’s executive orders last week to let 5 million illegal immigrants stay in the country. One order exempts from deportation the parents of permanent residents or anyone born in the United States. Another expands relief to “Dreamers” brought here illegally before age 16 — and before Jan. 1, 2010.

The orders place “recent arrivals” in the same priority for ­deportation as suspected terrorists and felons. The feds are processing the recent flood of ­migrant kids more quickly, Cavallo said.

“While others wait years for their hearings, the recent arrivals get scheduled within weeks or a few months at most,” he said. “The message is: You come now, you’re going to get arrested and deported right away.”

But Obama vowed to deport “criminals, not children,” and critics contend his actions will encourage more kids to flee to the United States to get amnesty.