This Day In VDARE.com History, 2008: The Winchester Atrocity: Down The MSM Memory Hole While Cops Claim It's Not A "Racial Crime"

Originally published here on VDARE.com on this day in 2008. All four rapists and murderers were convicted, one sentenced to life without parole, three sentenced to death. This took five years. None of the three who were sentenced to death have actually been executed. Wikipedia, as of today, still contains a statement denying any racial motivation in the attack. 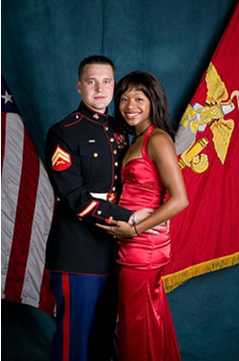 It is now 40 days since the tortured corpses of Marine Sgt. Jan Pawel Pietrzak, a Polish immigrant, and his African-American bride of two months, Quiana Jenkins-Pietrzak, who was gang-raped and tortured via "sexual penetration with a foreign object" were found in their new home in the small, Riverside County town of Winchester, CA. I have dubbed this crime "The Winchester Atrocity".

Although on the November 7 Good Morning America, Chris Cuomo said "there's more reporting to be done, to find out what's really behind this," ABC News has (as I predicted on November 11, 2008) dropped the matter. And, with the exception of a November 12 New York Daily News story, and a brief story about the accused's not guilty plea, American media silence has reigned regarding the case since November 10.

As journalists write the lies that are the first draft of "history," they are guided by the lofty moral principle that some lives are more equal than others. Thus have the MainStream Media [MSM] sent the Winchester Atrocity down the memory hole.

Apologists for the MSM tirelessly repeat the cliché about cable TV's introduction of a "24-hour news cycle". (They mean Fox News; they never criticize socialist CNN.) The 24-hour news cycle has managed to run its endless loops of the same-old, same-old, including stories condemning "racist" European figures for responding to the selection of "Obama," as if they, and not we had a First Amendment, and blanket coverage of a single drunken white-on-immigrant killing in Long Island. But no further mention of the Pietrzaks.

On November 11, Veteran's Day, Pietrzak's mother, Henryka Pietrzak-Varga, wrote a letter, in Polish, addressed to the President-elect. She sent the original to a Polish newspaper, Dziennik Wschodni, and an English translation to the Daily News. The Polish story and the Daily News story discussing it ran on the same day.

In this age of anarcho-tyranny, Americans must often get their news of non-PC American incidents from foreign sources. A letter about black racism (or most anything else) addressed to George W. Bush would just be a waste of time. And there is the symbolism of writing of the murder of an interracial couple, in the home where they'd planned to raise their family, to a man born of such a union. Who said Poles aren't smart. 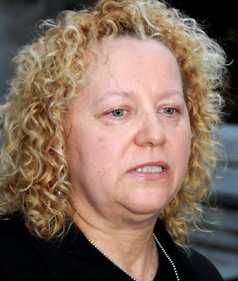 "Death at war at the hands of an enemy is, for a soldier, a patriotic honor.

"That fact alone enables his family to come to grips with the loss. The death of a soldier in his country and at the hands of his own soldiers ... is a source of endless suffering for his family….

"If it was a robbery, why didn't they come when nobody was home instead of in the dead of night - armed to the teeth?

"Why did this happen? What motivated them? What was it about my son and daughter-in-law that inspired such hatred and loathing?...

The questions are, of course, rhetorical. Mrs. Pietrzak-Varga obviously knows full well why her son and daughter-in-law were murdered, and, like Mrs. Pietrzak's mother, has rejected the official story. What she is saying is: "Attention must be paid."

The Riverside County prosecutor's office continues to claim the motive was robbery. But DA Rod Pacheco has himself given the lie to that story, which even ABC's Chris Cuomo scoffed.

Only one news story, however, has explicitly addressed what others have tiptoed around gingerly, or suppressed altogether.

"Quiana Jenkins-Pietrzak's father said he's heard talk that the Marines - all of whom are black - visited pain on his gorgeous 26-year-old daughter because she was black and Pietrzak was white. But he's not ready to accept that horrible possibility.

"'I have no thought on any of that until the whole thing comes out, until they finally figure out why that happened,' said Roy Jenkins." ['Nobody deserves death like this,' says DA in torture, slay of Marine, wife, By Nancy Dillon and Corky Siemaszko, November 10th, 2008, 5:07 PM, Daily News.]

If Mr. Jenkins waits on the authorities for a straight answer, he will wait in vain. Riverside County cops rushed to toe the PC line:

"The brutal murders of Brooklyn-raised Marine Sgt. Jan Pawel Pietrzak and his wife had nothing to do with the fact that he was white and she was black, a top cop said Thursday.

"'There's nothing to suggest what happened was a racial crime,' Investigator Josh Button of the Riverside County Sheriff's Central Homicide unit said. [Email them]'I've seen that reported, but it's just people looking at the case from the outside and making up their own minds….' [Brutal slay of Marine and his wife was not racially motivated, says cop, by Nancy Dillon and Corky Siemaszko, New York Daily News,  November 14, 2008]

When the U.S. Marine Corps used to say that it was looking for "a few good men," somehow I don't think it had these four in mind:

John and Miller served directly under Sgt. Pietrzak. All four men confessed to elements of the crime, blaming certain acts (e.g., the rapes) on their accomplices, while denying their own culpability for them. At least three of the suspects sound like gangbangers or wannabes. Black and Hispanic gang-bangers are welcome, but applicants with white supremacist ties are automatically screened out of the recruiting process. Only white groups count as "hate groups".

Pvt. Kesuan Sykes, who admitted to cutting off the wife's clothes, goes by the nickname, "Psycho". Lance Cpl. Tyrone Miller, who allegedly forced his way in the home by sticking a shotgun in Pietrzak's face, calls himself "Cripgeneral" on his Myspace page, and is being investigated for possible ties to the Crips gang. Pvt. Emrys John, 18, of Baltimore, named as the shooter by the three other suspects, had placed the photo caption, "Chillin waitin 4 da killin," on his Myspace page. John is "an admitted collector of knives and swords", who also wrote that in his spare time, "shooting s—" and "blowin s— up" are a great "stress reliever." According to friends of Pvt. Kevin Cox, he is a follower.

Posters at newspaper Web sites complain of pervasive censorship against people explicitly voicing their suspicions that the murders were racially motivated.

The most despicable rumor of all was floated in a major newspaper. Alleged reporters Angela Montefinise and Brad Hamilton wrote in "Killer Marine's Revenge Motive", in the November 9 New York Post, that "a close friend" of alleged shooter Emrys John, whose anonymity Montefinise and Hamilton protected, claimed that although John got along fine with Pietrzak, Tyrone Miller had "complained of being mistreated by" Pietrzak: "John told me the sergeant was getting on Miller for the little things, and I guess they got sick of it. I feel they just went over there to scare them, not to kill."

Well, in that case let's give them all honorable discharges and a tickertape parade!

In the context of the report, clearly the "friend" fancies that her phony story is both credible and mitigates the killers' guilt.

It is a common practice by journalists to go easy on their sources. But there is no moral or professional obligation to do so. My hunch is that reporters typically do it because they agree with their sources. If someone claiming to be a source is peddling a story that is moronic and/or has presuppositions that support pure evil, a responsible journalist has no business reporting it, or may only mention it in the course of exposing it and its purveyor's dishonesty and/or vileness.

In his Pulitzer Prize-winning, 1985 study of Boston's insane, federally-imposed experiment with forced busing for racial integration, Common Ground J. Anthony Lukas, then a New York Times reporter with impeccable liberal bona fides, provided four different explanations for why black Boston boys and young men engaged in crime: Money, their own racism, peer pressure and thrill-seeking. But were any Timesman to write with such honesty today, he would quickly become an ex-Timesman.

I called the Riverside County DA's Office to check out the rumors. But at press time, spokesman Michael Jeandron had yet to respond to my message.

At message boards, some black posters showered contempt on the victims and those who condemned the killings. But other black posters, such as the one below, insisted that the killings were racially motivated, and deserving of honest reporting and the ultimate punishment.

"I was sickened to hear of the murder of Sgt Pietrzak and his wife Quiana, two wonderful young people…. No, I didn't know either of them personally, but when I heard the news about their murder I took it very much to heart nonetheless...and most of my weekend was spent in tears and in outrage. Why? Because I am a former woman Marine, a black woman who was married to a white man, another Marine, while on active duty...and I remember all too well how back then there were a number of people who tried to made our lives a hell on earth simply because we were an interracial couple!

"What I find incredulous is how the media, officials and even ordinary citizens are attempting to play down the true and obvious reason why Sgt. Pietrzak and Quiana lost their lives on October 15. So many people are in so much denial regarding this case. I don't believe for a nanosecond that this crime against the Pietrzaks was financially motivated. If money were the only motive, then why commit a sexual assault? why attempt to set the house on fire? Why are they behaving like the terrorist these "marines" are supposedly protecting us against?

"Everything about this case points to a racially motivated hate crime which is fueled by sexual jealousy! It is as much of a hate crime as what happened in 1955 to Emmett Till and in 1998 to Matthew Shepherd….

"All who truly love America and personal freedoms and civil right cannot allow others to sweep the facts under the rug. Silence and denial equal complicity...and the reluctance of the powers that be to tell the TRUTH about this tragic case, and call it what it is...A HATE CRIME... will ensure that justice will not be served on behalf of the Pietrzaks, and that they will become yet another anonymous and forgotten statistic.

"As far as I'm concerned, those four MAGGOTS who committed this act of barbarism have lost the right to refer to themselves as Marines. They WILL be punished...if not in this world, then for sure in the Next!" [Marine Sgt Jan Pawel Pietrzak, Wife Quiana, Tortured and Murdered by Four Black Marines, Posted by Janet Shan, November 7, 2008, blackpoliticalthought.blogspot.com]

No sanctuary for them.