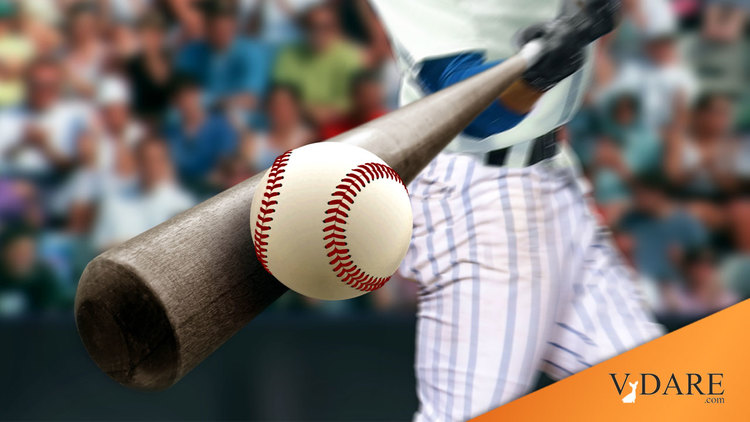 The problem is that the game is more fun to watch when guys hit the ball and everybody runs around rather than a contest of strikeouts, walks, and homers.

Well, they changed the ball to make it go slightly less far and fiddled with the seams.

Another more subtle change is that baseball started measuring and publishing pitcher’s spin rates in 2015, and what you can measure, you can improve. How fast the ball is spinning has a big effect on how it will move in the air. Major league hitters can hit even a 100 mph fastball if its arc is predictable, but put enough spin on the ball and it will do strange things.

As it has become easier to measure spin rates, pitching philosophy has shifted back toward pitching like Sandy Koufax in 1966: put a huge amount of spin on the ball to throw sailing high fastballs and dive-bombing curve balls.

Back in 2015, the Dodger pitchers averaged 2165 revolutions per minute, which was above average in the majors. But this year, they are averaging 2599 RPM, a 20% increase.

One reason is because they picked up last year’s National League Cy Young winner Trevor Bauer (or as he calls himself “Mickey Mouse Cy Young award winner” because 2020 was only 60/162nd of a normal season), an ornery high IQ nerd jock rather like golfer Bryson DeChambeau. As I wrote in 2019 in “Revenge of the Baseball Nerds,”

The MVP Machine points out that the new ability to measure spin on pitches may be encouraging a novel form of cheating by pitchers to increase their spin rate. Some pitchers long applied spit, Vaseline, or other slippery substances to one side of the ball to make it dip unpredictably. But if you use something sticky on your fingers, such as pine tar, you can put more spin on the ball. While umpires try to police spitballs, they don’t care about sticky substances, agreeing with the pitchers that pine tar, while technically illegal, makes hurlers less likely to lose control of a pitch and hit a batter in the face.

Last season Bauer of the Cleveland Indians more or less implied on Twitter that his old teammate from UCLA, Gerrit Cole of the Houston Astros [now the star pitcher of the Yankees], must have been putting stickum on the ball to boost his spin rate. Bauer and Cole had hated each other while on the Bruins, carrying out a classic nerd vs. jock feud.

To make his point that the cunning Houston Astros must have taught Cole to use pine tar or the like to make the ball spin faster, in 2018 Bauer came out for the first inning of a game and somehow boosted his spin rate from 2300 to 2600. He then went in the clubhouse, presumably washed the stickum off his hand, and spent the rest of his start throwing with his normal spin rate.

In 2020 Bauer’s spin rate was much higher than his career norm and he had his best season. In the off-season he signed a 3-year $102 million contract with the Dodgers. And he remains dominant, striking out 11 in a 3-2 win over the first place San Francisco Giants last night.

The most plausible sounding interpretation is that Bauer must have felt like he’d raised the issue of pitchers using stickum to boost their spin rates as much as he could, and if the baseball authorities weren’t going to do anything about it, well, if he couldn’t beat them, he’d join them.

Bauer is obviously one of the smartest pitchers so his very public surrender to the stickum cheaters has to be influential.

Early this season, the umpires hauled off a bunch of balls Bauer had thrown and sent them to a lab, but so far nothing has come of it.

Because the pitcher plans rather than reacts like the hitter, the more data available the more it’s likely to benefit pitchers. So these kinds of pro-pitcher trends are likely to keep going.

The early importation of sensors from high-tech from golf into baseball seemed to benefit hitters because the equipment was better suited to answering golf-like questions such as what’s the best launch-angle for slugging a baseball. But it has since been adapted for pitching.

At this point, they should probably do something radical like move the pitcher’s mound back three feet while having all stadiums move home plate back ten feet to make homers have to travel 10 feet further. Then do subtle changes like mowing the outfield grass so the nap runs away from the hitters to make the ball roll faster between the outfielders and maybe even slope the outfield slightly downhill to get more balls to roll to the fence so we’d get more triples.