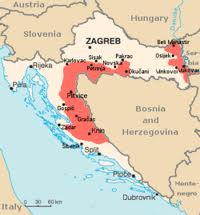 I hadn't realized before how much the American-encouraged attack by Georgia on Russian-backed South Ossetia in 2008 looks to the Kremlin like the same playbook as the two American-planned Croat offensives against the Serb breakaway Krajina republic in Croatia in 1995. The second American-planned offensive by the Croats, Operation Storm, was the biggest land battle in Europe since 1945.

It's hard for Americans to remember all the times our side has militarily pushed around other sides. But the Russians remember, so it's worth it to recall how similar Croatia in 1995 and Georgia in 2008 look to the Kremlin.
Slavic Orthodox Serbia is a sort of mini-Russia that was at the core of a sort of mini-Soviet Union called Yugoslavia. So, Russians paid a lot of attention to what happened to Serbia in the 1990s, just as they did in 1914 when the Czar destroyed his dynasty in defense of Serbia.

Serbia is kind of a cultural outpost of Russia, the way Afghanistan is oddly like Arabia. Just as the Afghans have all the backwardness of the Arabs but without any oil, the Serbs have managed to make themselves highly unpopular without ever permanently achieving the defensive depth of the Russians.

The test run for Croatia's American-nurtured offensive capability was Operation Flash in May 1995. It was followed by the big Operation Storm in August 1995 that ethnically cleansed 150,000 or more Serbs from Croat territory. This was the largest European land battle since 1945.
I can recall an NPR war correspondent explaining at the time that US military men had been training the Croats for months in how to fight like a modern Operation Desert Storm army, so it was going to be a pushover, which it was: four days of fighting and then it was all over except for the refugees. When people say violence never solves anything, well, Operation Storm pretty much solved Croatia's problems with having a large, violent Serbian minority.
Since then, however, a lot of opacity has been dumped on American involvement in preparing the groundwork for Operation Storm. Although it was the best executed military operation in a war that generally resembled an extended gang fight, not surprisingly some Croats ran amok and committed war crimes — not as bad as what the Serbs did, in between the two Croat offensives, to Muslim men at Srebrenica in Bosnia in July 1995, but still not nice.

Also, parts of the U.S. government didn't tell other parts what they were up to. The U.S. Ambassador to Croatia, for example, appears to have been sincerely appalled by the huge ethnic cleansing by Croatia, but he wasn't kept in the loop of planning the offensive. Or something.

There was a UN ban on arms shipments to participants in the Yugoslav wars, so with official U.S. military involvement blocked from active involvement, the Croat government hired Military Professional Resources, Inc. of Alexandria, VA, which employs retired U.S. military officials to advise countries okayed by the U.S. government. Most notably, MPRI employed General Carl Vuono, who had been U.S. Army Chief of Staff from 1987-1991 (i.e., during Desert Storm; i.e., he knows what he's doing). Supposedly, Gen. Vuono was just in Croatia in 1995 to advise the Croatian army on how to "transition to democracy" and subjects like how to fight AirLand Battle 2000 never came up. I mean, if you were a Croatian general intending to open a front 390 miles long, why would you ask one of the main architects of Operation Desert Storm for tips and pointers on how to fight Operation Storm? You'd ask him for advice on democratic transitioningness instead. And the similarity of names of the operations is just a coincidence.
MPRI, interestingly enough, was in Georgia in 2008 training Georgian commandos. But, US involvement with the Georgian Army didn't have to be limited to deep state connections: because Georgia had just been put on the first rung for admission to NATO, 1,000 U.S. troops were in Georgia conducting military exercises with Georgian troops in July 2008: the Immediate Response training exercise. Within 10 days of the American troops leaving, 10,000 Georgian troops surged across the internationally established and peacekeeper maintained line of control into South Ossetia. But the Georgian commandos failed to take out the Roki Tunnel, and the Georgian army was defeated by Russian reinforcements. (Note that neither army performed terribly well.)
So, from the Kremlin's perspective, the Georgian 2008 attack looks a lot like the Croatian 1995 attacks. A major difference in the outcome was that the Yugoslav national army didn't come to the defense of the Serb breakaway republic of Krajina in 1995 the way the Russian national army came to the defense of the breakaway republic of South Ossetia in 2008.