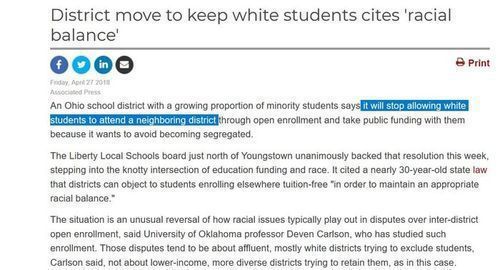 An Ohio school district with a growing proportion of minority students says it will stop allowing white students to attend a neighboring district through open enrollment and take public funding with them because it wants to avoid becoming segregated.

The Liberty Local Schools board just north of Youngstown unanimously backed that resolution this week, stepping into the knotty intersection of education funding and race. It cited a nearly 30-year-old state law that districts can object to students enrolling elsewhere tuition-free “in order to maintain an appropriate racial balance.”

The situation is an unusual reversal of how racial issues typically play out in disputes over inter-district open enrollment, said University of Oklahoma professor Deven Carlson, who has studied such enrollment. Those disputes tend to be about affluent, mostly white districts trying to exclude students, Carlson said, not about lower-income, more diverse districts trying to retain them, as in this case.

America is slowly running out of white students to fight segregation with.

The war on segregation might eventually require construction of walls with strict Checkpoint Charlie-style gates around each school district to prevent white flight. Or perhaps white students will be nationalized and conscripted into Anti-Segregation Brigades to be dispatched to school districts across the country that don’t have enough Magic White Students.