The Trump Re-Election Trump Card: People Who ARE Better Off Than They Were Four Years Ago 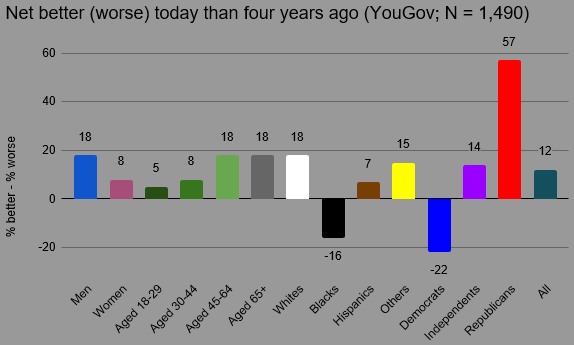 Trump voters are even more sanguine about their professed personal situations than Republicans are. Trump voters net in at 78% compared to Republicans’ 57%. Critics say Trump hasn’t done anything of substance for his supporters. Whatever the reality is, deplorables don’t appear to see it that way.

The question doesn’t prompt or prime respondents about politics in general or Trump in particular. It simply asks “are you better off now than you were four years ago?” The results display obvious partisan influence, but this is a subjective measure of more than just narrow partisan political leanings.

That zoomers and millennials trend modestly optimistic is especially surprising. If you’re a boomer with six- or seven-figures worth of investments, it’s easy to see where the positive assessment comes from. Your market index fund has increased by nearly 50% since Trump was elected. Putatively indebted twenty-something with no money and no prospects, though?

On net, these results bode well for Trump in November.