The Subprime Bubble in Living Color 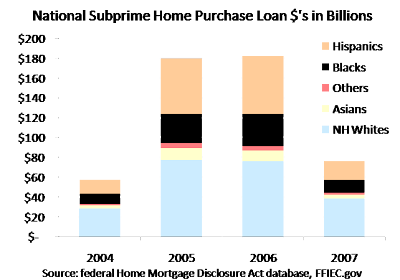 So, I decided to create some graphs myself. After all, my tax dollars pay for the massive federal Home Mortgage Disclosure Act database (Table 11-3, to be precise). The government runs this system to make sure that minorities get enough mortgage money. I guess we can say:

Unfortunately, before 2004 the HMDA didn't break out subprime loans (which it cryptically calls "Reported Pricing Data"). But presumably the subprime dollars originating were much lower before 2004. We can more or less date the beginning of the subprime explosion to President Bush's October 15, 2002 White House Conference on Minority Homeownership, in which he gave a big wink to the mortgage industry to put the pedal to the metal on zero down and zero doc loans in the name of Bush's goal of adding 5.5 million minority homeowners.

Of course, plenty of white deadbeats got subprimes, too. This racial-equality-in-access-to-the-American-Dream stuff was just a cover story for debauching credit standards.

But, you've got to admit, invoking the sacred war against racist redlining was one hell of an effective cover story ... Who was going to be so racist as to publicly say that we shouldn't expand homeownership for minorities? Who would say that minorities didn't have equal creditworthiness?

It was such a fantastic cover story, that here it is, almost the middle of 2009, and you are just now seeing a graph of who got the money, even though the 2006 numbers have been available for free on the Web since September 2007!

We still don't know the subprime default rates nationally by ethnicity, but the recent Boston Fed study found that the default rates on black and Hispanic subprime loans in Massachusetts were about twice the rate of white subprime borrowers. If that holds true for the whole country, then minorities appear to account for roughly two-thirds of defaulted subprime dollars.

Why haven't we been hearing this in the press? Well, it's just not the kind of thing that is talked about in polite society. I mean, really, we can spend all day going back and forth over who loaned whom hundreds of billions of dollars and who didn't it pay it back, but, in the final analysis, shouldn't we be proactively focusing upon hope and change? And the American Dream? And vibrancy? Never forget vibrancy.

- In 2004, subprime lending exploded, with minorities getting 51% of the home purchase mortgages (not counting the negligible streams of FHA and VA money). All this new demand for homes from people who couldn't qualify for loans before drove home prices through the roof in some parts of the country.

- In 2005, subprime lending reached a bizarrely high plateau, with minorities getting 57% of the subprime money handed out that year. - In 2006, subprime lending stayed high, but industry was scraping even farther down to the bottom of the barrel to find all the people who couldn't even qualify for a subprime loan in 2005. Minorities got 58% of that new subprime money.

- In 2007, the air started coming out of the bubble as our financial geniuses started to realize that the kind of people who got subprime loans in 2005 and especially 2006 weren't terribly likely to ever earn enough to pay them back. Total subprime lending dropped, as did minority share (down to 50%).

Minorities got about 44% of subprime refinancing and home improvement loans in 2006, although those had less effect on driving home prices up.

Interestingly, minorities averaged larger subprime home purchase mortgages in 2006 than white subprime borrowers got. The average white subprime loan originated in 2006 was $183,000, while the typical black subprime loan averaged $191k, Hispanic $242k, and Asian $326k. Presumably, this is because quite a few whites live in low cost rural areas, while blacks are concentrated in metropolitan areas, and Hispanics and Asians are most numerous in super-bubblicious California.

In California, where a majority of the country's defaulted mortgage money (prime and subprime) has been lost, minorities got a much higher percentage of subprime lending. In the five counties of Greater Los Angeles (LA, Orange, Ventura, San Bernardino, and Riverside), minorities got 79% of subprime dollars in 2006: 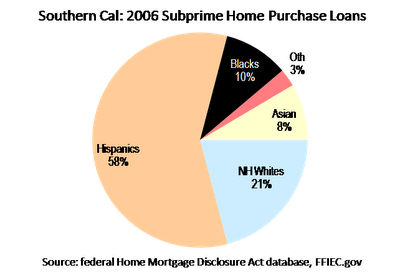 California's bubble pretty much drove the bubble in the adjoining states of Arizona and Nevada, which with Florida, covers the great majority of foreclosed upon mortgages when measured in dollars.