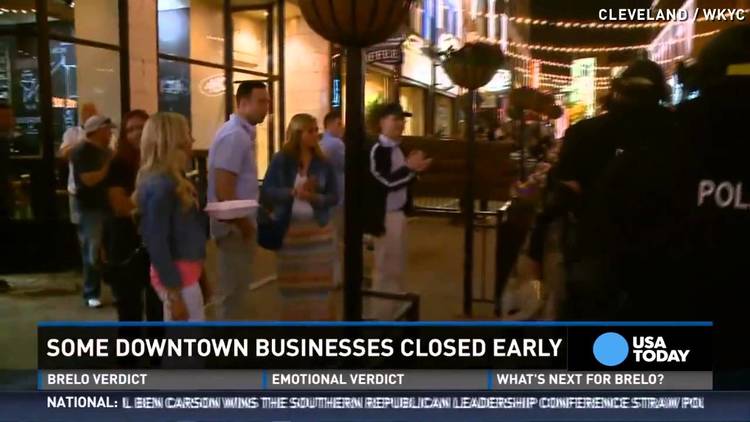 The Riots in Cleveland and What They Portend

This week's exercise in property destruction and subsidized chaos is taking place in Cleveland, Ohio.  There is much wailing and gnashing of teeth among the Main Stream Media because 71 people were arrested during "protests." Of course, what they were actually arrested for was much different than waving signs.

A protest shut down state Route 2 before police convinced those blocking the highway's 60-mph traffic to disperse; demonstrators became "disruptive" at the mixed-use Tower City Center, resulting in arrests and businesses closing their doors; a protester threw a restaurant sign at a bystander and other protesters stepped in when police tried to arrest the sign thrower; and protesters pepper-sprayed patrons dining on restaurant patios, Williams said.

Those arrested included 39 men and 16 women, with juveniles and "other adults" filling out the arrest tally, the chief said.

The charges include felonious assault, aggravated rioting, unlawful congregation and failure to disperse, he said. The misdemeanors will be charged within 24 hours of the arrests, and the felonies within 36 hours, he said.

The judge who cleared Officer Michael Brelo of wrongdoing made a remarkable statement that shows how politicized such investigations have become.

“I will not sacrifice him to a public frustrated by historical mistreatment at the hands of other officers,” Judge John P. O'Donnell of the Cuyahoga County Common Pleas Court wrote in the opinion.

But "sacrificing" Brelo and other officers is precisely what the federal government has in mind. And even a tenuous peace returns to the city streets, the Justice Department is already moving to bring the police department under its heel.

Cleveland has reached a settlement with the Justice Department over what federal authorities said was a pattern of unconstitutional policing and excessive use of force, people briefed on the case said Monday.

The settlement, which could be announced as early as Tuesday, comes days after a judge declared a Cleveland police officer not guilty of manslaughter for climbing onto the hood of a car and firing repeatedly at its unarmed occupants, both of them black. The verdict prompted a day and night of protests and reignited discussions about how police officers treat the city’s African-American residents.

The details of the settlement were not immediately clear, but in similar negotiations in recent years, the Justice Department has required cities to allow independent monitors to oversee changes inside police departments. Settlements are typically backed by court orders and often call for improved training and revised use-of-force policies.

How many judges, mayors, or police chiefs will continue to resist calls to "sacrifice" an individual officer when a frankly anti-White Justice Department is looking over their shoulder? And as there is not one city community in America that can fail to be convicted of "disparate impact" on African-Americans, the inevitable endgame of all of this is the federalization of every police department in America.