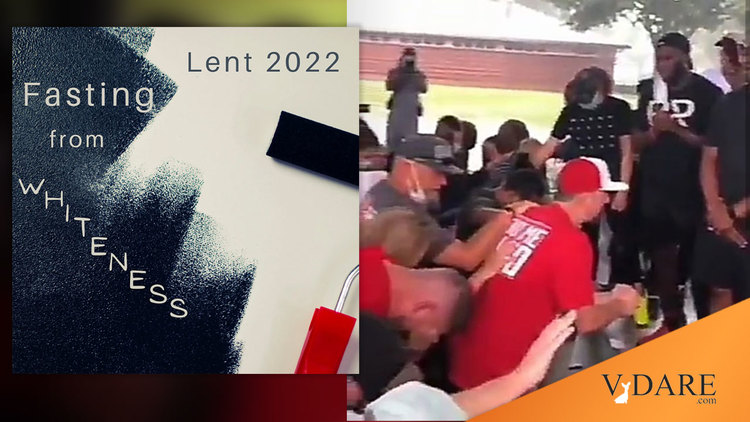 The Religion Of Anti-Whiteness: Church In Chicago Engages In "Fasting From Whiteness" For Lent

For many white liberals, God has been supplanted, with these true believers devoted to the religion of anti-whiteness.

Chicago-area church announces it is ‘fasting from whiteness’ during Lent, NY POST, April 5, 2022

A church in suburban Chicago said it is “fasting from whiteness” during Lent, the 40-day period preceding Easter — by abstaining from performing hymns composed or written by white musicians.

First United Church of Oak Park announced on its website that it “is doing a mix of ‘giving something up’ and ‘taking something on.’

“In our worship services throughout Lent, we will not be using any music or liturgy written or composed by white people. Our music will be drawn from the African American spirituals tradition, from South African freedom songs, from Native American traditions, and many, many more,” it said.

“For Lent, it is our prayer that in our spiritual disciplines we may grow as Christians, united in the body of Christ with people of all ages, nations, races, and origins,” the church added.

The house of worship also erected a “Fasting from Whiteness” sign on its front lawn, according to Turning Point USA, which reported that the church is using reflections and thoughts called “evotionals” for the “fast.”

The outlet obtained alleged screenshots of a March 29 entry titled “Kindness and Privilege.”

“We honor our fast from whiteness this Lent by prioritizing the voice of Bruce Reyes-Chow through a chapter of his book, ‘In Defense of Kindness,’” it reportedly says about the minority pastor.

Reyes-Chow authored the 2016 book “Don’t Be an Asshat: An Official Handbook for Raising Parents and Children” and 2013’s “But I Don’t See You as Asian: Curating Conversations about Race.”

The excerpt published by Turning Point USA says people who oppose violent protests speak from a place of privilege — and should therefore refrain from trying to stop them.

“For many of us, being uncomfortable about public protests or what we perceive as aggressive expressions of frustration simply identifies our privilege and our ability to shield ourselves from the struggles that others are facing,” Reyes-Chow reportedly wrote.

“Most people do not engage in public protest or in expressing anger that may put risk on their life, work, or status. So when groups of people are pushed to their boiling point, the least helpful thing to do is to silence them,” he wrote.

In a video posted by the church, the Rev. Lydia Mulkey, identified as the associate pastor of education, explained the fast, the Washington Times reported. 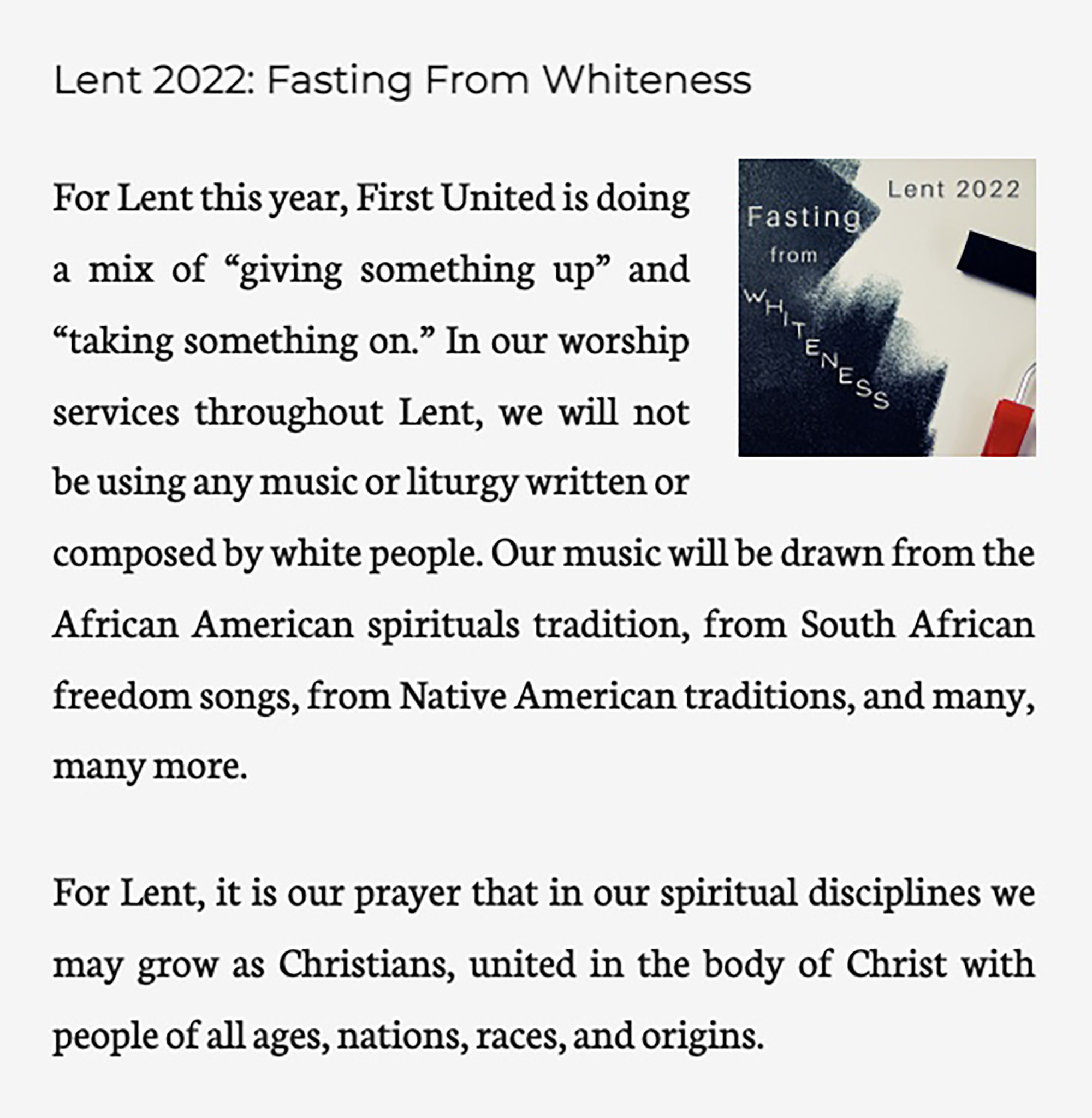 “In this fast from whiteness, of course, I cannot change the color of my skin or the way that allows me to move through the world but I can change what I listen to, whose voice I prioritize,” Mulkey said.

“And so that is kind of the place for our worship services, through Lent, that we would fast for a time from prioritizing white voices,” she added.

If you are white and you are a heretic to the religion of anti-whiteness, there exist no indulgences to procure ultimately freeing oneself from the wrath of those committed to being the most vociferous and devoted to their growing cult.

These people are not just nuts, but they’d apologize to the black criminal who mugged them on their way to fasting from whiteness, confessing to them as they lay in a puddle of their own blood that they deserved this righteous beating, and to have their possessions taken by a non-white.