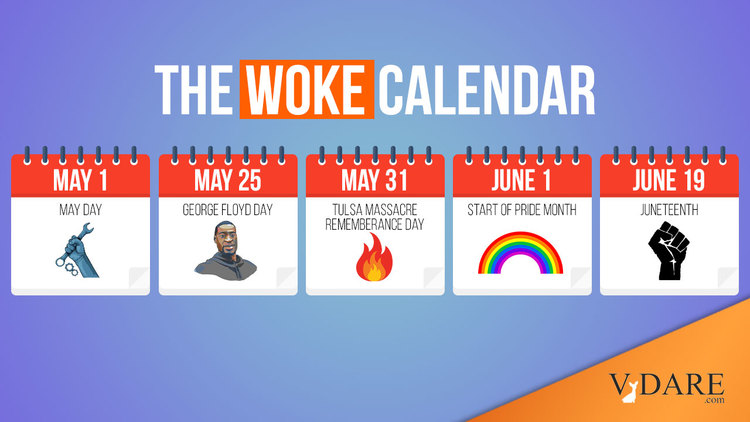 May-June will become the liberal’s replacement for November-December as the holiday season.

But don’t forget the Bob Meusels and Tony Lazzerris of this powerhouse lineup. Memorial Day can be repurposed for celebrating all the tranny hookers murdered by their johns, while Flag Day (June 14) can be retconned to commemorate the invention of the rainbow gay flag in San Francisco in 1978.

The music business will soon aim to have “Pride hits” the way there used to be Christmas music season.

George Floyd, Tulsa and Juneteenth also help with the awkwardness blacks faced having to previously deal with the previous regime’s holidays of Father’s Day and Fourth of July so close together. (Plus, wasn’t Memorial Day too quasi-Republican in sentiment anyway?)

Every year America’s new holiday season will kick off Black exuberance (shootings), gays partying even harder, and will be the last dose of liberalism kids get from schools before they begrudgingly are given back to their parents for a few months.

Maybe when we go full pagan the Liberal Holiday Season can culminate on the Summer solstice. [Conservatives already feel like the virgin police chief (up against The Chad pagans) in The Wicker Man.]