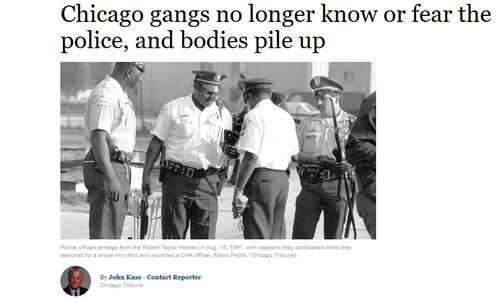 The New Chicago Way: Chicago Gangs No Longer Fear The Police, And Bodies Pile Up.

There is another thing to consider about the differences between August 1991 and now. It isn’t quantifiable; it won’t fit on a mayoral white paper, there are no numbers to it. But it was reported, with a video, by Tribune journalists Megan Crepeau and Erin Hooley a few days ago under the headline: “Heckling and gunfire as police investigate shooting: ‘We’re just playing.’” Police were investigating reports of a shooting in bloody Englewood when about 10 young men confronted them, harassed them, mocked them on the street, hurling epithets, angry, defiant. “Every cop saw that video,” O’Connor said. “One big difference is that now, on the street, there is no fear. Even in the ’90s, with all the killing, the gangs feared the police. When we’d show up, they’d run. But now? Now they don’t run. Now, there is no fear.”

Videophones, social media, the President, the press: all factors have come together to encourage these kind of dominance displays by street thugs.

If the cops whomp a mouthy teen, the video will go global. Hillary will retweet it.

If the cops don’t, the video will go local of the thugs showing off their street cred.

In this video, the cops behave as best they can, engaging in their own dominance display, slowly advancing ominously on the thugs.

But it’s a waste of time and emotional energy when the cops are there to investigate a shooting.

A more subtle effect of these dominance displays is to further terrify witnesses who might help the cops find the shooter. If the cops are barely in control of their own crime scenes, good luck to you when the cops go home and you are left behind with these guys.