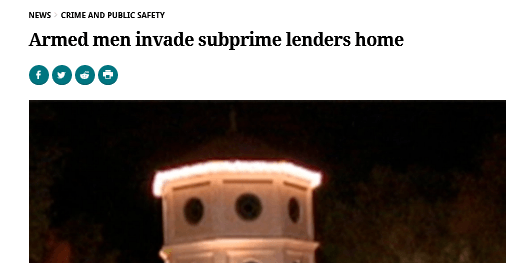 The Movie Quentin Tarantino Was Born To Make

I know that Tarantino hates making movies about anything other than other movies, but this Orange County Lebanese car salesman with a 3rd grade education turned subprime lender turned Hollywood producer was probably never living in the real world. He likely saw his whole life as straight out of Starsky & Hutch.

C'mon, Quentin, nobody cares about your crush on Goebbels. Make a movie about a SoCal hustler who uses the Grift of the Century, subprime, to turn himself, briefly, into a mogul. It's a natural for you.

Three people at the home of Daniel Sadek [to be played by Vince Vaughn or Eli Roth] suffered head injuries during the home invasion, and one of them was taken to the hospital for treatment. ...

Four armed men forced their way into a home at 3 Longboat, off Pelican Ridge, while another waited outside, Newport Beach police said.

The house was the scene of a fire two weeks ago. A Mercedes Benz CLK 550 parked in the driveway caught fire at 3 a.m. Thanksgiving morning and singed the house and garage before firefighters knocked it down. ...

He declared bankruptcy in Nevada two months ago.

With his earnings from Quick Loan, Sadek lived a high-roller lifestyle. He bought the Newport Coast mansion, a fleet of exotic cars and crashed some of them in a movie he financed called "Redline." He bought a condo in Las Vegas where he became a high roller at the blackjack tables. Court records list cash advances taken out on his credit card at casinos from Hawaiian Gardens to Lebanon [where he was born].

In court filings, he acknowledges gambling in the multi-million dollar range.

Police did not immediately know whether the men who paid Sadek a visit Tuesday night were collecting on a debt or were there to rob. They were taking cash and jewelry, Lt. Craig Fox of the Newport Beach Police Department said. ...

In September, Vanity Fair ranked Sadek No. 86 on a list of institutions and people most to blame for the nation's economic problems. The magazine called him "Predator Zero in the subprime-mortgage game," and quoted a competitor saying he "would have written a loan to 'an insolvent arsonist.'"

In May 2007, the Register reported that Sadek's company, Quick Loan, had been accused of predatory lending, deceptive underwriting and fraud in at least eight lawsuits. ...

Since the housing market collapse, Sadek's finances have fallen apart. Over the last two years, he's been sued in Superior Court a dozen times; Quick Loan Funding was sued 13 times locally in its last two years. ...

Court documents filed by his attorney in July said that Sadek was under medical care for an "extreme panic disorder" and regularly taking "substantial doses" of the anti-anxiety drug Xanax. At the time, Wells Fargo was trying to get Sadek to give a deposition in a lawsuit over his use of some accounts; but the court filing claimed he would have to take so much medication to make the trip to Temecula for the deposition that it might impair his concentration and memory.

Sadek got into home loans in 2002 after seeing how many mortgage brokers came into Fletcher Jones Motorcars, where he worked as a salesman.

Although his education had stopped at third grade, Sadek paid the $250 for a state lender license and started selling home loans through his company, Quick Loan Funding.

Over the next five years, Quick Loan wrote $3.8 billion in mortgages, lending money fast - and often on onerous terms - to people with shaky credit.

Sadek used the earnings to live the high life, buying a fleet of Ferraris, Lamborghinis and Porsches, dating a soap opera starlet and producing movies. He cultivated a rebel image, wearing a beard and hair to his shoulders, dressing in T-shirts and flip-flops, eschewing the typical mortgage banker's pinstripes.

His movie "Redline" starred his then-girlfriend, Nadia Bjorlin, comedian Eddie Griffin, and his fleet of Ferraris, Porsches and Saleen S7 exotic cars. [Eddie famously crashed one of his Enzo Ferrari's during a publicity event.] It cost him $31 million to make, distribute and publicize, he once told the Register, but only earned $8.2 million in ticket sales worldwide, according to Box Office Mojo. Sadek was sued in federal court by the Cartoon Network for failing to pay $845,000 in advertising for the film.

He flew private jets to Las Vegas, where he gambled with high rollers at the Bellagio Resort.