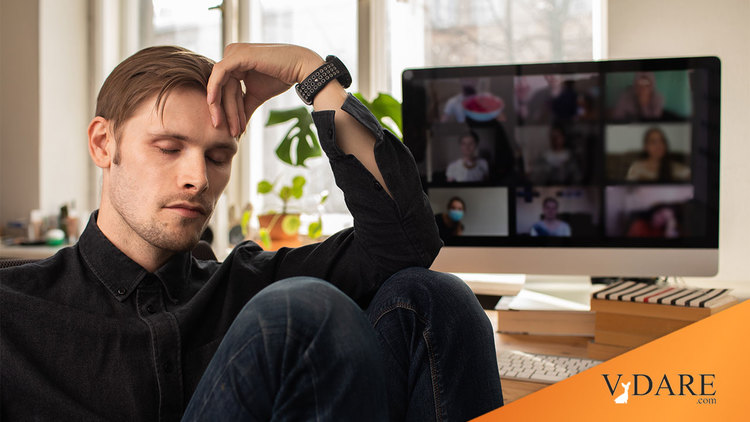 The Great Awokening of the last decade has been, if effect, Loser Liberation. Take everybody that, say, Aristotle would have considered less admirable and center them. Not surprisingly, Loser Lib is wreaking havoc within Leftist institutions by elevating losers to leadership and make their complaints the central subject of endless office politics.

That the [Alan Guttmacher] institute has spent the course of the Biden administration paralyzed makes it typical of not just the abortion rights community — Planned Parenthood, NARAL Pro-Choice America, and other reproductive health organizations had similarly been locked in knock-down, drag-out fights between competing factions of their organizations, most often breaking down along staff-versus-management lines. It’s also true of the progressive advocacy space across the board, which has, more or less, effectively ceased to function. The Sierra Club, Demos, the American Civil Liberties Union, Color of Change, the Movement for Black Lives, Human Rights Campaign, Time’s Up, the Sunrise Movement, and many other organizations have seen wrenching and debilitating turmoil in the past couple years.

In fact, it’s hard to find a Washington-based progressive organization that hasn’t been in tumult, or isn’t currently in tumult. It even reached the National Audubon Society, as Politico reported in August 2021:

Following a botched diversity meeting, a highly critical employee survey and the resignations of two top diversity and inclusion officials, the 600,000-member National Audubon Society is confronting allegations that it maintains a culture of retaliation, fear and antagonism toward women and people of color, according to interviews with 13 current and former staff members.

… FOR PROGRESSIVE MOVEMENT organizations, 2021 promised to be the year they turned power into policy, with a Democratic trifecta and the Biden administration broadcasting a bold vision of “transformational change.” Out of the gate, Democrats pushed ahead with the $1.9 trillion American Rescue Plan, funding everything from expanded health care to a new monthly child tax credit. …

And then, sometime in the summer, the forward momentum stalled, and many of the progressive gains lapsed or were reversed. Instead of fueling a groundswell of public support to reinvigorate the party’s ambitious agenda, most of the foundation-backed organizations that make up the backbone of the party’s ideological infrastructure were still spending their time locked in virtual retreats, Slack wars, and healing sessions, grappling with tensions over hierarchy, patriarchy, race, gender, and power.

“So much energy has been devoted to the internal strife and internal bullshit that it’s had a real impact on the ability for groups to deliver,” said one organization leader who departed his position. “It’s been huge, particularly over the last year and a half or so, the ability for groups to focus on their mission, whether it’s reproductive justice, or jobs, or fighting climate change.”

… This is, of course, a caricature of the left: that socialists and communists spend more time in meetings and fighting with each other than changing the world. But in the wake of Donald Trump’s presidential election, and then Joe Biden’s, it has become nearly all-consuming for some organizations, spreading beyond subcultures of the left and into major liberal institutions. “My last nine months, I was spending 90 to 95 percent of my time on internal strife. Whereas [before] that would have been 25-30 percent tops,” the former executive director said. He added that the same portion of his deputies’ time was similarly spent on internal reckonings.

“We’re dealing with a workforce that’s becoming younger, more female, more people of color, more politically woke — I hate to use that term in a way it shouldn’t be used — and less loyal in the traditional way to a job, because the whole economic rationale for keeping a job or having a job has changed.”

… The silence stems partly, one senior leader in an organization said, from a fear of feeding right-wing trolls who are working to undermine the left. Adopting their language and framing feels like surrendering to malign forces, but ignoring it has only allowed the issues to fester. “The right has labeled it ‘cancel culture’ or ‘callout culture,’” he said, “so when we talk about our own movement, it’s hard because we’re using the frame of the right. It’s very hard because there’s all these associations and analysis that we disagree with, when we’re using their frame. So it’s like, ‘How do we talk about it?’”

For years, recruiting young people into the movement felt like a win-win, he said: new energy for the movement and the chance to give a person a lease on a newly liberated life, dedicated to the pursuit of justice. But that’s no longer the case. “I got to a point like three years ago where I had a crisis of faith, like, I don’t even know, most of these spaces on the left are just not — they’re not healthy. Like all these people are just not — they’re not doing well,” he said. “The dynamic, the toxic dynamic of whatever you want to call it — callout culture, cancel culture, whatever — is creating this really intense thing, and no one is able to acknowledge it, no one’s able to talk about it, no one’s able to say how bad it is.”

The environment has pushed expectations far beyond what workplaces previously offered to employees. “A lot of staff that work for me, they expect the organization to be all the things: a movement, OK, get out the vote, OK, healing, OK, take care of you when you’re sick, OK. It’s all the things,” said one executive director. “Can you get your love and healing at home, please? But I can’t say that, they would crucify me.”

WHAT’S DRIVING THE upheaval can’t be disentangled from the broader cultural debates about speech, power, race, sexuality, and gender that have shaken institutions in recent years.

… “Maybe I can’t end racism by myself, but I can get my manager fired, or I can get so and so removed, or I can hold somebody accountable,” one former executive director said. “People found power where they could, and often that’s where you work, sometimes where you live, or where you study, but someplace close to home.”

… After the pandemic forced people into quarantine in March 2020, he noted, many workplaces turned into pressure cookers. “COVID has severely limited in-person tactical options, and in-person face-to-face activities are absolutely vital to volunteer-driven efforts,” he wrote to The Intercept. “Without these spaces, staff are more likely to become insular – a tendency that’s hard enough to combat even without this shift. Moreover, the virtual environment (zoom meetings) may be convenient for all kinds of reasons, but it’s a pretty lousy medium once there’s conflict in an organization. In-person face-to-face time, in my experience, is irreplaceable when it comes to moving constructively through conflict. I know this is not the full picture and probably not even the root of these problems or conflicts, but it’s almost certainly exacerbating them.”

We had tele-meetings in the 1990s, but they they were terrible at building rapport compared to getting together in person.

The progressive congressional aide said the Sierra Club infighting that led to his departure was evident from the outside. “It caused so much internal churn that they stopped being engaged in any serious way at a really critical moment during Build Back Better,” the aide said. …

In the short term, the battles between staff and organizational leadership have effectively sidelined major progressive institutions at a critical moment in U.S. and world history. “We used to want to make the world a better place,” said one leader of a progressive organization. “Now we just make our organizations more miserable to work at.”

… It’s become hard to hire leaders of unmanageable organizations. A recent article in the Chronicle of Philanthropy noted that nonprofits were having an extraordinarily hard time finding new leaders amid unprecedented levels of departures among senior officials. …

Executive directors across the space said they too have tried to organize their hiring process to filter out the most disruptive potential staff. “I’m now at a point where the first thing I wonder about a job applicant is, ‘How likely is this person to blow up my organization from the inside?’” said one, echoing a refrain heard repeatedly during interviews for this story. …

Another leader said the strife has become so destructive that it feels like an op. “I’m not saying it’s a right-wing plot, because we are incredibly good at doing ourselves in, but — if you tried — you couldn’t conceive of a better right-wing plot to paralyze progressive leaders by catalyzing the existing culture where internal turmoil and microcampaigns are mistaken for strategic advancement of social impact for the millions of people depending on these organizations to stave off the crushing injustices coming our way,” said another longtime organization head. “Progressive leaders cannot do anything but fight inside the orgs, thereby rendering the orgs completely toothless for the external battles in play. … Everyone is scared, and fear creates the inaction that the right wing needs to succeed in cementing a deeply unpopular agenda.”

During the 2020 presidential campaign, as entry-level staffers for Sanders repeatedly agitated over internal dynamics, despite having already formed a staff union, the senator issued a directive to his campaign leadership: “Stop hiring activists.” Instead, Sanders implored, according to multiple campaign sources, the campaign should focus on bringing on people interested first and foremost in doing the job they’re hired to do.

Bernie Sanders’ next book should be: We Used To Have a Proper Country.

… The reckoning has coincided with an awakened and belated appreciation for diversity in the upper ranks of progressive organizations. The mid-2010s saw an influx of women into top roles for the first time, many of them white, followed more recently by a slew of Black and brown leaders at most major organizations. One compared the collision of the belated respect for Black leaders and the upswell of turmoil inside institutions with the “hollow prize” thesis. The most common example of the hollow prize is the victory in the 1970s and ’80s of Black mayors across the country, just as cities were being hollowed out and disempowered. …

Inner turmoil can often begin, the managers said, with performance-based disputes that spiral into moral questions. “I also see a pattern of … people who are not competent in their orgs getting ahead of the game by declaring that others have engaged in some kind of -ism, thereby triggering a process that protects them in that job while there’s an investigation or turmoil over it,” the foundation official added. Such disputes then trigger broader cultural conversations, with battle lines being drawn on each side.

… Beyond not producing incentives to function, foundations generally exacerbate the internal turmoil by reflexively siding with staff uprisings and encouraging endless concessions, said multiple executive directors who rely on foundation support. “It happens every time,” said one. “They’re afraid of their own staffs.”

Organizations that start out by making significant concessions to staff often get run over in short order, said multiple organization heads who watched the process unfold. “You see it on the micro scale too,” said one former executive director who plans to hunker down in the world of consulting for the next several years, “like when there’s an individual manager who gives up her or his power and just goes belly up and says, ‘Oh, yes, I have to apologize for thousands of years of oppression and I will never be able to make it up to you, but I will try.’ People will just roll all over them.”