The Latest Whitopia: the 1890s These are the Mast Brothers, two guys from Iowa who make extremely expensive "artisanal" chocolate in Brooklyn. And, yes, they do seem to go out of their way to look like the Smith Brothers on the old cough drop boxes. 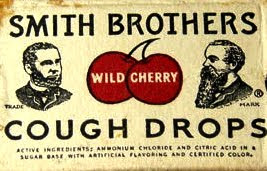 Here's Benjamin Wallace's witty article using the Mast Brothers to illustrate what's happening in Brooklyn. And here's their video about how they hand craft chocolate bars:

Now, I can't afford to buy $9 chocolate bars, and my taste buds aren't sophisticated enough to tempt me anyway, but I expect that a decade from now I'll buy something at Costco cheap and delicious that incorporates new flavor breakthroughs invented around now by all the artisanal food maniacs like the Mast Brothers who are currently holing up in Brooklyn, Portland, and other growing hipster whitopias.

Fred Armisen and Carrie Brownstein launched their fairly amusing sketch-com Portlandia (you'll like it if you don't let your expectations get too high) with a song about how the dream of the 1990s (e.g., grunge) is alive in Portland. It was okay, and you should watch it to get the jokes in this next song, because now they they've topped it with a reprise (via Razib) about how the dream of the 1890s is alive in Portland.

Remember when everybody was carving their own ice cubes?