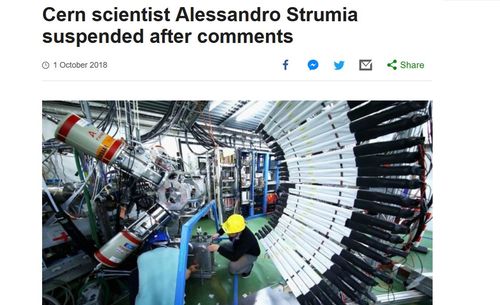 The James Damore of Cern Is Suspended

A senior scientist who said physics “was invented and built by men” has been suspended with immediate effect from working with the European nuclear research centre Cern.

Prof Alessandro Strumia, of Pisa University, made the comments during a presentation organised by the group.

He said, in comments first reported by the BBC's Pallab Ghosh, that physics was "becoming sexist against men".

Cern said on Monday it was suspending Prof Strumia pending an investigation.

It stated that his presentation was “unacceptable”. …

Prof Strumia, who regularly works at Cern, was speaking at a workshop in Geneva on gender and high energy physics.

He told his audience of young, predominantly female physicists that his results “proved” that “physics is not sexist against women. However the truth does not matter, because it is part of a political battle coming from outside”.

He produced a series of graphs which, he claimed, showed that women were hired over men whose research was cited more by other scientists in their publications, which is an indication of higher quality.

He also presented data that he claimed showed that male and female researchers were equally cited at the start of their careers but men scored progressively better as their careers progressed.

When the BBC contacted Prof Strumia he said: “People say that physics is sexist, physics is racist. I made some simple checks and discovered that it wasn’t, that it was becoming sexist against men and said so.”