The Guns of Singapore (Cont.)

As I've repeatedly noted, America has a huge data-collecting and data-interpreting infrastructure serving a political and media juggernaut designed to make sure that minorities get plenty of mortgages. In contrast, we have virtually no infrastructure to let us know whether minorities then pay back those mortgages.

Our system for making sure minorities get enough lending is like driving a car rigged up with a complex safety system that warns you loudly and incessantly to make sure you don't drift too far in your lane to the left, and that makes it hard to turn to the steering wheel to the left, but totally ignores any drifting you do to the right. Not surprisingly, you are eventually going to wind up in a ditch on the right.

So, social scientists are still debating last century's question: are minorities being discriminated against by lenders, while largely ignoring this century's big questions about minorities and mortgages. Here's a new study from economists at the New York Fed on the question that the media has been much more up in arms over: did minorities get charged higher interest rates?

A new study by economists at the New York Federal Reserve says "No."

Subprime Mortgage Pricing: The Impact of Race, Ethnicity, and Gender on the Cost of Borrowing Andrew Haughwout, Christopher Mayer, and Joseph Tracy

Some observers have argued that minority borrowers and neighborhoods were targeted for expensive credit in 2004-06, the peak period for subprime lending. To investigate this claim, we take advantage of a new data set that merges demographic information on subprime borrowers with information on the mortgages they took out. In a sample of more than 75,000 adjustable-rate mortgages, we find no evidence of adverse pricing by race, ethnicity, or gender in either the initial rate or the reset margin. Indeed, if any pricing differential exists, minority borrowers appear to pay slightly lower rates, as do those borrowers in Zip codes with a larger percentage of black or Hispanic residents or a higher unemployment rate. Mortgage rates are also lower in locations that previously had higher rates of house price appreciation. These results suggest some economies of scale in subprime lending. Yet there are important caveats: we are unable to measure points and fees at loan origination, and the data do not indicate whether borrowers might have qualified for less expensive conforming mortgages.

They looked at 75,000 subprime loans with 2-year teaser rates handed across the country out in August 2005 for which they were able to match the race/ethnicity info in the federal government's Home Mortgage Disclosure Act database with the expensive creditworthiness data from LoanPerformance, which is considered the gold standard of mortgage creditworthiness. With this breakthrough in data, they found:

"In contrast to previous findings, our results show that if anything, minority borrowers get slightly favorable terms, although the size of these effects are quite small."

Bloomberg reports on the study:

The authors said they were not able to determine whether minority borrowers were forced to pay higher upfront costs in points or fees, or whether the subprime borrowers might have qualified for less expensive conforming loans.

From what we know about car-buying — blacks tend to be poorer negotiators, perhaps because they don't want to look like cheapskates to the salesman, perhaps because they have less information — I would think it's inevitable that blacks and perhaps Hispanics would, on average, be more likely to get stuck with loan terms less favorable than, say, Armenians or Koreans would manage to extract.

On the other hand, there are vast government and NGO resources devoted to fighting discrimination against legally-protected minorities.

The popular argument that the heavy involvement of blacks and Hispanics in the subprime debacle is because they were discriminated against by being steered into subprime loans when they could have qualified for prime loans founders when you stop focusing exclusively on the inputs to the mortgage system and finally look at the outputs: default rates.

This prevalent theory is hard to reconcile with the facts of higher default rates among blacks and Hispanics.

Obviously, the gigantic default losses in heavily minority regions such as Southern California's Inland Empire (where about 9% of all defaulted dollars lost in the country went down the drain) suggest that subprime borrowers weren't charged enough interest to make up for the risk. But, we're not supposed to talk about that.

We know from the Boston Fed's recent study of subprime foreclosures in Massachusetts that foreclosure rates have long been significantly higher for blacks and Hispanics, at least in that state: 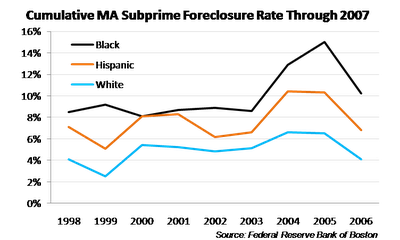 Similarly, FHA loans, which served, more conservatively, the least creditworthy, saw much higher default rates among blacks and Hispanics in the 1990s, when there wasn't a housing bubble, suggesting that we are dealing with a deeper pattern extending back before the recent housing follies.

So, either high quality black and Hispanic borrowers were being forced into the subprime category, as the conventional wisdom holds, which implies that blacks and Hispanics should have had lower default rates. Or, the NY Fed economists were right, and the system worked in a colorblind fashion, which should give us equal default rates among Non-Asian Minorities.

And yet, we still see higher default rates among NAMs.

What all this default data suggests is the opposite of the conventional wisdom: that colorblind systems of assessing creditworthiness tend to overestimate the creditworthiness of black and Hispanic applicants.

Another insight is the wisdom of anti-usury laws that set some sort of upper limit on interest rates. These can serve to prevent loans likely to go bad, which tend to impose widespread economic liabilities. Of course, in the giant push to get more lending to minorities from 1968 onward, these laws were in bad odor because they have a "disparate impact" — the tighter the caps on interest rates, the fewer minorities will get any loan.