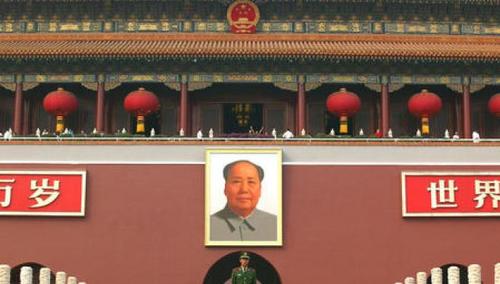 Spandrell reviews the mechanics of how Mao’s Cult of Personality emerged twice, once in later 1950s China, which led to the Great Leap Forward, backyard steel furnaces, the collectivization of agriculture, and 30 million starving to death. Then, after the Communist Party leadership sent Mao off to think about culture rather than economics, he returned in 1965 with the Cultural Revolution.

A key to the Cult of Personality was the high-pressure “struggle session” in which true believers browbeat doubters and whip the uncommitted up into a frenzy.

And this is the story of the great Chinese Leftist Singularity. Now that we have a detailed account of how it started, how it accelerated and how it exploded into complete madness; let us go back to the present, and take a good look.

Progressivism has been accelerating of late, all with global warming melting the poles every day now, women being able to accuse ex-boyfriends of rape months after the fact and without evidence, and the right of 60 year old ex-athletes to use the women’s bathroom being state policy. Failure to signal your approval for any of these developments will get you fired. And the higher the pressure of people to approve of present progressive tenets, the faster that newer, more radical tenets appear, and the more this happens the more demand it creates of rituals to convince people of the holiness of progressive ideals.

The threat of losing one’s job is more than enough to get people motivated to toe the progressive line. You can create a very high-pressure environment, and thus a faster moving leftist singularity without having to kill anyone. Which is an improvement, I guess. It does seem that the demand for effective progressive rituals isn’t being properly addressed, though. Liberals understand the demand, and have come up with mandatory Sensitivity Training in all government agencies and private companies; but they aren’t intense enough yet, and they patently haven’t succeeded in creating sufficient amounts of sincere belief; which drives liberals to denounce all the lukewarm Maoists who still don’t love blacks and trannies from the bottom of their heart.

Perhaps it can’t be done. Cults of personality are, if crazy, still quite natural given man’s religious nature. Worshipping a powerful man as a god has been quite common through history, and eventually morphing the old man’s image into a lucky charm to be put as paperwall to repel bad spirits is fairly standard in a cognitive sense. But getting people to love black people, who they actively avoid in their daily lives, to hate their own ethnic group, to hate straight men, to love fags, trannies, sluts and fatties; well that’s too much shit to take even for homo hypocritus. You can get some people, mostly natural status-whores into the plan, and you can get most people to say they love progressivism, and to not actively oppose it.

But getting people to pumped up in a high-pressure ritual to actually develop faith in the program; that can’t be very easy. At least for white men, who are the bad guys in the story. Which might account for the overrepresentation of Asians among SJWs these days; it’s less cognitively taxing for them to develop sincerity.

The sheer implausibility of progressive theology might account for the slow pace of the leftist singularity, compared to the Communist examples. But growing it is; and unless the government doesn’t stop the fear of reprisal; i.e. if people don’t stop getting fired for being insufficiently PC, progressivism will only get worse. Slowly, steadily worse.

Here are a couple of weaknesses in the current system that have retarded it’s drive toward Maoist-level mania.

First, the lack of a single Cult of Personality figure, a Big Brother, to worship. Modern American progressivism is polytheistic rather than monotheistic, so not even MLK can serve without ever increasing demands to add to the pantheons. Perhaps a leftist Hindu intellectual will someday work out how American Progressivism can achieve the emotional intensity of monotheistic totalitarian cults of personality like Maoism and Stalinism while still being sensitive to diversity.

What they try to do is to not have a single patriarchal Big Brother, just have an Emmanuel Goldstein hate symbol to unify around by hating cisgender straight white gentile males. But of course, humans are more inclined to want to follow a big, healthy, masculine, brave, straight guy like Mao than various representatives of the fringes. So a Mitt Romney-type doesn’t make a good Emmanuel Goldstein for two minutes hates because a Mitt-type would naturally make a better Big Brother.

I’m not sure what the Progressives will do to overcome this, since they can’t actually publicly discuss their problems. But never doubt the power of American entrepreneurialism to eventually come up with solutions to problems customers didn’t even realize they had.

Second, the current round of struggle sessions for political correctness appear to be pretty lame at arousing the masses. I’ve never sat through a Tim Wise lecture or attended Eddie Moore’s White Privilege conference, but they don’t sound all that emotionally galvanizing, except maybe to total dweebs.

I suspect, however, that bigger cult talents will eventually glom onto the Diversity conventional wisdom and turn it into something more barn-burning.

Consider, for example, the guys who for the last 45 years have been running Landmark or est or whatever they choose to call themselves at the moment. These guys are pretty competent at turning a religion of nothing into a moneymaking cult.

What car salesman Werner Erhard did to invent est was to start with Jean-Paul Sartre’s epochal October 1945 lecture “Existentialism Is a Humanism,” in which Sartre offered secular students of Continental Europe an idealistic-sounding alternative to Communism: God doesn’t exist, so you have to choose your own ideals. Then Erhard simplified existentialism into est for American corporate middle managers.

And est is still out there after all these years. For example, Canadian billionaire Chip Wilson, founder of the Lululemon yoga pants empire (who says his competitive advantage is that he’s the only man in women’s design who likes to look at women in really tight pants), paid for all his staffers to go to est-ish seminars.

By this point, everybody knows it’s kind of a cult and a scam, except … on some people these struggle session techniques really work, even when the surface existentialist ideology is that each individual is supposed to come up with his own values to live out. And yet all this apparent individuality seems to work fine at making Chip Wilson a billionaire.

It would take somebody pretty brilliant to adapt est struggle session techniques, which are nominally about individualism, to enforcing political correctness by igniting Maoist passions among Americans.

But I suspect somebody at some point will figure it out.

And then watch out.