The career of journalism is not one conducive to have your name go down in history. Most journalists are forgotten within a week of their last byline. Your best hope of being remembered might be to write for a periodical that happens to outlive you and thus has an interest in dredging up your name now and then.

Much of what we think we know about controversies of the past is filtered via this "survivorship bias." The current editors of The New Republic or The Nation or National Review or The Atlantic explain that the key intellectual breakthrough of the past age came in some article they happened to have published. But a huge amount of influential journalism was published in periodicals that aren't around anymore.

Having been an enthusiastic reader of opinion journalism going back to the late 1960s, it strikes me that much of our current pictures of what people thought back then is warped by which publications happened to endure. For example, when I began high school debate in 1972, one of the magazines that was most quoted as "evidence" was the liberal intellectual weekly, The Saturday Review of Literature. It was a huge presence in the national discourse, having something like 600,000 subscribers (trust me, that's a lot). And it had been a big magazine for decades. In fact, it was so big that various financial engineers tried to make a lot of money off it, which eventually led to its demise.

The Saturday Review's editor, Norman Cousins, ranked not far behind William F. Buckley as the most famous opinion magazine editor of the 1970s. Cousins even became a household name far beyond intellectual spheres when he published an article in the New England Journal of Medicine recounting how, when suffering an illness, he attempted to induce a placebo effect in himself by reading funny books and watching his favorite Marx Bros. movies.

When I had cancer in 1997, I more or less followed Cousins' advice. Many people try to heroically combine doing their jobs with undergoing chemotherapy, but with Cousins' theory in mind, I immediately went on disability and just did whatever I liked. I reread all Robert Heinlein's novels, took long walks along the Chicago lakefront, played golf, and carefully polished perhaps my best article Is Love Colorblind? And I slept 12 hours per day. (Nice work if you can get it.)

You can now find all 2,646 issues of The Saturday Review at Unz.org, along with over 100 other magazines. Ron Unz's trove of opinion journalism and the like is a great resource for historians and the historically-minded. You can search the Unz.org archive in Google just by starting a search with

When reading up on Norman Cousins, I saw this quote in his NYT obituary:

"That made it apparent to me that there was a new breed in America," he said, "people who were business executives, or in science, say, who were interested in ideas but not interested in intellectual cliques or literary gossip. I recognized that this was one of the most exciting intellectual developments of our times — but its manifestations hadn't been acted upon by those in the world of communications."

I suspect Cousins' had one particular business executive / scientist foremost in mind when he said that: Everette Lee DeGolyer, who owned The Saturday Review and bequeathed it to Cousins when he died in 1956. 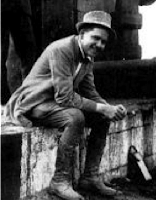 This picture of a young DeGolyer, tired and muddy but rightly happy, is my favorite in Daniel Yergin's monumental history of the oil industry, The Prize. The caption reads, "The geologist Everett Lee DeGolyer, sitting on a porch near Tampico after his discovery in 1910 of what became Mexico's Golden Lane. By 1921, Mexico was the world's largest oil producer." It's a great picture of the Enterprising Young American.

DeGolyer would be high on the list of Most Valuable Americans whom nobody these days has ever heard of. The oil industry is a massive contributor to the wealth of America, and DeGolyer contributed as much to the success of the American oil industry in the first half of the 20th Century as anybody. Yergin writes:

No man more singularly embodied the American oil industry and its far-flung development in the first half of the twentieth century than DeGolyer. Geologist — the most eminent of his day — entrepreneur, innovator, scholar, he had touched almost every aspect of significance in the industry. Born in a sod hut in Kansas ... while still an undergraduate, he took time time off to go to Mexico, where in 1910, he discovered the fabulous Portrero del Llano 4 well. ... It was the biggest oil well ever discovered ...

That was only the beginning. DeGolyer was more responsible than any other single person for the introduction of geophysics into oil exploration. He pioneered the development of the seismograph, one of the most important innovations in the history of the oil industry ...

He put together one big oil firm, Amerada, then started the premiere oil engineering consulting firm, DeGolyer and McNaughton. He made $2 million per year during the Depression. In 1943, FDR sent him on a top secret mission to Saudi Arabia to figure out how important that hunk of desert was. One of his staffers reported back, "The oil in this region is the greatest single prize in all history."

Eventually he grew bored with making money and gave a lot of it away. ... He was a founder of what became Texas Instruments. He was a considerable historian of chili. He built an extraordinary collection of books. He bailed out the Saturday Review of Literature when it was about to go bust, and became its chairman, though he never did care much for its politics.