The Flynn Effect of NFL Passing 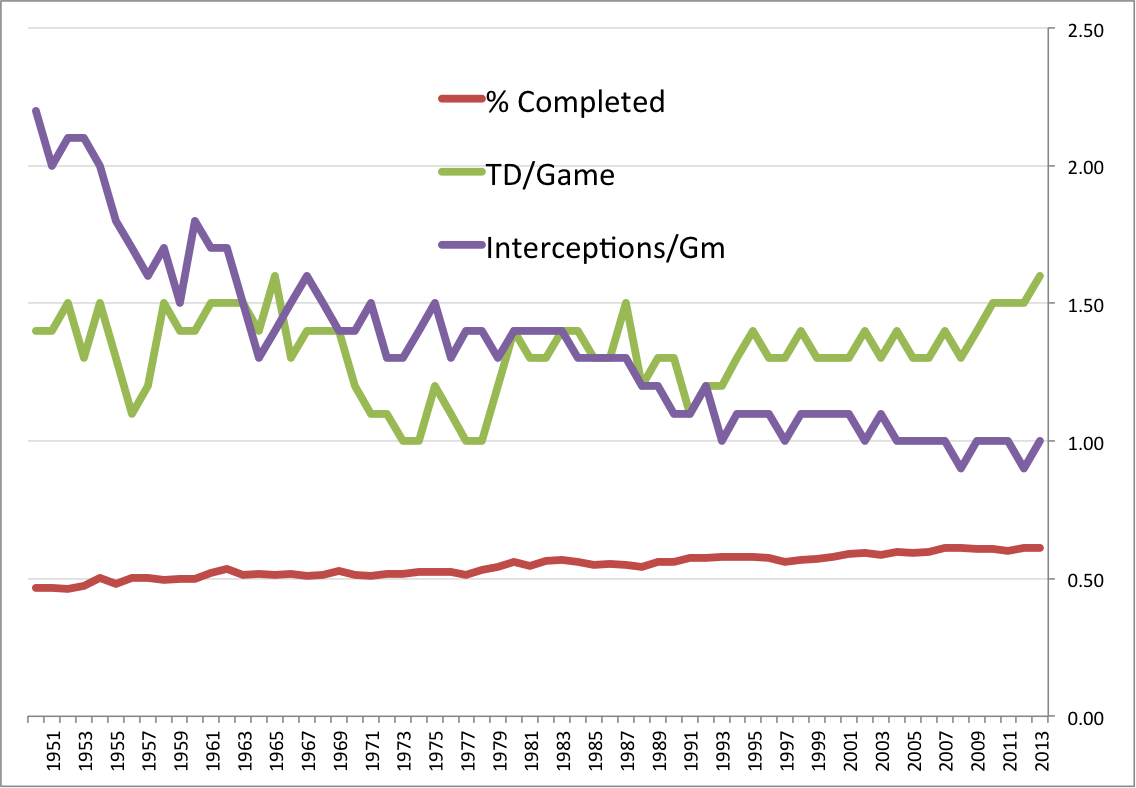 Over the years, NFL football teams have gotten visibly better at passing the ball. This graph shows NFL passing stats from 1950 to 2013. For example, the percentage of forward passes completed (red line) has improved from under 50% in the early 1950s to a record-tying 61.3% in 2013.

Or compare touchdown passes to interceptions. The average number of touchdown passes per team per game (green line) hadn't changed all that much, until shooting up the last few years, tying the record of 1.6 in 2013. Most notably, the number of intercepts surrendered per team per game (purple line) has dropped from over 2 to about 1 in recent years.

There are many reasons for this, such as changes in rules to preserve receivers and quarterbacks and improvements in game conditions (such as domed stadiums and better turf). It would appear, however, that NFL teams are just better at passing the ball than they used to be. Although defenses are evolving too, offenses make fewer unforced errors than they used to. Thus the big improvement in the touchdowns to interceptions ratio from the Broadway Joe Namath days when advanced offensive strategic thinking called for the QB to heave it deep and see what happens.

When you see "Flynn Effects" like that, it's interesting to try to determine whether the improvements come more from change in personnel or from change in how they perform.

For example, Bill Simmons notes in his big book of basketball a 1950s NBA center, a white guy listed at 6'8" whose name slips my mind (Neil Johnston?). He was a major scorer using a side arm hook shot. Then Bill Russell, a black guy listed at 6'11" arrived in the league and tried really hard on defense. (The NBA has always had a professional wrestling side to it, so trying hard to win on defense was a novelty in the pro game.) Russell blocked so many of his sidearm shots that he was soon out of the league.

In general, though, it's not that easy to find all that many clear examples in sports history of players' careers being shortened by the overall quality of competition in the league going up. One inflection point might be when Maury Wills stole 104 bases for the Los Angeles Dodgers in 1962: that is said to have had a big impact on the careers of catchers in the National League: the good hit / no throw ones were gone pretty fast.

But you also get a lot of examples of star players who just keep racking up bigger numbers as the game evolves. Manning, for instance, is 37 and can't throw the ball very hard anymore. He has to throw many of his passes at an arc, which ought to give the defense more time to break them up. Since entering the NFL in the last century, he has heard quite a few other quarterbacks proclaimed The Future of Football.

But this season Manning set records for most yards passing and most touchdowns in one season, and threw for 400 yards on Sunday to go to the Super Bowl.