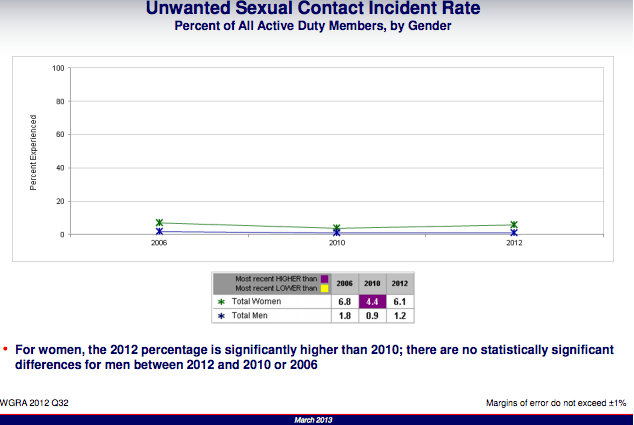 The Epidemic of Rape in the Military (Which Isn't)

The media is currently worked up over the Epidemic of Rape in the Military. For example, here's a representative op-ed in the NYT:

LOS ANGELES — THE Senate Armed Services Committee will hold a hearing today on sexual assault in the military. This comes after months of revelations of rapes and other violent attacks at military bases and academies. ...

The military has a problem with embedded, serial sexual predators. According to a 2011 report from the Pentagon’s Sexual Assault and Prevention Office, 90 percent of military rapes are committed by men with previous histories of assault. These predators select and befriend lower-ranking victims; often they ply their victims with alcohol or drugs and assault them when they are unconscious.

In my film “The Invisible War,” a retired brigadier general, Loree K. Sutton, describes the military as a “target-rich environment” for serial predators. The training and leadership efforts the Pentagon proposes won’t change this environment. It simply isn’t possible to “train” or “lead” serial predators not to rape.

There is a way to stop these predators: we should prosecute and incarcerate them. But here the military fails entirely.

Though the Defense Department estimates that there were 26,000 sexual assaults in the military last year, fewer than 1 percent resulted in a court-martial conviction.

Oh ... wait a minute ... the 26,000 figure, a projection from a survey, isn't for "rape." The author suddenly switched from talking about "rape" to talking about "sexual assault," which is ... well, what exactly?

Here's the Army's FAQ on the subject, but it's not all that illuminating, either. It's bereft of concrete examples of what is and isn't "sexual assault." The Army defines "sexual assault" as "intentional sexual contact," but no examples are given. Is, say, a pat on the butt sexual assault? Is playing footsie sexual assault?

This murkiness is not unique to this latest sex scandal. It's not a bug, it's a feature when lawyers enlist the media in helping them target a deep-pocketed institution.

In lawyer-driven sex-scandals, it's not uncommon for crisp sounding abstractions to mask a lot of murkiness. For example, in the endless, and highly lucrative, Catholic priest scandals, picture in your head a representative example of a sexual act perpetrated by a Catholic priest. My guess is that the most likely example that comes to mind is Gerry Sandusky in the shower with the 10 year old boy.

And yet, Gerry Sandusky wasn't at all a priest, he was the retired linebacker coach at Linebacker U., Penn State. But, the Sandusky example comes readily to mind in relation to the priest scandals because we've been told over and over and over exactly what Sandusky did. Why? Because it's so horrifying.

In contrast, the media (and the plaintiff's attorneys who package much of what appeared in the media) were seldom in as much of a hurry to tells us about exactly what all those Catholic priests tended to be doing over the years. When you look into what actually happened, it seldom turns out to be all that Sandusky-like: instead, creepy and disgusting, but seldom brutal.

After all, the priests in these scandals were seldom America's most famous linebacker coach. Instead, they tended to be gentle, gay, lonely alcoholics who had taken a personal interest in some youth (youths, not children, typically past puberty — the priests were far more often gay than pedophiliac), a personal interest that went too far. (See John Patrick Shanley's play Doubt.)

Back to the Epidemic of Military Rape.

Finally, reading through the military's report on the survey where the endlessly-cited 26,000 number of "sexual assaults" comes from, I find an example:

So, if I'm reading this right, the pat on the butt would be sexual assault, but footsie would not. Or maybe not. It doesn't seem to be in the interest of anybody important to clear up confusion.

Here's the official graph of the Rape Epidemic: 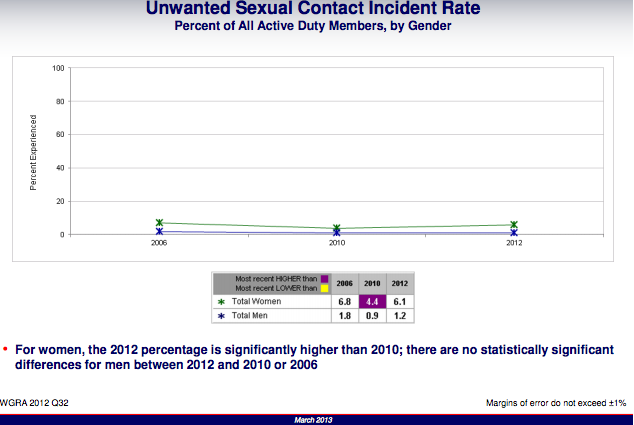 In a related story, as part of the media campaign, from the NYT:

ANNAPOLIS, Md. — As midshipmen were graduating from the Naval Academy here last week, Navy investigators were conducting an investigation into reports that several football players had serially raped a female midshipman at an off-campus party last year. ...

The investigation, stemming from an April 2012 party, has sputtered off and on for more than a year, hampered in part by the woman’s initial refusal to cooperate, the officials said. She was ashamed and then later felt intimidated, according to her Washington lawyer, Susan Burke. In a series of interviews, the female midshipman said that she was upset that she had faced disciplinary action for under-age drinking at the party while the football players were permitted to play last season.

... Academy officials said that the players were allowed to play for the team last fall because no charges had been brought in the case and they were accorded the presumption of innocence as a result. ...

The inquiry comes amid a growing national controversy over sexual assaults in the military — and over whether he Pentagon has reacted aggressively enough to curb them. The controversy has now reached into the cloistered world of the elite service academies.

... On April 14, 2012, the woman said, she went to a crowded off-campus party hosted by a group of football players. It was held at an Annapolis home known as “the football house.” In interviews, several midshipmen who attended the party said it was one of several houses used by members of the academy athletic teams, in violation of rules prohibiting midshipmen from having off-campus housing in the Annapolis area.

The woman, then a third-class midshipman, or sophomore, said she drank heavily before the party and was intoxicated by the time she arrived at the football house. She said she drank more after she got there and began to black out.

She said she could recall only brief moments of that night. ...

Later that night, Ms. Tisdale told her friend that rumors were flying around campus that several football players had had sex with her at the party.

...Still worried about the backlash, she was not fully cooperative once an investigation was begun by the Naval Criminal Investigative Service. “I told them I chose to drink, it was my fault, and I couldn’t remember,” she recalled. “The N.C.I.S. agent told me, ‘Just because you were drinking doesn’t give them the right.’ ”

... She also hired Ms. Burke, who says she began meeting with Navy investigators as well.

In cooperating with the investigators, the victim agreed to secretly record conversations with some of the football players, including one by telephone the day before President Obama came to deliver his graduation address at the Naval Academy last Friday, she said.

Since nobody remembers anything these days, not surprisingly, nobody has brought up in relation to this case what Naval Academy professor Bruce Fleming wrote in an NYT op-ed on 5/20/2010:

Meanwhile, the academy’s former pursuit of excellence seems to have been pushed aside by the all-consuming desire to beat Notre Dame at football (as Navy did last year). To keep our teams in the top divisions of the National Collegiate Athletic Association, we fill officer-candidate slots with students who have been recruited primarily for their skills at big-time sports. ...

It’s no surprise that recruited athletes have been at the center of recent scandals, including a linebacker who was convicted of indecent assault on a female midshipman in 2007 and a quarterback who was accused of rape and dismissed from the academy for sexual misconduct in 2006. Sports stars are flattered on campus, avoid many of the onerous duties other midshipmen must perform, and know they’re not going to be thrown out. Instead of zero tolerance, we now push for zero attrition: we “remediate” honor code offenses.

Another program that is placing strain on the academies is an unofficial affirmative-action preference in admissions.

In the early 1960s, Heisman Trophy winner Roger Staubach almost single-handedly carried to Navy to a national title bowl game, but after that the Navy football team seldom qualified for post-season bowls? Why? Staubach had to spend four years as a naval officer. On his 31st birthday, Staubach had so far only started 14 NFL games in his life (and yet he still went on to wrack up one of the great careers in NFL history.) So, other high potential athletes shunned the military academy to avoid the 4 year post-graduation commitment

The easiest way that rigorous colleges get better at football is by letting in more marginal characters. One little discussed side effect is that the number of co-eds getting raped tends to go up along with the win totals.