The Déformation Professionnelle Of Jewish Organizations On Immigration

This 2010 article from The Jewish Week isn't new, but it's important.

Some wonder if American Jewry’s traditional empathy for all newcomers could be waning.

One of the rare issues on which nearly all mainstream Jewish organizations agree — and on which they’ve always believed they had the backing of most American Jews — involves how the United States should treat immigrants, including those who are undocumented.

More than a dozen national agencies, including the congregational arms of all four major branches of Judaism, have publicly announced their support for comprehensive immigration reform, which would go beyond an enforcement-only policy to offer unauthorized residents “a path to citizenship.”

But this week some Jewish leaders are beginning to wonder if American Jewry’s traditional empathy for all newcomers is now waning.

Their concern follows the Oct. 12 release of a survey by the American Jewish Committee that asked respondents if they supported or opposed Arizona’s controversial new law on illegal immigration. Fifty-two percent of the 800 respondents said they supported the law, while 46 percent opposed the measure and 2 percent said they weren’t sure.

“It’s a reminder that Jews are part of America and are influenced by some of the same currents that influence other Americans,” said Jonathan Sarna, a professor of American Jewish history at Brandeis University. At the same time, he noted that the 52-percent figure remains lower than the 65 percent of Americans, overall, who’ve told pollsters they favor the law.

The query was among 29 questions in a survey that focused largely on the Obama administration, the Israeli-Palestinian conflict and the upcoming midterm elections. But it touched on a subject that has a special resonance for American Jews, confusing and dismaying some Jewish leaders because of the result.

“That one took us by surprise,” said David Harris, AJC’s executive director.

Noting that the result seems “to defy conventional wisdom” about the Jewish commitment to progressive social policy, Harris said he couldn’t explain, but could only guess, why respondents answered as they did.

“When Americans, including Jews, see the words ‘illegal immigration,’ that helps define their answer,” he said, referring to a term used in the question. “But we don’t have enough data to tease that out, and we didn’t expect it.”

Another AJC leader close to the issue also seemed taken aback by the result.

“When I first heard about this, my first thought was, ‘Why this question?’” said Ann Schaffer, director of the organization’s Belfer Center for American Pluralism, who wasn’t alone among her colleagues in wondering why the question was asked.

“I don’t know if we know what to make of this,” Schaffer said.

As Harris suggested, one explanation for the result may rest with how the question is worded: “A new law in Arizona gives police the power to ask people they’ve stopped to verify their residency status,” it begins, simply enough. “Supporters say this will help crack down on illegal immigration. Opponents say it could violate civil rights and lead to racial profiling. On balance, do you support or oppose this law?”

“‘Racial profiling’ is not a term that people understand, but they do know that something illegal is wrong,” said Sammie Moshenberg, director of Washington operations for the National Council of Jewish Women.

In other words, according to professional Jewish Leaders, the people they claim to lead are complete morons who can't understand simple questions and are manipulated by wily media experts who use inflammatory terms like "illegal immigration." (Of course, the rest of the question is loaded with the hot button phrases "racial profiling" and the holy of holies of righteous indignation-generation: "violate civil rights.")

Are American Jews as dumb as their paid leaders insist they must be for engaging in crimethink on immigration? Razib recently went through the General Social Survey's 10 question vocabulary quiz for various groups. On most graphs, you get most groups having bell curves centering around getting six out of ten words right, with rapid falloffs above that. The religion graph, however, really stood out: 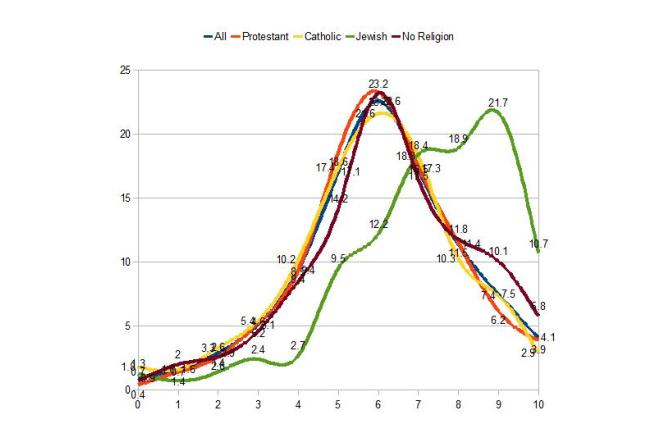 Granted, the Jewish advantage wouldn't be quite as huge if the other religions were restricted to just their white members, but still ...

So, the data suggests that average American Jews are relatively good at reading the newspaper.

And their views on immigration are closer to those of their fellow citizens than to the groupthink of their self-proclaimed leaders.

All that is nonsense to Stephen Steinlight, the lone figure who has advocated an anti-immigration stance in talks to Jewish groups and in the op-ed pages of Jewish newspapers.

“What we’ve found is a gigantic gulf between the pulpit and the pew [on the issue], and this is true of every religion in America, including Jews,” said Steinlight, a senior policy analyst at the Center for Immigration Studies and a former staff member at the U.S. Holocaust Memorial Museum and AJC. “Not only is it a slam dunk that Americans don’t support illegal immigration or amnesty, but Jews are no different.”

Steinlight’s contention is that illegal immigrants are taking jobs away from Americans during tough economic times, and their presence only benefits large companies looking for cheap labor.

“When Jews talk about tikkun olam [repairing the world], they have to ask themselves a question: Tikkun olam for whom? The illegal immigrant who entered the country last night or their struggling neighbor?”

Obviously, Ken Jacobson makes his living by goading Jews to feel "overwhelmed demographically" by white gentiles. But the reality is that typical American Jews don't feel all that overwhelmed. Their view tends to be that America has been very, very good to them and that they've been good to America. They tend to identify with their neighbors, their fellow American citizens, their fellow whites, their fellow "historic Americans," white and black (e.g., Willie Mays is a hero to a lot of older Jewish guys), and so forth and so on. But, this healthy state of affairs is bad for the balance sheets of a few powerful organizations.

All this suggests that that fundamentalist frenzy of Ellis Island kitsch ethnocentrism that currently dominates acceptable thought about immigration has less to do with average Jewish-American citizens than it has to do with the déformation professionnelle of the leaders of explicitly Jewish organizations, of organizations such as the SPLC that are implicitly Jewish because, as Willie Sutton said about why he robbed banks, that's where the money is; and the media types who interact with them.

Hence, the key to understanding many of the reigning irrationalities in American thought is to understand that déformation professionnelle. Since those interest groups have declared themselves off-limits to critical analysis (literally, in the very name of the ADL), however, don't expect anybody to learn anything.