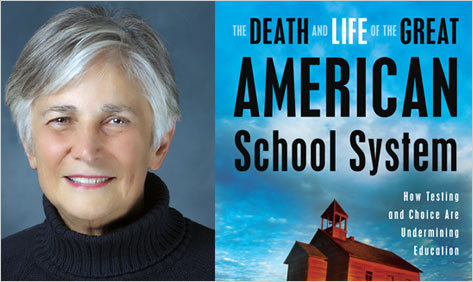 "The Death and Life of the Great American School System"

In Slate, Sara Mosle offers an interesting review of veteran neoconservative education guru Diane Ravitch's new book, in which Ravitch admits that she was naive about how to fix schools:

[Ravitch] argues that if we think the data hold the answer, we're indulging in wishful thinking, and her case should be enough to unsettle the best and the brightest as they take their turn at reform. Teacher quality, recruitment, and retention have become the new frontlines of this reform, spurred in part by powerful computer programs that can now mine mountains of data with relative ease. Ravitch focuses on the analyses of William Sanders, then a statistician at the University of Tennessee, whose previous work was in agriculture, manufacturing, and engineering. Drawing on past studies rather than on visits to classrooms, he decided that the single most important variable affecting students' performance is their teacher. (This is contrary to much research that suggests levels of poverty, health, parental education, and peer influences have equal or greater impact.) Since teachers' abilities vary widely, Sanders developed models for performing what is known as "value-added assessments"–that is, determining how much specific teachers boost achievement (based on test scores) for specific students over time.

Enter Stanford economists Eric Hanuchek and Steven Rivkin, whose further explorations Ravitch scrutinizes. They looked at how different variables–certification, general education level, salary–affected teacher quality. Nothing, in their judgment, was predictive. "A good teacher," they concluded, "would be one who consistently obtained high learning growth from students, while a poor teacher would be one who consistently produced low learning growth." So schools, they argued, should just open the profession to anyone and see who sinks or swim. They offered a tidy formula for how swimmers could be saviors: If a student had a teacher in the 85th percentile of teachers for five years in a row, they calculated, this would be enough to eliminate the persistent "achievement gap" between low-income and high-income students–the still-elusive grail of reform.

Hanuchek and Rivkin understandably want to improve the quality of instruction in impoverished schools, which undeniably can become repositories for the worst teachers. What Ravitch doubts is that this intervention all by itself can realistically promise to turn around failing schools in such extraordinary fashion, without any attention to other variables that affect student outcomes. And as a practical matter, she asks, how are schools–especially in inner-city neighborhoods–supposed to attract these large stables of consistent superstars? As Ravitch writes, "This is akin to saying baseball teams should consist only of players who hit over .300 and pitchers who win at least 20 games every season; after all, such players exist, so why should not such teams exist." The model also assumes yearly gains are cumulative, when most studies show that students (particularly low-income students) backslide substantially during summer months. At the very least, such an intervention would likely need to be coupled with efforts to extend the school day and school year.

But perhaps most damning, Ravitch writes:

No school or school district or state anywhere in the nation had ever proved the theory correct. Nowhere was there a real-life demonstration in which a district had identified a top quintile of teachers, assigned low-performing students to their classes, and improved the test-scores of low-performing students so dramatically in three, four or five years that the black-white test score gap closed.

Yet suddenly this one theory is driving reform. ...

The dirty dark secret of NCLB is that we may know how to identify the worst performing schools, but no one (yet) knows how to turn them around in any consistent and reliable way. And I mean no one. Not the Gates Foundation to date. Not most charter programs. No one.As one study Ravitch cites concludes: "The only guaranteed strategy [for improving schools] is to change the student population, replacing low-performing students with higher-performing students." And this is, in fact, what the rare success stories–like KIPP–typically do: skim off the best and most motivated students from disadvantaged neighborhoods. These best students deserve better options, but this approach doesn't address the larger problem of how to fix chronically failing schools.