THE CULTURE OF AI: The Automated Life of the Future Is Considered

Below is an excerpt from a new book, The Culture of AI, Everyday Life and the Digital Revolution. Unlike most books now available about the coming technological transformation, it is written by a sociologist rather than a Silicon Valley type. So it may address the cultural effects that arise from automation and smart machines taking a bigger place in the workplace and society generally.

The enormous changes about to descend upon the modern world should be considered more carefully by political leaders in Washington who now seem mostly asleep. America’s jobs economy is booming now, but tech experts think that a more widespread use of robots, automation and artificial intelligence is coming in a few years.

It’s likely that the US won’t need an extra million low-skilled Hondurans (which is current rate of inflow through America’s open border, more or less) in a decade or so when the smart machines become less expensive to hire than even the cheapest illegal alien.

Robotics and jobs: Where do we stand?, The Adelaide Review, By Anthony Elliott, March 25, 2019

With the AI-powered workplace of tomorrow arriving sooner than expected, what does this mean for us? 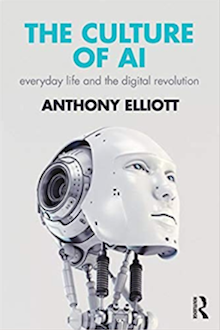 The debate about robotics on the future economy and job market is one divided squarely between transformationalists and sceptics, but that debate has in fact been increasingly undermined by the dynamics of AI and its relentless acceleration. Recent evidence indicates that robotics and AI are heavily impacting the economy, destroying low-wage jobs and increasingly eating away at higher-skill occupations as people are increasingly replaced by intelligent algorithms. There is evidence that the workplace of tomorrow, powered by AI and accelerating digital technology, is about to arrive much sooner than anticipated by many analysts.

A 2017 report from the World Economic Forum estimates the net loss of over 5 million jobs across 15 developed countries by 2020. Another report, published by the International Labor Organization, predicts that over 137 million workers in the Philippines, Thailand, Vietnam, Indonesia and Cambodia are likely to be replaced by robots in the near future. Moreover, as this tipping point in robotic job deployment is reached, advancing technology is driving many developed economies towards higher inequality. The global digital economy is generating more monopolies and resulting in greater income gaps between rich and poor, with many workers ending up unemployed and many highly skilled professionals increasing their wealth.

Columbia University economist Jeffrey Sachs has explored the stunning historical impact of machines in reducing the overall burden of work, and also their adverse distributional consequences on wealth. Drawing on US census data, Sachs notes that, whilst agricultural workers comprised 36% of the American labor force in 1900, they made up less than 1% of the labor market in 2015.

There has also been a sharp decline in the numbers of production workers (those working in mining, construction and manufacturing), from 24% in 1900 to 14% in 2015 of the US labor force. For Sachs, mechanization and machines lie at the core of the global shift from rural to urban life.

“Machines”, writes Sachs, “have dramatically eased the toil of most Americans and extended our lives, in stark contrast to the hard, long toil and lower life expectancies that continue for hundreds of millions of people around the world who are still trapped in subsistence agriculture”. Sachs argues that there is a clear disconnect between ongoing labor productivity growth and wages, which is leading to a decline in the share of labor in national income, and one principal reason for this is the displacement of workers by robots and smart machines. Workers most impacted by the astonishing growth in automation, according to Sachs, are those in jobs which are repetitive, predictable, and requiring only low to moderate levels of expertise.

But automation as a system should not be held to involve the progressive displacement of employment in toto. Sceptics have been quick to caution that robots cannot (at least as yet) reprogram or service their own operations. This point is often made by sceptics to underscore that technological innovation creates new, high-skilled jobs. The argument is that robotic automation, in fact, generates job creation for technicians, computer programmers and other newly generated digital workers. But the evidence for this claim looks increasingly brittle. Futurist Martin Ford convincingly shows that the US economy, for instance, has become progressively less effective at creating new jobs. This is largely because disruptive technological shifts are driving people out of the labor force. Most significantly, recent evidence demonstrates that every new robot entering the workplace leads to at least six job losses.

So, are massive layoffs and entrenched unemployment the way of the future as intelligent algorithms increasingly appear on the workplace frontier? Many argue so. But supercomputers, big data, automated technology and advanced robotics can already perform many different kinds of jobs. We must acknowledge that robots are already displacing and replacing jobs, however important the debate over digital upscaling and educational retraining might be.

The vision of a jobless future, and social futures more generally in which robots “unpeople” societies, is today far more commonplace than some years ago. One reason is that, in current economic circumstances, sophisticated machines are fast outpacing jobs and the large bulk of data indicates that AI will continue to substitute jobs with technological automation. Another is that public opinion largely sides with the notion of robots replacing people rather than augmenting skills and thus facilitating people to do things which they could not otherwise do. In other words, AI erodes rather than bolsters talent. A third reason, perhaps the most significant, is what I have called the illusion of new individualism.

In the era of AI and pervasive digital technologies, jobs have become increasingly changeable and multifaceted. The consequences for employees are that new jobs require different skills from those required in the recent past, and many average workers engaged in routine, predictable forms of employment do not have those skills. As a result, many economists, policy think-tanks and politicians have called for improving education (especially the development and deepening of digital literacy) and retraining opportunities.

In this new individualist scenario, workers of the future will be highly adaptable, endlessly pliable, effortlessly juggling both technological and social demands, and continually keeping up-to-date with new digital skills. A faith in self-fashioning, reinvention, reflexivity, the power of lifelong learning – all this, whilst undoubtedly in tune with the ecosystems of Industry 4.0 and global digital transformations, also denotes a distinctively Western culture of individualism and the ethos of advanced globalization. This is an activist account of human skills, in which the singular individual undertakes a kind of relentless self-fashioning new individualism in order to update their talent for jobs of the moment.

However, the truth, at least for millions of average workers around the globe, is that technology often results in a significant deskilling effect. The automation of many lower-skilled jobs has not necessarily produced more opportunities for advancing education levels or retraining, and recent evidence indicates that the idea of continuous retraining is optimistic at best.