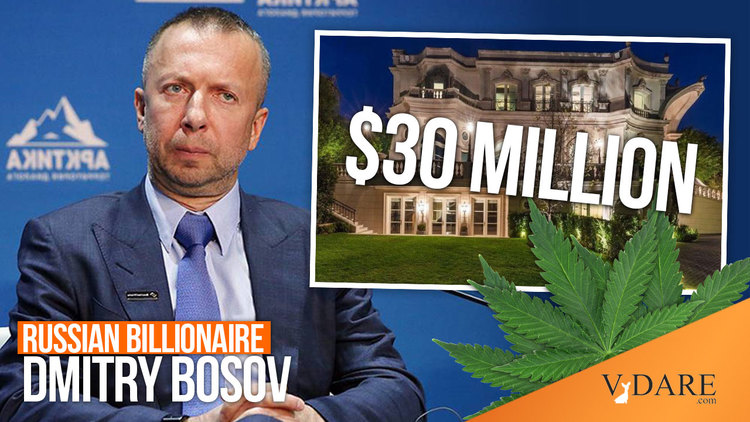 The Beverly Hills Russians: How Can They Afford That?

While writing my Taki’s column “Putin’s Best-Laid Plans,” I was looking around for an example of Russian and/or Ukrainian money pouring into the Hollywood Hills, and came up with this Beverly Hills house bought in late 2019 by Siberian Anthracite coal magnate Dmitry Bosov for $30 million, $19 million over list price. And it’s only 15,000 square feet. Going back, I see now that there’s more to the story. That’s a good rule of thumb: The honest answer to the question, “How can they afford that?” usually begins with, “Funny you should ask. There’s an interesting story behind that.”

The Oligarch and the Marijuana Fund

Dima Bosov brought millions of dollars from Russia to California, thinking the emerging cannabis industry would be a safe bet for easy money. He was wrong.
By MARY JANE GIBSON
AUGUST 23, 2021

Dmitry “Dima” Bosov seemed relaxed at his compound in the Mexican resort town of Cabo San Lucas. The Russian billionaire was clad in Rainbow sandals and a RipnDip T-shirt as he greeted executives from his latest venture, a cannabis company called Genius Fund. Heavy security patrolled the property’s perimeter, belying the Russian oligarch’s laid-back demeanor. “There were ten dudes with assault rifles around an Olympic-sized infinity pool,” recalls one employee who was there to give a presentation to Bosov and other Genius execs. “Like a mini militia.”

My dad’s favorite grocery store in Valley Village, CA was full of guys shopping who looked like they’d helped flatten Grozny in 1999.

It was December 2019, and Bosov had summoned his team to the resort to reorganize the leadership of the company he’d financed with over $160 million of his fortune. Started in 2018, Genius Fund had been envisioned as a vertically integrated cannabis company that would own its supply chain, creating products to sell at its own dispensaries.

Bosov was the sole investor in Genius Fund, which had launched the previous fall under the leadership of two young tech entrepreneurs, Ari Stiegler and Gabriel Borden, who told Bosov they could help him build a weed empire in California. …

… Dmitry Bosov was another uber-wealthy Russian seeking investment opportunities in the U.S. … He built his fortune in Russian aluminum and coal-mining the bloody “aluminum wars”

The Aluminum Wars sounds like a good title for an H.G. Wells sci-fi story.

under the Boris Yeltsin administration in the 1990s, mainly through his ownership of Sibanthracite Group, a Siberian conglomerate that claims to be the largest producer of metallurgical coal in Russia, and the world’s leading exporter of ultra high-grade anthracite, or “black diamond” coal. …

Bosov landed on the Forbes “Billionaires List” for the first time in 2020 with an estimated $1.1 billion net worth.

The 52-year-old, thrice-married father of five reportedly played ice hockey with Vladimir Putin and was a main sponsor of Putin’s amateur Night Hockey League, which brings together some of Russia’s most powerful and influential figures to hobnob on ice. He is rumored to have done business with his friend Mikhail Abyzov, a former Russian cabinet minister who was arrested in 2019 for allegedly embezzling about $61 million from a Siberian energy distribution company. (He has pleaded not guilty; the case is ongoing.) At the time of his death, Bosov was set to testify against an ex-partner named Anatoly Bykov, who was arrested for allegedly ordering contract hits on his enemies.

So, Ole King Coal Bosov hires a couple of California stoner cryptocurrency guys — Steigler and Borden — to build him a legal weed empire in West Hollywood, because why not?

Neither Stiegler nor Borden had any experience in the cannabis industry, but Stiegler’s former colleague says he constantly talked about it. “I don’t think he was a ‘weed guy,’ but he was definitely into the cannabis opportunities,” he says. …

Like so many with outlandish dreams, Bosov uprooted his life and moved to Los Angeles. He bought an opulent 15,000 square foot Beverly Hills mansion for $30 million (real estate website Dirt.com described it as “a decent impersonation of a baroque cathedral”) and moved in with his wife Katerina and their toddler daughter. Katerina, who has been labeled a fashionista in the press, graduated from Kutafin Moscow State Law University with a law degree and was the commercial director at Sibanthracite Group, where she was responsible for the company’s sales and logistics.

… Genius Fund grew quickly as Stiegler and Borden hired employees from well-known cannabis companies, along with friends and associates of theirs from college, many of whom had no experience in the weed industry. Salaries and perks were lavish, former employees say.

… During the early days of the startup, with millions in investor funds, Genius execs lived like rock stars, employees say. Bosov frequently summoned Stiegler and Borden to meet him in the seaside resort towns of Forte Dei Marmi in Italy, and Cabo San Lucas, at the compound one former staffer describes as James Bond-esque. “It was insane,” he says. “Theatrical. You’re like, what? This type of living exists?”

And of course they had to hire a whole bunch of ex-military types, although in this case they were ex-US military.

In April of 2019, the company hired Francis J. Racioppi, Jr. as chief security officer. Racioppi, a former U.S. Special Forces officer, was a straight-laced ex-military man, and an odd fit for a cannabis industry job, says a former Genius Fund consultant: “Fran was straight up like any movie you’ve ever seen where they secure the perimeter. Standing at attention, flat-top.” Other employees describe the tall, square-jawed Racioppi as intimidating and standoffish. However, his special forces background appealed to Stiegler, who gave Racioppi a base salary of $350,000 and hiring authority. Why Genius Fund hired Racioppi is unclear.

… In January 2020, the Melrose Avenue store was robbed after the security guard left for the night, despite having foiled two attempts earlier in the evening. “How do you have military people and get robbed?” an insider with knowledge of the events asks. …

As the coronavirus pandemic spread across the United States in March 2020, most cannabis businesses were declared essential, along with grocery and liquor stores. Even so, Genius Fund shut down on March 26th when Shinder issued a directive firing all existing staff, purportedly because Covid-19 had disrupted business.

… As the coronavirus pandemic began to spread across Europe, a nervous Bosov sequestered himself in his Moscow apartment, telling friends to “stay home or die,” the Daily Mail reported. He kept a gun with him during lockdown, believing the pandemic would lead to rampant crime, and fearing home intrusion.

On May 6th, Bosov’s wife Katerina found him dead in his home gymnasium, with a gunshot wound to the head. A Glock pistol was found next to his body. Russian officials investigated his death as a suicide or accident, but two of Bosov’s adult sons from a previous marriage have alleged foul play. Speaking to Forbes Russia, Bosov’s father Boris said, “The majority of family members… confidently believe that there was a murder, not a suicide.” …

The big-money dream of the weed empire that Ari Stiegler and Gabriel Borden promised they would build is now in ashes, and $164 million later, Genius Fund is all but defunct.