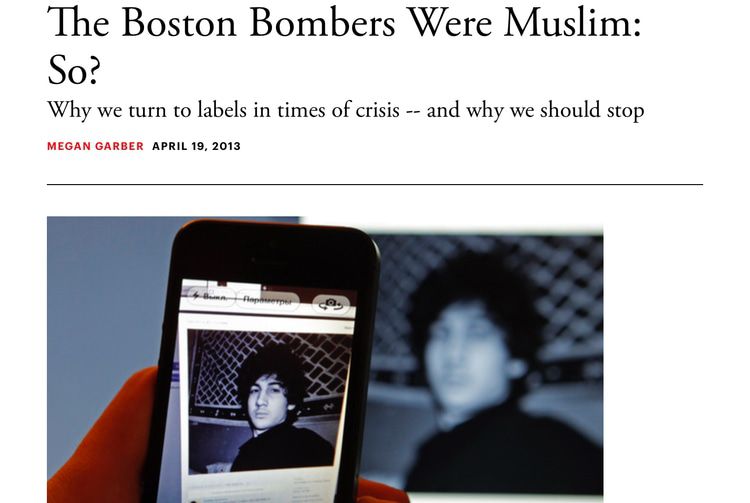 The ATLANTIC: American Stereotyping Of Muslims And Chechens Prolongs Terrorism

A central theme of my work is that the contemporary liberal worldview is pro-ignorance.

The Boston Bombers Were Muslim: So?

Here is what we know — or what we think we know — about Tamerlan Tsarnaev: He was a boxer and a "gifted athlete." He did not smoke or drink — "God said no alcohol" — and didn't take his shirt off in public "so girls don't get bad ideas."  He was "very religious." He had a girlfriend who was half-Portuguese and half-Italian. In 2009, he was arrested after allegedly assaulting his girlfriend. He was "a nice guy." He was also a "cocky guy." He was also a "a normal guy." He loved the movie Borat. He wanted to become an engineer, but his first love was music: He studied it in school, playing the piano and the violin. He didn't have American friends, he said — "I don't understand them" — but he also professed to appreciate the U.S. ("America has a lot of jobs .... You have a chance to make money here if you are willing to work"). He was training, as a boxer, to represent the U.S. in the Olympics.

We know, or we think we do, that Tamerlan's brother, Dzhokar, is "very quiet." Having graduated from the Cambridge Rindge and Latin School — a public school known for its diverse student body — he received a scholarship from the City of Cambridge. He went to his prom, with a date and in a tux. He had friends. He posed with them, smiling, at graduation. He tweeted pictures of cats. He skateboarded around his Cambridge neighborhood. His personal priorities, he has said, are "career and money." He is a second-year medical student at UMass Dartmouth. He is seemingly Chechan by birth and Muslim by religion, and has lived in the U.S. since 2002. He is "a true angel." He has uncles in Maryland. He called one of them yesterday and said, "Forgive me."

In times like this, we tend to emphasize adjectives rather than verbs.

These are provisional facts. They are the products of the chaos of breaking news, and may well also be the products of people who stretch the truth — or break it — in order to play a role in the mayhem. They are very much subject to change. But they are also reminders of something it's so easy to forget right now, especially for the many, many members of the media — professional and otherwise — who currently find themselves under pressure of live air or deadline: Tamerlan and Dzhokar Tsarnaev are not simply "the Marathon bombers," or "murderers," or "Chechens," or "immigrants," or "Muslims." They might turn out to be all of those things. They might not. The one thing we know for sure is that they are not only those things. They had friends and families and lives. They had YouTube accounts and Twitter feeds. They went to class. They went to work. They came home, and they left it again.

And then they did something unimaginable.

Not all that unimaginable if you are familiar with Chechens, who have, after all, been the subject of some of the greatest writers in the history of Russian literature.

That the brothers Tsarnaev are more than the labels we would hastily apply to them is obvious, I know. Then again, labels are especially tempting amidst the twin confusions of breaking news and municipal lockdown. Stories like the one that has now been shorthanded as the "Boston Bombing," or the "Marathon Bombing" — among them "Aurora," "Newtown," "Columbine" — have their cycles. And we have entered the time in the cycle when, alleged culprits identified, our need for answers tends to merge with our need for justice. We seek patterns, so that we may find in them explanations. We confuse categories — "male," "Muslim" — with cause. We focus on contradictions: He had a girlfriend, and killed people. She was a mother, and a murderer. And we finally take refuge in comforting binaries — "dark-skinned" or "light-skinned," "popular" or "loner," "international" or "homegrown," "good" or "evil" — because their neat lines and tidy boxes would seem to offer us a way to do the thing we most crave right now: to put things in their place.

The problem is that there is no real place for the Boston bombings and their aftermath, just as there was no real place for Aurora or Columbine or Newtown. Their events were, in a very literal sense, outliers: They are (in the U.S., at least) out of the ordinary.

But not in Chechnya, Dagestan, and other places within easy driving distance of Grozny.

They were the products of highly unusual sets of circumstances — of complexity, rather than contradictions.

But it's that kind of conversion process — people into People — that led, this week, to the public fears that the bombers would turn out to be Muslim. It's the process that led, two days ago, to headlines like "In Boston Bombing, Muslims Hold Their Breath" and "For Muslim Americans, Boston Bombings Bring Added Anxiety" — and that led, this morning, to stories about Muslim leaders now "fearing a backlash." The sad assumption carried in these reports is that Americans lack the intellectual equipment and moral imagination to tell the difference between an individual and a group. It's an assumption that has, in the past, occasionally proven valid.

Yet it's also symptomatic of a tendency, in the media and beyond it, to privilege caricatures over characters. Particularly when we have so much access to people's interior lives through social media — this Twitter feed seems to be Dzhokar's, and it is revealing — we have new license to think beyond categories (and metaphors, and stereotypes). We have new ways to bolster our categories — "Muslim," "Chechen," "Causasian" — with the many caveats they deserve. The Tsarnaev brothers may have been Muslim, and that circumstance may have, in part, motivated them in their actions on Monday. They may have been Chechen. They may have been male. But that was not all they were. Their lives were like all of ours: full of small incongruities that build and blend to drive us in different directions. ...

One day, the brothers left it for Boston. And to understand why they did that — to have even a prayer of progressing towards a world where two more young men don't do that — we have to embrace complexity.

Now this is the kind of intelligent-sounding boilerplate that gets churned out whenever anybody from a vibrant demographic does anything stereotypical. To extrude this kind of text, you don't have to actually know anything. In fact, the implicit message is fundamentally anti-knowledge: do not notice patterns, do not see what is in front of one's nose because one should be stabbing oneself in the eyeballs with Occam's Butterknife.

The liberal urge to know nothing appears to be increasing as learning becomes easier. Lately, I've been typing in search engines the names of world famous Russian writers along with words like "Chechen." I haven't yet found anything by Nabokov or Chekhov on Chechens, but, like Tolstoy and Lermontov, Solzhenitsyn wrote about them.

The Jamestown Foundation is in the misbegotten business of trying to bring Chechens to the United States as refugees, but here are some excerpts they've collected from Solzhenitsyn's works:

As the cycle of revenge and counter-revenge between Chechens and Russians continues to spiral downward, it is worthwhile to pause for a longer view. The greatest Russian nationalist of the 20th century, Aleksandr Solzhenitsyn, provided some occasional glimpses of the Chechens in his classic of three decades ago, "The Gulag Archipelago." In Part V he described a 1949 escape by two Slav prisoners from a labor camp in Kazakhstan. Desperate for food, they stole a cow from a village but were caught.

In Solzhenitsyn's words, "They were taken to the village and locked up. The people shouted that they should be shot out of hand and no mercy shown to them. But an investigating officer arrived from the district center with the picture sent around to assist the nationwide search, and addressed the villagers. 'Well done!' he said. 'These aren't thieves you've caught, but dangerous political criminals.' Suddenly there was a complete change of attitude. The owner of the cow, a Chechen as it turned out, brought the prisoners bread, mutton, and even some money, collected by the Chechens. 'What a pity,' he said. 'You should have come and told me who you were and I'd have given you everything you wanted!' (There is no reason to doubt it; that's how the Chechens are.) Kudla burst into tears. After so many years of savagery, he couldn't stand sympathy."

In his detailed account of the 1954 revolt at the Kengir labor camp in Kazakhstan, Solzhenitsyn observed that "there is more than one side to the Chechens. People among whom they live—I speak from my experience in Kazakhstan—find them hard to get along with; they are rough and arrogant, and they do not conceal their dislike of Russians. But the men of Kengir only had to display independence and courage—and they immediately won the good will of the Chechens! When we feel that we are not sufficiently respected, we should ask ourselves whether we are living as we should."

Comparing the various ethnic groups exiled to the most remote corners of the Soviet Union, Solzhenitsyn concluded that "there was one nation which would not give in, would not acquire the mental habits of submission—and not just individual rebels among them, but the whole nation to a man. These were the Chechens....They had been treacherously snatched from their home, and from that day they believed in nothing....The years went by—and they owned just as little as they had to begin with. The Chechens never sought to please, to ingratiate themselves with the bosses; their attitude was always haughty and indeed openly hostile. They treated the laws on universal education and the state curriculum with contempt, and to save them from corruption would not send their little girls to school, nor indeed all of their boys....They were capable of rustling cattle, robbing a house, or sometimes simply taking what they wanted by force. As far as they were concerned, the local inhabitants, and those exiles who submitted so readily, belonged more or less to the same breed as the bosses. They respected only rebels."

"In our books and schools we Europeans read and pronounce only words of scorn for this savage law, this cruel and senseless slaughter. But it seems that this slaughter is not so senseless: it does not stop but strengthens the mountain nations."

On a Saturday, I posted a Youtube clip of Chechens' driving. It turns out Solzhenitsyn was struck by something similar:

In carjacking a Mercedes, then stopping at a gas station to pick up some snacks, which led to them getting into a car chase in which they threw pipe bombs out the windows injuring several cops, followed by a spectacular firefight, the Bomb Brothers were living the Chechen Dream.