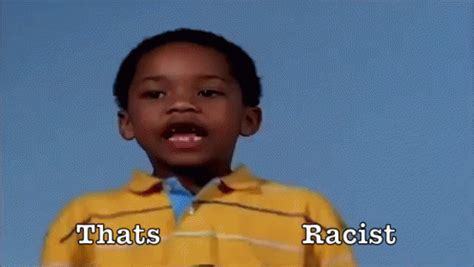 Jonah Goldberg is a Republican writer who makes a pretty good living bashing “liberals” and, as I recall, is sometimes funny, while doing so. He generally avoids the topic of race, and a good thing, that, but once every year or two, he just can’t help himself, and tries to talk about race … without talking about race. It’s the Republican way.

Well, he just had one of his episodes. In “‘That’s Racist’: The accusation becomes a punch line,” Goldberg talks about blacks’ second-favorite phrase.

Goldberg is chugging along, on the way to expose the dishonesty behind racist blacks’ attempts at “explaining” the mockery behind the ironic use of the phrase, but never gets there. Suddenly, the Republican version of the pc (socialist/communist) deus ex machina, the non sequitur, comes down from the stage’s ceiling to save Goldberg from speaking a home truth about race in America, turning his column into an exercise in Republican disinformation.

It’s a comedic catchphrase these days, popularized by an online clip from a 2005 TV show Wonder Showzen on MTV2….

Perhaps the greatest sign that the punch line has gone mainstream came last week when NPR’s All Things Considered reported on “that’s racist.” Correspondent Neda Ulaby explored how a phrase once considered one of the most serious accusations possible has become a gag line. The only problem? It’s not clear she actually gets the joke.

Ulaby relied heavily on Regina Bradley, who teaches African-American literature at Florida State University. Bradley admits her students say “that’s racist” all the time: “They were simply using it to lump discussions of race and race discourse all together. Because they were just saying because we brought up issues of race that was considered to be racist.”

Okay, so apparently the reason these kids say “that’s racist” is that they’re not too bright. But, wait, there’s more. According to Ulaby, Bradley also believes that the students are using the joke to establish up front that they themselves aren’t racist. Good for them!

Hold on, another explanation is that kids simply mimic the stuff they see on TV shows like 30 Rock and South Park.

I don’t want to overanalyze, but it seems as if everyone’s bending over backward to come up with the least obvious explanations for a pretty obvious joke.

We’re never told. Instead, we get a NPR tutorial on the persistence of racism. “Scholar [Hahaha!] Regina Bradley says it also works because racism’s often expressed differently than from a generation or two ago,” Ulaby explains. “The segregated neighborhoods and swimming pools of Bradley’s grandparents have yielded to more subtle forms of discrimination. That’s reflected in how ‘that’s racist’ is being used — to shut down conversations or as a joke.”

But what’s the joke? We don’t find out until a 14-year-old-boy says it plainly: “I think I or other people just sort of do it as a way of mocking people who are overly sensitive about race issues.”
Bingo!

NPR could have done the whole story in 30 seconds. But instead it spent more than five minutes trying to grapple with a wonderful yet utterly inconvenient truth for the ostentatiously liberal network: Young people just aren’t as uptight about race as their parents, never mind their grandparents, are. [Young people today receive diversity training in school, church, on TV, and in many afterschool activities. How could they possibly not be “uptight about race”?] And, by the way, the days of segregated swimming pools and neighborhoods haven’t merely “yielded” to “more subtle forms of discrimination”; they’ve yielded to — wait for it — less discrimination. [Less discrimination against blacks, he means, but what about the pervasive discrimination against whites, including segregated “public” swimming pools?]

No, racism hasn’t vanished. [Which kind?] And the legacy of racism has a long half-life. [He’s kidding, right?]

But the simple fact is “that’s racist” is the sort of thing those darn kids today say to make fun of their aging Gen X and baby-boomer parents….

Non sequitur! They’re making fun of racist blacks. But he knew that, right? He can’t possibly be as dim as he appears… right?

By the way: Racist blacks are still using their second-favorite phrase to terrorize whites, often in conjunction with the hoax charge that the whites in question used blacks’ favorite phrase of all.

A tip ‘o the do-rag to James Fulford.