Demographic change is merciless, as is painfully obvious. When a country (the United States) permits the entrance of millions from a highly dissimilar society (Mexico) with many objectionable cultural attributes (e.g., violence against women, dislike of education, fondness for crime), then we shouldn’t be surprised that the foreigners’ unpleasant diversity can be harmful to our values and economy.

Two of every three Texas children are now non-Anglo and the trend line will become even more pronounced in the future, said Murdock, former U.S. Census Bureau director and now director of the Hobby Center for the Study of Texas at Rice University.

Today’s Texas population can be divided into two groups, he said. One is an old and aging Anglo and the other is young and minority. Between 2000 and 2040, the state’s public school enrollment will see a 15 percent decline in Anglo children while Hispanic children will make up a 213 percent increase, he said.

The state’s largest county – Harris – will shed Anglos throughout the coming decades. By 2040, Harris County will have about 516, 000 fewer Anglos than lived in the Houston area in 2000, while the number of Hispanics will increase by 2.5 million during the same period, Murdock said. The projection assumes a net migration rate equal to one-half of 1990-2000.

Most of the state’s population growth is natural, Murdock told the House Mexican American Legislative Caucus today. About 22 percent of the growth comes from people moving to Texas from other states.

About 6 percent of the state’s population is not documented, he said.

Of the state’s 254 counties, 79 recorded declining population during the past 20 years. All are rural. An additional 30 Texas counties, he said, would have also lost population had they not experienced Hispanic growth.

The state’s future looks bleak assuming the current trend line does not change because education and income levels for Hispanics lag considerably behind Anglos, he said.

Unless the trend line changes, 30 percent of the state’s labor force will not have even a high school diploma by 2040, he said. And the average household income will be about $6,500 lower than it was in 2000. That figure is not inflation adjusted so it will be worse than what it sounds.

“It’s a terrible situation that you are in. I am worried,” Murdock said.

Below is a kindergarten class in Mesquite, Texas, which is described as “bilingual.” However, a close look at the alphabet reveals that it is Spanish, not English. The fish picture is denoted as a “P” word, “pesces.” And the flag (B, “bandera”) is Mexican. For more details, see the original February 17 article from the Associated Press, Census shows huge Hispanic growth in Texas. The photo does not suggest a pro-America curriculum, the sort described by Victor Davis Hanson in The Civic Education America Needs. 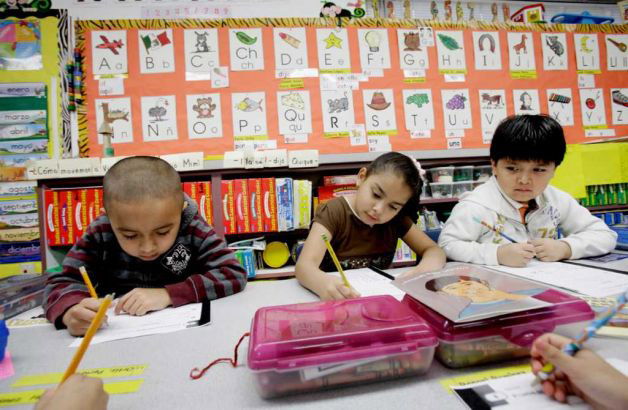