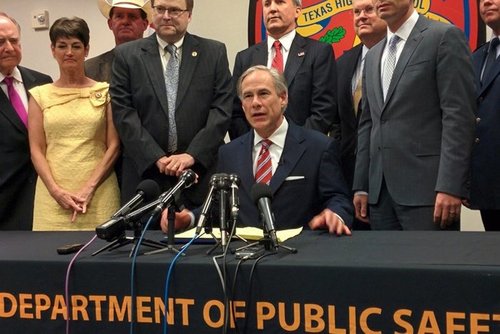 Texas Governor Greg Abbott has signed what is describe as a "sweeping border security bill"— what exactly is it?  According to the Texas Tribune:

HOUSTON – To Gov. Greg Abbott, signing a sweeping, multimillion-dollar border security bill hundreds of miles from the Rio Grande made sense.  “Here in Houston, there are more than 20,000 dangerous gang members that are associated with cross border traffic-related crime,” Abbott said Tuesday as he was flanked by lawmakers and peace officers at a Texas Department of Public Safety facility. “More than 100,000 of those gang members operate across the state of Texas.”

His signature on House Bill 11, by state Rep. Dennis Bonnen, R-Angleton, is the final piece of a massive effort by lawmakers during the 84th Legislature to bolster the ranks of state police, increase technology and establish intelligence operations units on the Texas-Mexico border. The bill has a price tag of about $310 million and is part of an $800 million border security effort.

The measure will facilitate the hiring of additional troopers and give the Department of Public Safety the authority to expedite the hiring of certain military veterans who have been honorably discharged. It also increases penalties for human smuggling and creates a transnational intelligence center on the border to analyze crime data. In addition, the law continues the operations of the Texas National Guard on the border until the department can hire and train up to 250 troopers to be permanently stationed in the area. Abbott Signs Sweeping Border Security Bill By Julian Aguilar, Texas Tribune, June 9, 2015

Well, it seems like most of it could be useful if it's done properly, but it's hardly "sweeping".  And what exactly is a "transnational intelligence center"?

I have made my own proposal for the state of Texas, I invite Governor Abbott and Texas lawmakers to read it here:Texas' Rick Perry Could Seal the Border Himself - If He Had The Will. All you have to do is erase "Rick Perry" and write in "Greg Abbott" and the proposal would be the same.

Here's what the SRE declared (my translation):

The government of Mexico laments the promulgation of the HB11 law on the part of the government of Texas...it considers that the legislation foments the division of our societies and is opposed to the principles and values that govern the bilateral relations between Mexico and the United States.

"Division"?   A border by definition means "division".   There should be a division between two bordering nation-states.

the government of Mexico will be attentive that the implementation of this law does not affect the rights and the dignity of its nationals and will provide the necessary consular assistance to the Mexican community in that state.

In other words, the Mexican government plans to continue meddling.   Remember, in Mexico, anybody of Mexican ancestry in the United States is considered Mexican.