Its been an interesting week in American border non-security. News came out a few days ago that ISIS was running a camp in Mexico just eight miles south of the US, according to Judicial Watch:

[. . .] Judicial Watch sources said that coyotes working for the notorious Juarez Cartel are smuggling Islamic State terrorists across the U.S. border between the New Mexico cities of Santa Teresa and Sunland Park, as well as through the porous border between Acala and Fort Hancock, Texas. [. . .]

Why wouldnt ISIS operate a base in Mexico, given the disinterest in border security decreed by the Obama administration? Next thing, the jihadists will be opening an office on K Street in Washington to lobby Democrats more easily.

More recently, photos have appeared showing drugs and guns being transported north it looks too easy to be called smuggling like they were going from Sacramento to Fresno. The cameras have been placed by the Texas Department of Public Safetys Operation Drawbridge which was responsible for more than 29,300 apprehensions and 88,400 pounds of drugs being seized in 2014. 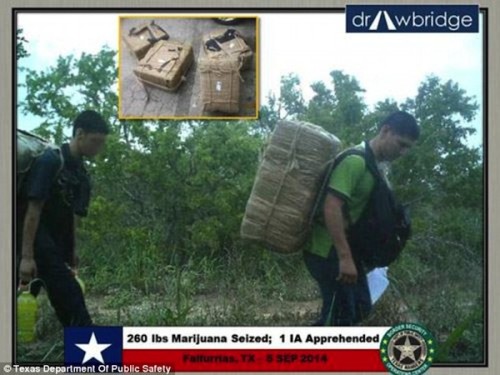 CARLSON: The video doesnt lie: people seem to move unimpeded across the border with drugs and guns.

FITTON: Well thats right and a lot of these folks also help illegal aliens come here and they rely on the distraction of bringing those people up often allow them to do this other activity and they often force these other illegal aliens to carry the drugs for them, but what it exposes is the lack of security on the border.

Im glad these cameras are there to demonstrate whats happening. Im sure theres a good law enforcement purpose, but your viewers should know theres really no fence of much significance on the border. They have only 37 miles of the sort of fencing you would understand to prohibit people from crossing. The rest is just vehicle barriers and things that can be stepped over. Its a real crisis on the border its unsecured. We hear about ISIS in Australia, in Kansas and Ohio, but were supposed to pretend that its not in Mexico potentially. . . The drugs, the guns, the national security threat is a real issue there.

Apparently Texas authorities are hoping that embarrassing the feds will force them to become more responsible about protecting the country.

The Texas Department of Public Safety released images this week showing individuals walk across the southern border at night — in many cases carrying drugs or firearms.

The pictures were captured by a network of motion-detection cameras placed on the Texas-Mexico border as part of a program in collaboration with the U.S. Customs and Border Protection called Operation Drawbridge.

Authorities say the program was responsible for more than 29,300 apprehensions and the seizure of 88,400 pounds of drugs in 2014.

“These results represent a significant impact in the effort to combat Mexican cartel smuggling operations,” the Texas DPS said in a statement.

Authorities in Texas say they don’t have the manpower to blanket the entire southern border with personal. Instead, they rely on Operation Drawbridge cameras to alert them to individuals crossing the border. Law enforcement is then deployed to the scene.

“Every day, sheriff’s deputies, police officers, Border Patrol agents and state law enforcement officers in the Texas border region risk their lives to protect Texas and the entire nation from Mexican cartels and transnational crime,” Texas DPS director Steven McCraw said. “This innovative use of technology has proven to be a force multiplier in detecting the smuggling attempts along the border, which is critical to interdicting criminal activity occurring between the ports of entry.”

Images released by the Texas DPS show groups of individuals crossing the border. Texas DPS highlighted some who were armed with high-powered firearms as they crossed.

“Any time law enforcement interdicts a smuggling attempt, we consider it a significant gain in the fight against the cartels and their operatives,’ McCraw said. “The collaborative law enforcement efforts of Operation Drawbridge have bolstered our ability to combat the exploitation of our border by these ruthless criminals.