Smart machines, from robots to computers, are creating a tsunami of change in the workplace, yet many refuse to see the revolution and cling desperately to the old idea that jobs being swept away by technological change will be replaced by new ones.

One hint of the big change is the chart showing productivity and employment splitting several years ago, after running on a parallel track for decades: 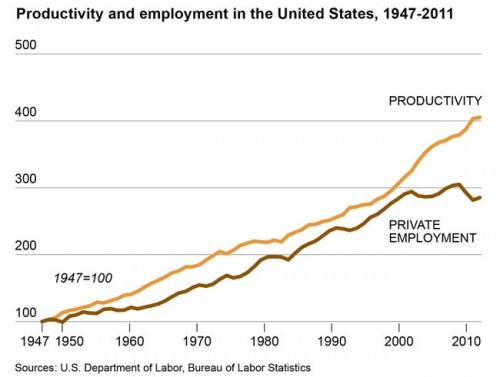 Just a month ago the USA Today editorial staff shrieked its alarm about an imagined shortage of workers based on Boomer generation retirement (an idea popular with amnesty salesman Paul Ryan) and recommended More Immigration as the cure:

Beyond jobs numbers, labor shortage looms: Our view, USA Today, The Editorial Board, May 7, 2015

Given all that has happened in the economy recently — a decade and a half of stagnant wages, a punishing recession and a sluggish jobs recovery — the idea of a labor shortage might seem preposterous. Monthly job numbers coming out Friday wont show any sign that one is developing.

But the data pointing to such a shortage are compelling. And a growing number of economists are urging people to look beyond the monthly reports at a broad demographic shift.

America is about to run short of workers for the simple reason that people are retiring. The oldest of the Baby Boomers are now 69 and leaving the workforce. Meanwhile, the retiree population is growing at the other end as people live longer. [. . .]

Good grief! Don’t these editors read their own newspaper, which has reported on the robotics revolution that is moving into whole new categories of jobs? USA Today articles have included Could a Robot Do Your Job? (Oct 28, 2014), Robots Could Take Half of German Jobs (Jan 13, 2015), 15,000 Robots Usher in Amazons Cyber Monday (Dec 2, 2014), and others.

And America certainly doesn’t need more immigrants to do jobs that don’t exist now or won’t in a few years. The urban underclass is already angry at the lack of jobs and opportunity, and the government shouldn’t add millions to the ranks of the unemployable.

But serious thinkers are warning that this technological transformation is not like earlier ones such as the industrial revolution, which included the famed Luddite revolt of workers who destroyed new textile machines in fear of losing their jobs. Martin Ford, author of the recent book “Rise of the Robots: Technology and the Threat of a Jobless Future,” cautions that this time is different: the new machines are “going to be genuinely disruptive as these technologies encroach increasingly in the service sector and in office jobs and white-collar jobs and so forth.”

Now there’s another voice warning of severe social dislocation from technology, the author of a new book, A Dangerous Master: How to Keep Technology from Slipping Beyond Our Control. The author Wendell Wallach is an ethics scholar at Yale, and he has been a critic of technological aspects of modernity. Like Martin Ford, he believes wealth redistribution is the answer to technological unemployment but inquiring minds wonder if a more conservative cure can be created. Possible?

We have reached a tipping point where technology is now destroying more jobs than it creates, researcher warns, Business Insider, June 3, 2015

The technology is here. But the jobs are nowhere to be found.

Thanks to the efficiency of the internet and automated systems, productivity and GDP have grown during the last few decades, but the middle class and jobs are disappearing.

In fact, we have reached a tipping point where technology is now destroying more jobs than it creates. And if the trend continues we could face a serious crisis in the US and abroad, said Wendell Wallach, a consultant, ethicist, and scholar at the Yale University Interdisciplinary Center for Bioethics.

Technological unemployment is the concept of technology killing more jobs than it produces. And while the fear has been considered a Luddite fallacy for the past 200 years, it is now becoming a stark reality, he said.

“This is an unparalleled situation and one that I think could actually lead to all sorts of disruptions once the public starts to catch on that we are truly in the midst of technological unemployment, Wallach said during a presentation at the Carnegie Council for Ethics and International Affairs on Tuesday.

And yet, there are no signs of the trend reversing. Because technology is evolving faster than ever before with little to no oversight or regulation, the likelihood of more jobs being replaced by new tech is at an all-time high, Wallach told Business Insider.

In fact, some 47% of present jobs in the United States could be computerized in the next 10 to 20 years, according to an Oxford University study published in 2013.

Wallach, who authored “A Dangerous Master: How to Keep Technology from Slipping Beyond Our Control,” said that as new technologies continue to displace workers, wage stagnation in the U.S. and around the world will also continue to grow.

Traditionally, productivity, jobs, hourly wages and income all grew in unison. However, during the last 30 years GDP and productivity grew while the US median income stopped and employment flattened, Wallach writes in his new book. Technology innovation has played a significant role in this trend.

“For most of our history 50 percent of GDP went to wages and 50% went to capital, and we are seeing a radical alteration in that largely because of the anomalies of money being made in high tech industries,” he said. “That’s not anybody doing anything wrong, that’s just technology industries are different from old manufacturers.

So, for example, in 1990 GM Ford and Chrysler brought in $36 billion in revenue and hired over a million workers, Wallach said. The big three today — Apple, Facebook and Google — bring in over a trillion dollars in revenue and only have about 137,000 workers, he said.

This change has created a situation where more and more of the capital is going to a smaller percent of the population. In fact, we are on course for 70% of stock ownership to be held by 5% of the population, Wallach said.

This is a dangerous scenario because it could potentially lead to massive social unrest, possibly even revolutions.

When people no longer receive the money from wages they need to support their families, it is hard to know what they will do, but in the past and in other countries this has been thought of as a situation ripe for a revolution, Wallach said.

However, he added, that such a crisis could be averted if government take action to fix wealth distribution.

That kind of dire responds can of course be avoided through welfare reforms or job subsidies, but these would require redistributing some of the capital growth achieved through from increased productivity, he said.