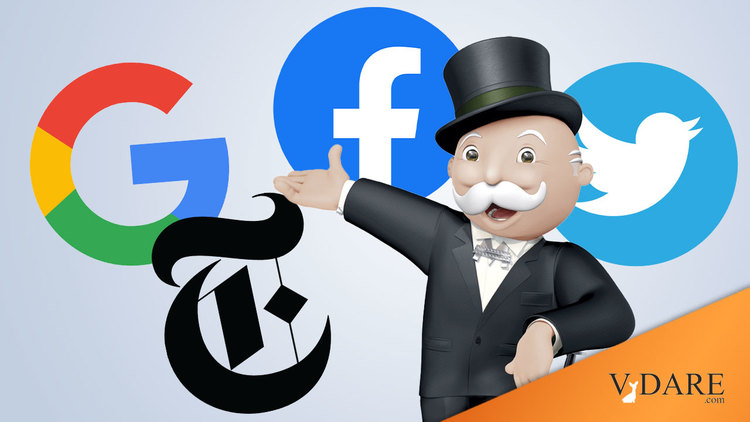 And then there is the New York Times, which needed to be bailed out by Mexican monopolist Carlos Slim in 2009, but is now starting to enjoy some of that monopoly magic itself.

In its fourth-quarter earnings report, The New York Times Company said 2020 was its biggest year for adding subscribers.

… After adding 2.3 million digital-only subscriptions in 2020, more than in any previous year, The Times exceeded 7.5 million subscriptions for its digital products and print newspaper, The New York Times Company’s fourth-quarter report said. …

For the year, The Times’s primary digital offering, its news product, gained 1.7 million subscribers, a 48 percent increase over 2019. More than five million Times subscriptions are for the news product alone …

The subscription gains last year put The Times on its way to achieving its stated goal of reaching 10 million by 2025. The increase occurred even as The Times, which started charging for online content in 2011, raised the prices of some digital news subscriptions.

The standard NYT digital subscription is $221 per year, over twice that of the WaPo but less than half that of the WSJ.

“With a billion people reading digital news, and an expected 100 million willing to pay for it in English, it’s not hard to imagine that, over time, The Times’s subscriber base could be substantially larger than where we are today,” Ms. Levien, who succeeded Mark Thompson as chief executive in September after seven years at The Times, said in a statement.

The company also announced an increase in its dividend payments to investors, to 7 cents a share from 6 cents, which will cost the company about $46.8 million a year. It was the second time within a year that the board had agreed to raise the dividend, a move that will benefit the Ochs-Sulzberger family that controls The Times.

The NYT has always been the apex predator of journalism due to its influence on other journalists, but now it is also starting to pull away in the race for subscribers.