Over at Your Lying Eyes, Ziel has some scatter charts up correlating, for all 50 states, teacher's pay (relative to the state's median income and the state's median white income to account for the sizable cost of living adjustments of today) with NAEP 8th grade reading scores for white students (to take the whole race thing out of play for once in educational statistics.)
The correlation between teacher pay and student performance is fairly low. And it's negative. (Click on the graph to see it readably large.) 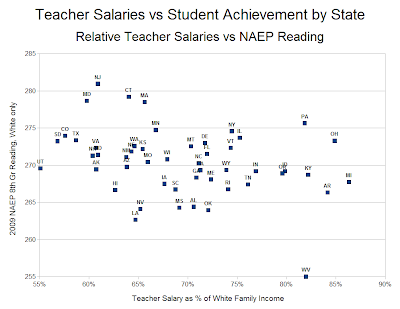 Oddly enough, the best bargains would appear to be found in four unionized Atlantic seaboard states: Maryland, New Jersey, Connecticut, and Massachusetts. (It could be that unionized states spend more on pensions and benefits: I don't know.) Of course, those are states containing suburbs of three high income / high IQ metropolises: DC, NYC, and Boston. The worst pay-performance bargain, by far, is in West Virginia. In other words, we see the Lucky Jim Rule in action again: "There was no end to the ways in which nice things are nicer than nasty ones." If you have a lot of smart, highly paid people in your state, life is good.
If you look at teacher's pay relative to overall income, California looks like it's getting a bad deal, with mediocre white student performance and teacher's pay the third highest relative to the state's median income. But California's median income is very low relative to its cost of living due to all the fast food workers the federal government, in its infinite wisdom, has allowed into California over the years. If you compare teacher's pay to the median income of white households (which I think is a more reasonable comparison for a college grad's job — granted, not always the hardest major to degree in), then California is merely mediocre, although Texas is still getting a better deal.

California's essential problem is that a huge fraction of Californians can't afford to live in California.

In general, I think much of the hoopla over the educational impact of teachers' unions is overstated. Are teachers' unions really keeping NAM students from living up to their unlimited potential? I dunno ...

The whole teachers' union topic is so popular to argue about in part because it gives white people something to blame each other for without mentioning the quality of the students.