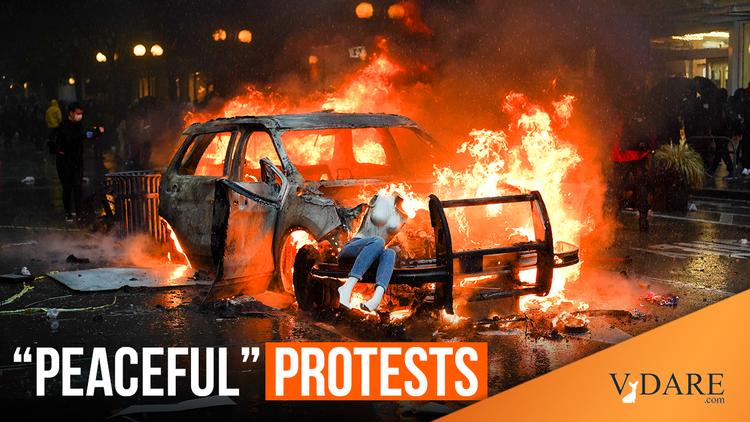 Take That, Trump: A Study Finds That Peaceful Protesters Have Rioted Fewer Than 617 Times in Not Quite 220 Cities!

A three-person leftist think tank has proved that the Peaceful Protests have been overwhelmingly Peaceful (except for the approximately 600 riots in the more than 200 cities that they have recorded).

Corporate Twitter.com is pushing this story:

A report produced by the Armed Conflict Location and Event Data Project (ACLED) found that of the 7,750 protests linked to the Black Lives Matter movement that took place in the US between May 26 through August 22, only 220 were not peaceful. The report further states that for those considered “violent,” the upheaval was “largely confined to specific blocks, rather than dispersed throughout the city.”

I’m reminded of the scene in Mars Attacks! where the President encourages the public to look on the bright side of the Martians ray-gunning a joint session of Congress:

Update: iSteve commenter res points out that Twitter.com’s assertion that the report says that “only 220 were not peaceful” is not true. What the report says is that there were riots in fewer than 220 different locations around the country. Of course, many of these not quite 220 cities have suffered multiple riots, such as Portland.

Here’s some background from this leftist organization’s report: Also, keep in mind that the dates mapped are just up through August 22, which was two days before the Jacob Blake riots started.

Between 26 May, the day after Floyd’s death, and 22 August, ACLED records over 7,750 demonstrations linked to the BLM movement across more than 2,440 locations in all 50 states and Washington, DC.
…
An Overwhelmingly Peaceful Movement

The vast majority of demonstration events associated with the BLM movement are non-violent (see map below). In more than 93% of all demonstrations connected to the movement, demonstrators have not engaged in violence or destructive activity. Peaceful protests are reported in over 2,400 distinct locations around the country. Violent demonstrations, meanwhile, have been limited to fewer than 220 locations — under 10% of the areas that experienced peaceful
protests.

So, America has had far more than 220 riots this summer (there have been approaching half that many in Portland alone). What this leftist group found were violent demonstrations in nearly 220 different locations around the country. If we knew the average number of riots per location we could calculate the total number of riots, which might be approaching four figures.

The leftist group’s report doesn’t mention the total number of riots, but when I go into their underlying data I see them listing 617 riots from May 25 thru August 29, the vast majority involving BLM, Antifa or other leftist groups.

Please note, though, that not every single one of these 617 riots was related to the media-proclaimed “racial reckoning.” For example, there was an Armenians vs. Azerbaijanis donnybrook that broke out at a protest in Los Angeles on July 21st. But the vast majority of the 617 riots (so far) of the Summer of George have been BLM-related.

So, let’s call it approaching 600 separate riots by the Peaceful Protesters in nearly 220 locations.